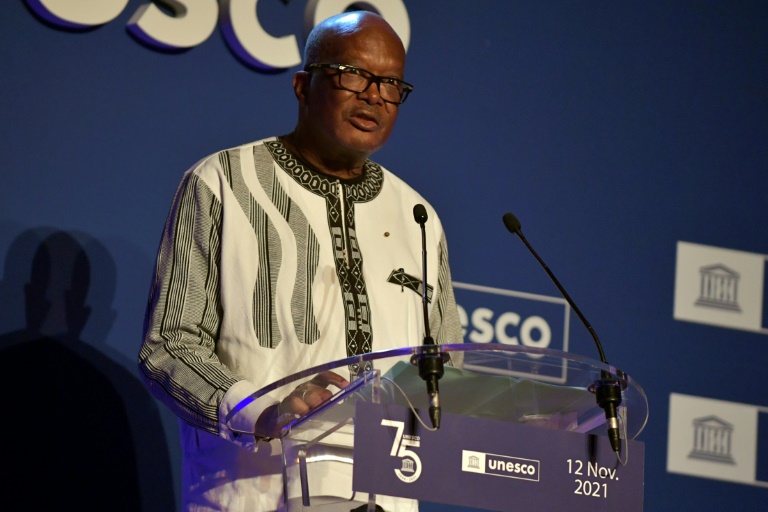 Kabore, seen during 75th anniversary celebrations of UNESCO in Paris in November, vowed to stem jihadist violence but his failure to do so has hit his credibility with the military

OUAGADOUGOU - Burkina Faso President Roch Marc Christian Kabore, whose fate was uncertain Monday following an army mutiny, was once seen as embodying hopes for change and development in a West African nation now under siege from jihadists.

The impoverished Sahel state of 21 million people placed its hopes in the affable consensus-building Kabore when voters first elected him in 2015, a year after a popular insurrection toppled strongman Blaise Compaore.

However, it was also in 2015 when armed jihadist groups started to launch attacks in Burkina Faso and have intensified them ever since.

When he was re-elected for a second term in 2020, jihadists were launching attacks virtually daily, and had killed hundreds of people.

The security forces appeared incapable of stopping the violence as whole swathes of the country slipped out of government control.

So Kabore campaigned on the promise that he would make defeating the jihadists his priority.

Casting himself as a father figure promoting national unity, Kabore also promised to foster dialogue and "continuous consultation" over his second five-year term.

Yet the attacks and massacres in the north of the country continue, like those in the village of Solhan in June 2021 when 132 civilians were killed, and in Inata in mid-November when 53 gendarmes and four other people died.

Since then, angry demonstrations in jihadist-hit communities have been multiplying to denounce the "impotence" of the authorities -- demonstrations that are more often than not crushed by the police.

Kabore, a former banker from the majority ethnic Mossi and a devout Roman Catholic in a largely Muslim country, made several changes at the head of the army and government but to no avail.

A poorly trained and equipped army has failed to overcome the threat.

Kabore's People's Movement for Progress (MPP) has during his presidency showcased achievements in building roads, improving health and providing access to clean water.

But the ongoing violence, which has forced thousands of schools to close, has overshadowed any gains.

However, pointing to the scale of the unrest, his detractors say he has lost his grip on the country.

A diplomat in neighbouring Ivory Coast once dubbed him "a kind of diffident king who holds plenty of meetings and listens from his armchair without taking decisions."

Opposition figure Fousseny Ouedraogo said Kabore earned the nickname the "diesel president" for his slow pace, pointing to the time he took to appoint a prime minister and reshuffle the cabinet.

During Compaore's reign Kabore was appointed minister several times, and he was prime minister from 1994-96.

He led the ruling Congress for Democracy and Progress (CDP) party for more than a decade and was seen as Compaore's likely heir, even joining the group that in 2010 began amending the constitution to keep the strongman in power.

But Kabore abruptly fell out of favour in 2012 and was reduced to a mere "political adviser" -- a move that eventually proved to be a blessing in disguise.

Early in 2014, Kabore broke with the CDP to form the MPP, catapulting him to power in a vote widely seen as sealing the transition to democracy.

As a student in the French city of Dijon, Kabore was a committed leftist, and when Burkina's revered Marxist leader Thomas Sankara took power, he became the director of the International Bank of Burkina before he had even turned 30.

When Sankara was gunned down in 1987, Compaore took over the reins. Kabore moved into politics two years later and rose through the ranks, becoming prime minister in 1994 before becoming a special presidential advisor two years later