In Kenya, alarm over rise in teen pregnancies during pandemic 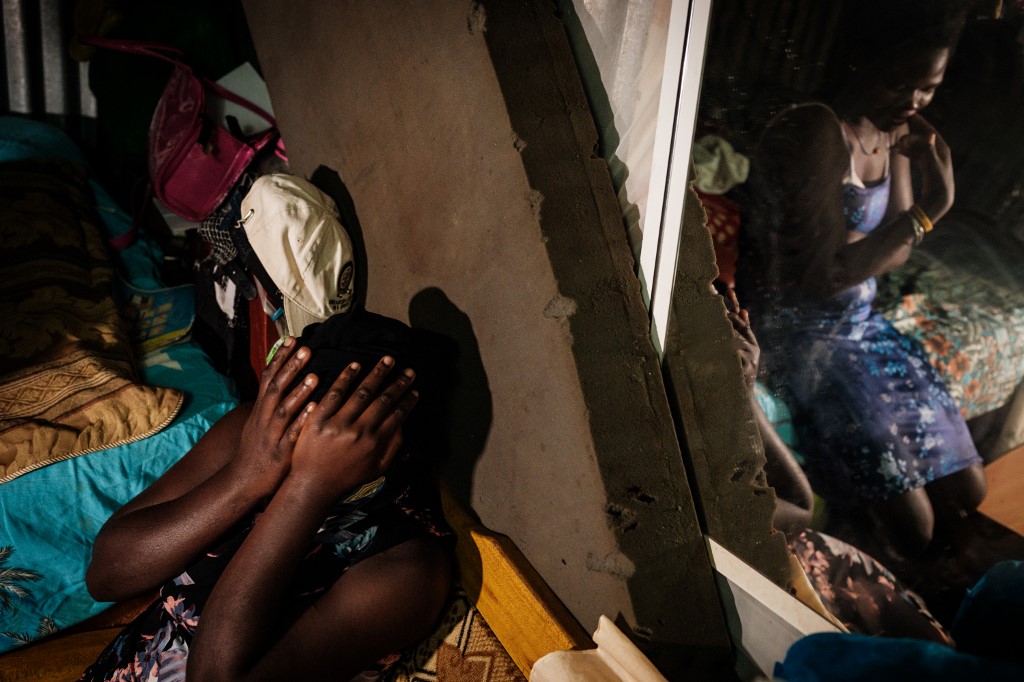 Linet (L), 16, who is around 3 months pregnant covers her face with a hand during an interview for AFP with her sister Carol (in mirror), 22, about Linet's unexpected pregnancy as schools are closed due to the COVID-19 outbreak

KENYA- Sixteen-year-old Linnet covers her face bashfully, mumbling into her hands as she recounts how she met the young man who bought her fries and gave her money, before leaving her pregnant and facing even greater poverty than before.

She is one of thousands of teenagers who fall pregnant every year in Kenya, a problem experts fear is worsening during the coronavirus pandemic, with some girls pushed into transactional sex to survive while others have more sex as they stay home from school.

Shortly before the pandemic hit Kenya in March, Linnet's farmer parents in western Busia sent her to Nairobi to find a job as they could no longer afford her school fees.

She moved in with her sister, her sister's husband -- the sole breadwinner -- and their two small children in a tiny corrugated-iron room in the Kibera slum.

Food was scarce and the advances of the 22-year-old boda-boda (motorbike taxi) rider, and the luxuries he offered, were hard to resist.

"He would buy me some fries, shoes and also give me some money," said Linnet, her dress of brightly-coloured flowers stretched tight against her four-month pregnant belly.

She said she had asked him to wear a condom, but he had removed it during intercourse. He has demanded she terminate the pregnancy, and the romance has dissipated.

"I am too young to be pregnant and now I am going to be a mother to a kid," she said.

'The tip of the iceberg'

Last month, figures from a leaked health ministry document showing thousands of girls had fallen pregnant during lockdown between March and May led to fierce debate on social media.

In Nairobi alone almost 5,000 girls fell pregnant, just over 500 of them between the ages of 10 and 14, according to the figures from a data unit within the ministry.

Both President Uhuru Kenyatta and his Health Minister Mutahi Kagwe have mentioned the rise in teen pregnancies during addresses to the nation.

"Teenage motherhood is a catastrophic, disempowering outcome in the life of a girl. More often than not it spells doom to the teenager's attainment of life's full potential," Kagwe said last month.

Evelyne Opondo, senior Africa regional director at the Centre for Reproductive Rights, said evidence of an uptick in pregnancies directly linked to the pandemic was still "anecdotal".

However she believed the numbers are merely "the tip of the iceberg" as most girls do not seek proper ante-natal care.

She said teen pregnancies were likely increasing during the pandemic because girls were idle at home, or "engaging in relationships for survival".

Some children get free lunches or free sanitary towels at schools, which will remain closed until at least 2021.

Being home also places an added burden on parents who may have lost their jobs.

"So the young girls will turn to men who will be providing them with pocket money, money for pads," Opondo said.

"We have seen this even before the virus so you can imagine how much worse it must be."

Oriema Otieno, a 30-year-old doctor in Embakasi on the outskirts of Nairobi, says he has seen more pregnant girls than usual at his clinic, which is run by a reproductive health NGO.

"Normally with schools open and teens in school we see two in every three months. Now there has been a rise, about seven to eight in one month in this community."

According to Opondo, one of the main drivers of teen pregnancy is ignorance.

"We know that in Kenya there is no comprehensive sexuality education... a lot of girls lack information on how to prevent unintended pregnancies," she said.

A 2017 analysis by the Guttmacher Institute found that, while various policies exist to provide sexual education in Kenya, topics are limited and do not include information on contraception.

It noted that "messages conveyed to students were reportedly fear-inducing and judgemental or focused on abstinence, emphasising that sex is dangerous and immoral for young people."

Meanwhile, the topic is taboo at home.

"Let us not lie to ourselves, our kids are having sex," said Ritah Anindo, 22, a youth advocate for the NGO Reproductive Health Network Kenya.

"Now children are at home, they are not studying. Rich kids, probably they are having online classes but kids in (poor communities), what are they doing?" Anindo said.

"Our kids are idle so what do you expect at the end of it all? Teenage pregnancies, new HIV infections, unsafe abortion."

For many girls like Linnet, hopes of ever returning to school will be fully dashed once they give birth.

"Most of them will not be able to go back to school... it requires a lot of support, financial support, emotional support," Anindo said.

"We may have more teenage pregnancies than COVID cases and it is so sad."