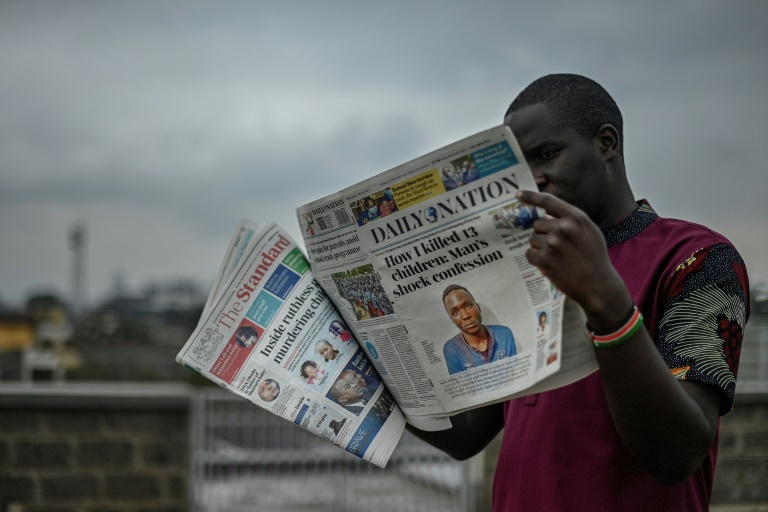 NAIROBI - Kenyan police were on Thursday holding a man described as a "bloodthirsty vampire" accused of the grisly murders of at least 10 children.

Masten Milimo Wanjala, 20, was arrested on Wednesday over the killing of two children whose bodies were found dumped in a forested area of the capital Nairobi.

But in a chilling confession, he admitted to the cold-blooded killing of at least 10 young teenagers, police said.

They described his arrest as a major breakthrough in an investigation into a spate of disturbing child disappearances in Kenya -- almost two a day in recent weeks, according to police.

"Wanjala single-handedly massacred his victims in the most callous manner, sometimes through sucking blood from their veins before executing them," the Directorate of Criminal Investigations (DCI) said on Twitter late Wednesday, describing him as a "bloodthirsty vampire".

The murders, targeting 12- and 13-year-olds, stretch back five years. His victims were drugged and drained of their blood and some of them strangled, police said.

Wanjala's arrest was splashed across Thursday's front pages of the main newspapers in Kenya, with some publishing pictures of the suspect in a blood-stained football jersey.

According to police, Wanjala's first victim was a 12-year-old girl he kidnapped five years ago in Machakos county east of Nairobi.

The murder of his next victim in western Kenya sparked protests, with locals torching the house of the person they suspected killed the boy.

"In a nerve-wracking blow-by-blow account, the murderer recounted harrowing details of how he lured victims to his killer jaws before squeezing (the) dear life out of the innocent children," the DCI said on Twitter.

"Unbeknownst to some of the worried families, their children were long executed by the beast and their remains dumped in thickets. Others were submerged in sewer lines in the city and left to rot away," it added.

Police said he had demanded 30,000 Kenyan shillings (R4,028) from the parents of one teenage boy before killing him.

The bodies of several children feared to have died at Wanjala's hands have yet to be found.

Wanjala was unapologetic over his actions and told detectives he derived "a lot pleasure" from killing his victims.