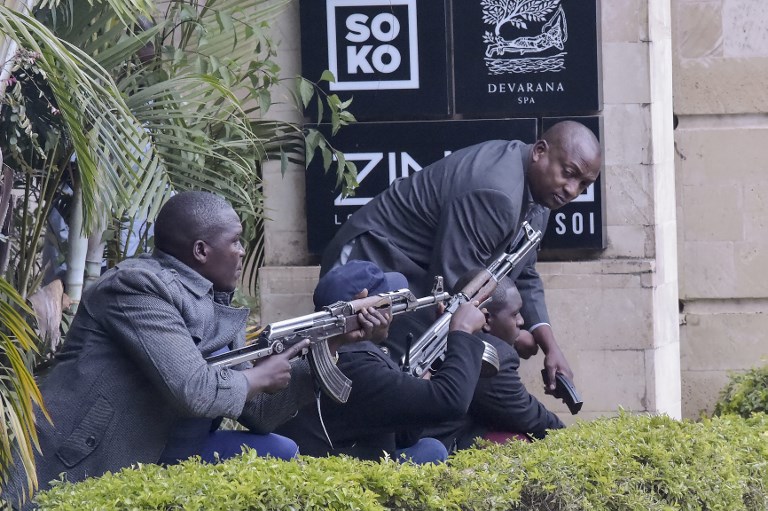 Kenyan security forces arrive at the scene of an explosion at a hotel complex in Nairobi on January 15, 2019. Picture: AFP.

NAIROBI, Kenya - Kenyan police have arrested the wife and father of a man identified as the suicide bomber in an attack on Nairobi's Dusit hotel complex that left 21 dead, a police source said Saturday.

The attacker, one of five Al-Shabaab militants who stormed the complex on Tuesday, was identified as 25-year-old Mahir Khalid Riziki, who grew up in Mombasa.

"The wife of the suicide bomber is now in our custody. She will help us understand her husband's last moments and his movement, his story in latest years and his very last movements," a senior police official said on condition of anonymity.

"She was arrested in Mombasa and has been brought to Nairobi for further questioning," he added.

His father was also arrested.

"In the course of investigation of this nature, close family members of such people are crucial because they hold crucial information," the source said.

The official said Riziki was identified through mobile phone communication, and that he had communicated with one of the other attackers right before blowing himself up.

"He grew up in Mombasa and that is where he was recruited into Al-Shabaab," he said, adding that he had previously been involved in attacks targeting security forces and has previously travelled to Somalia.

That attack by the Somali Al-Qaeda affiliate led to a 20-hour siege at the DusitD2 hotel and office complex, which also left 28 injured while some 700 people were rescued.

The Dusit revealed it had lost six staff members while telecoms company Cellulant also lost six staff. An American and British-South African dual national were also among those killed.