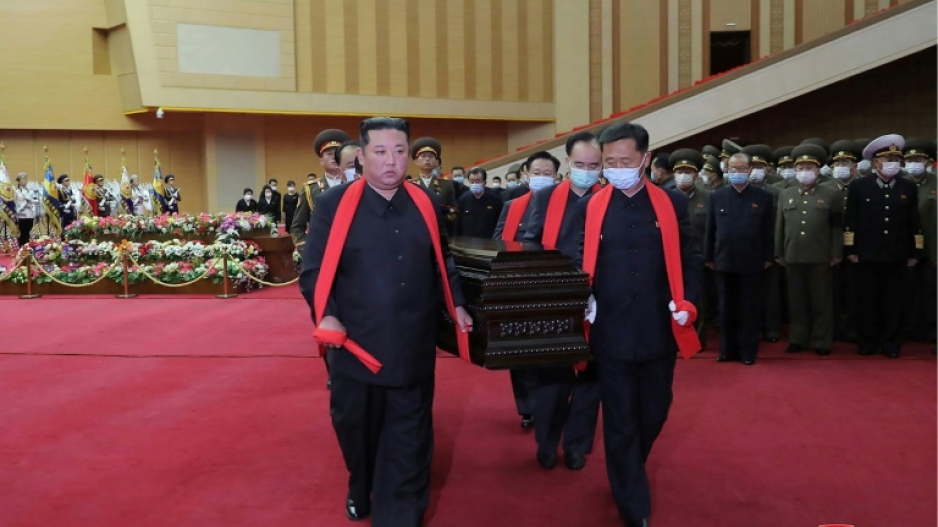 PYONGYANG - A maskless Kim Jong Un was one of the pallbearers at the state funeral for a top military officer, North Korean state media reported Monday, days after Pyongyang claimed the country's COVID-19 outbreak was now under control.

Kim on Sunday attended the funeral of Hyon Chol Hae, a Korean People's Army marshal who reportedly mentored the North Korean leader to take over from his father Kim Jong Il.

The official Korean Central News Agency (KCNA) released photos of Kim, not wearing a face mask, hoisting up Hyon's casket along with other regime officials, who were masked.

Hyon died of multiple organ failure at the age of 87, according to KCNA.

The North Korean leader has put himself front and centre of his country's COVID response, blaming lazy state officials for worsening the Omicron variant-fuelled outbreak.

Over the weekend, KCNA said the epidemic was now "being stably controlled", and reported the death toll "sharply decreased day by day".

Experts question the official claim and tally, given that the impoverished country has one of the world's worst healthcare systems and no COVID-19 drugs or mass testing ability.

It has not vaccinated any of its roughly 25 million people, having rejected jabs offered by the World Health Organization.

North Korea announced its first coronavirus case on May 12, despite a two-year blockade maintained since the start of the pandemic.

Pyongyang reported 167,650 "fever" cases on Monday via KCNA, a notable drop from the peak of around 390,000 reported about a week before.

It reported one more death and claimed the fatality rate for the "fever" was 0.002 percent.

State media reports do not specify how many of the cases and deaths have tested positive for the coronavirus.

Pyongyang has so far not responded to an offer of help from Seoul, according to South Korea's unification ministry.

During his visit to Seoul at the weekend, US President Joe Biden said Washington had also offered Covid-19 vaccines to Pyongyang but "got no response".

Despite the virus outbreak, new satellite imagery has indicated North Korea has resumed construction at a long-dormant nuclear reactor.

The United States and South Korea have both warned that Kim is poised to conduct another nuclear test, which would be the country's seventh.