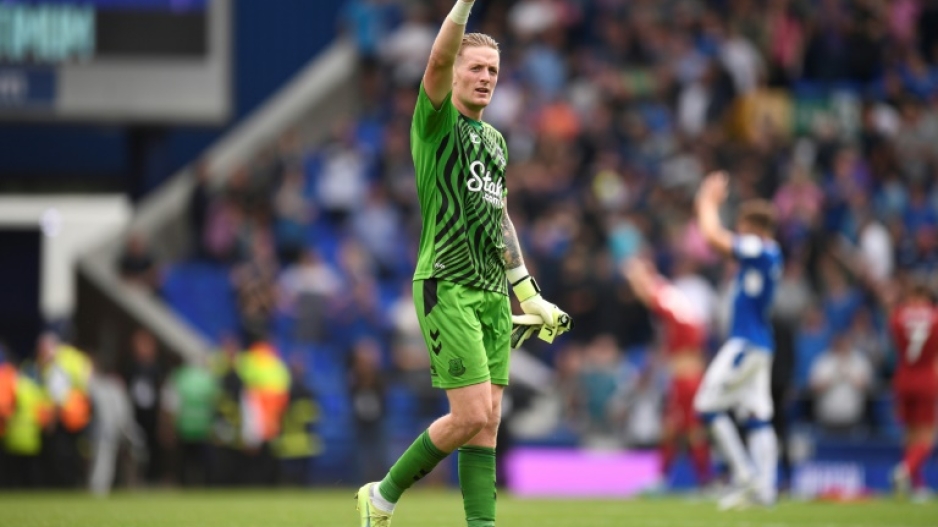 Conor Coady thought he had put Everton ahead with a close-range finish from Neal Maupay's shot in the second half at Goodison Park.

But the former Liverpool defender's goal was correctly disallowed for offside after a VAR check, sparking an angry response from the stands.

A beer bottle appeared to be thrown from behind the managers' technical areas, narrowly missing Liverpool boss Klopp.

As if that wasn't shocking enough, an Everton fan ran on to the pitch from the Gwladys Street End in a bid to confront referee Anthony Taylor before being ushered away by stewards.

Those nasty incidents overshadowed a pulsating clash between these bitter rivals that could easily have finished with goals aplenty but for a man of the match display from Pickford and some fine stops from his Liverpool counterpart Alisson Becker.

"Wow, what can you do? It was a great derby, super intense, with a lot of really spectacular saves," Klopp said.

"We hit the post three times and Pickford made so many saves. I don't know how many derbies I've been in, but it's quite a few and they're always difficult here."

Everton are now without a victory in their first six games this term, while Liverpool's momentum was checked after winning their previous two matches.

"We kept our heads. We played well and we're getting better. It felt like today could have gone either way," Everton boss Frank Lampard said.

"We're not going to go from just staying up to being the team we want to be, we have to go through a process."

Maupay was finally making his red-tape delayed Everton debut after signing from Brighton, but the French striker wasted an early chance when he scuffed wide from Demarai Gray's pass.

Tom Davies had started that attack with a crunching challenge on Fabinho that epitomised the derby maelstrom and left the Liverpool midfielder pole-axed for several moments before he could play on.

As the intensity increased, Luis Diaz had Everton fans baying for blood as the Liverpool winger went unpunished after catching Nathan Patterson with an out-stretched arm.

Liverpool striker Darwin Nunez looked rusty in his return from a three-game suspension, failing to guide his far-post header on target from Trent Alexander-Arnold's cross.

Liverpool's defence has been unusually creaky this season and, when Maupay caused panic inside the penalty area, Davies seized possession and flicked a curling shot onto the far post.

After a subdued start from Nunez, Liverpool's big-money signing from Benfica sparked into life with an agile effort that forced a brilliant tip onto the crossbar by Pickford.

With Everton struggling to regroup, Diaz pounced on the rebound and stroked a curling strike against the post.

Liverpool had found it hard to impose themselves amid a fiery derby played at a typically frenzied tempo.

But Klopp sent on Roberto Firmino at half-time and there was an immediate improvement in Liverpool's approach play.

Nunez's dipping volley tested Pickford from the edge of the area before Firmino's low drive was pushed away for a corner by the Everton keeper.

Pickford was all that stood between Liverpool and the lead as he repelled Firmino's header, then made another superb stop to keep out Fabinho's blast.

Liverpool almost paid for those misses when Gray teed up Maupay six yards from goal, but the striker's poor touch allowed Alisson to get in position to save.

There was still more drama as Alisson made a stunning save as he tipped over Dwight McNeil's deflected shot.

Pickford was in equally defiant mood, turning away Firmino's snap-shot in the final minutes and then pushing Mohamed Salah's shot onto the woodwork in stoppage-time.