Kolbe back, SA at full strength against Japan 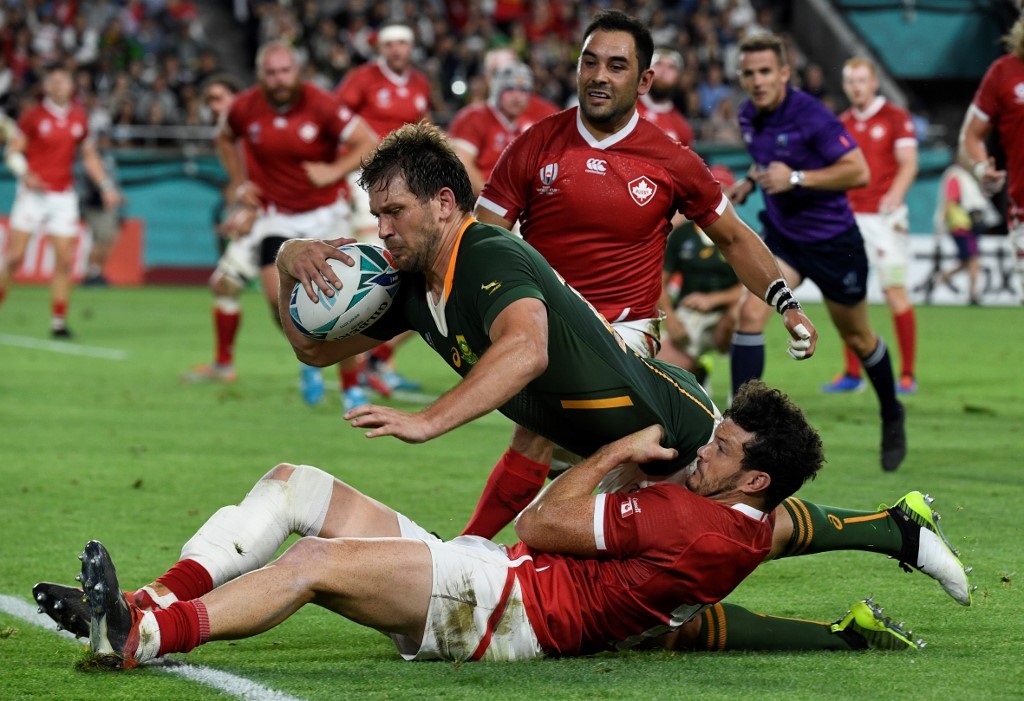 South Africa's centre Frans Steyn (C) dives a scores a try past Canada's centre Ciaran Hearn (down) and Canada's scrum-half Phil Mack (up) during the Japan 2019 Rugby World Cup Pool B match between South Africa and Canada at the Kobe Misaki Stadium in Kobe on October 8, 2019.

TOKYO - Electrifying speedster Cheslin Kolbe was named on the wing as South Africa announced a full-strength team on Thursday for this weekend's Rugby World Cup quarter-final against hosts Japan.

Kolbe returns to the side after an ankle injury as the Springboks bid to avenge their "Miracle of Brighton" defeat to Japan at the 2015 World Cup in Tokyo on Sunday.

Coach Rassie Erasmus named an identical matchday 23 to their 49-3 victory over Italy earlier in the tournament, with a six-two forwards-backs split on the bench -- indicating they will hit Japan with some heavy artillery upfront.

"Obviously if you look at our team selection, we've got a six-two split, which a lot of people think means we are going to be very forward-dominated, which is true in one sense," said Erasmus.

However, he said he also wanted a fresh set of forwards off the bench to counteract Japan's strategy of tiring opposition packs out with their speed.

READ: Boks block out 2015 nightmare as they prepare for Japan

Right-wing Kolbe scored two tries when South Africa spanked Japan 41-7 in a warm-up match last month, when his counterpart on the left, Makazole Mapimpi, stole the show with a hat-trick.

Erasmus has made only three changes from the side that beat Japan in the warm-up game in Kumagaya near Tokyo, with Tendai Mtawarira, Bongi Mbonambi and Lood de Jager coming in for Steven Kitshoff, Malcolm Marx and Franco Mostert.

"Obviously, it wasn't that easy because a lot of guys had put up their hands and played really well but we tried to get some continuity in the team," Erasmus said.

Mtawarira, de Jager and Pieter-Steph du Toit all started the famous game in 2015, when Japan won 34-32 to pull off the greatest shock in World Cup history.

However, Japan is no longer an unknown quantity after they stunned Ireland and Scotland en route to topping Pool A with four wins out of four to reach the quarter-finals for the first time.

Both the Brighton match and the Kumagaya clash are "almost irrelevant" coming into the last-eight clash, said Erasmus.

"The way Japan has improved since that game they played against us there (in Kumagaya), is tremendous. They've beaten Ireland, they've beaten Scotland and they have topped their pool. And they have done it in style," said the coach.

"But we feel we have also improved a lot since we've played that game," he added.

Asked who he thought the favourites were for the match, he said Japan's coach Jamie Joseph would "100 percent" believe the Brave Blossoms were capable of beating the Springboks.

But he was characteristically bullish about his own team's chances.

"If I'm honest with you, I think we are the favourites. I'm not one of those coaches who sits here and says to you 'I'm not really sure', because we prepare to win. That doesn't make it any easier to win," said the coach.

"Both teams will believe they are favourites inside... that's why I think it makes for a great match-up where both sides will have great belief."