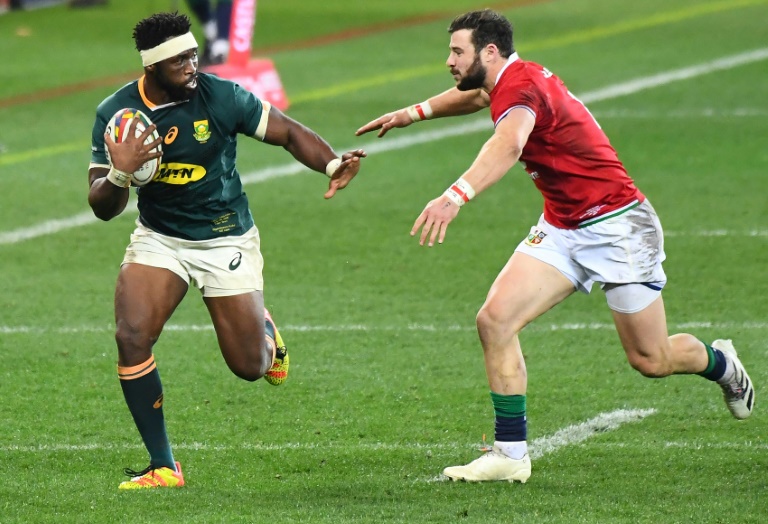 CAPE TOWN - South Africa skipper Siya Kolisi on Friday fanned the flames of a refereeing storm ahead of the second Test against the British and Irish Lions by claiming Australian Nic Berry "disrespected" him last weekend.

Hours before the flanker spoke in an online news conference on the eve of the second international in Cape Town, Rugby Australia said criticism of the first Test referee was "unacceptable".

It shook what had been a quiet build-up to the potentially decisive second Test of three with opinions sharply divided over several refereeing decisions.

Among allegations made by Erasmus was that Berry had shown far more respect for veteran Lions captain and lock Alun Wyn Jones than Kolisi.

Sometimes criticised for being too diplomatic, 2019 Rugby World Cup-winning skipper Kolisi did not hold back on Friday.

"I felt totally disrespected. I did not feel I was given a fair opportunity to express my views.

"Have you watched the (Erasmus) video?," he asked reporters. "Watch the video and then we can speak about it.

"I did not feel I had the same access to the referee (as Jones). Watch the game and you will see for yourself."

Kolisi said he was looking forward to the second Test being handled by New Zealander Ben O'Keeffe, who replaces Berry in a rotation planned before the series, with the Australian now an assistant referee.

"I think Ben will give a fair opportunity for both captains and that is all we are asking," said the loose forward who made history in 2018 by becoming the Springboks' first black Test captain.

Meanwhile, a Rugby Australia statement said they "noted with dismay and concern the public commentary by Rassie Erasmus regarding Australian referee Nic Berry and other match officials.

Rugby Australia chief executive Andy Marinos confirmed they have taken up the issue with World Rugby, who said on Thursday they had noted what Erasmus said and would investigate.

"As a highly regarded and respected international referee, the attack on Nic's integrity, character and reputation is unacceptable," the official said.

"It is important to ensure public attacks of this nature are not tolerated. We will continue to provide support to Nic, as both his physical and mental well-being remains a priority for us."