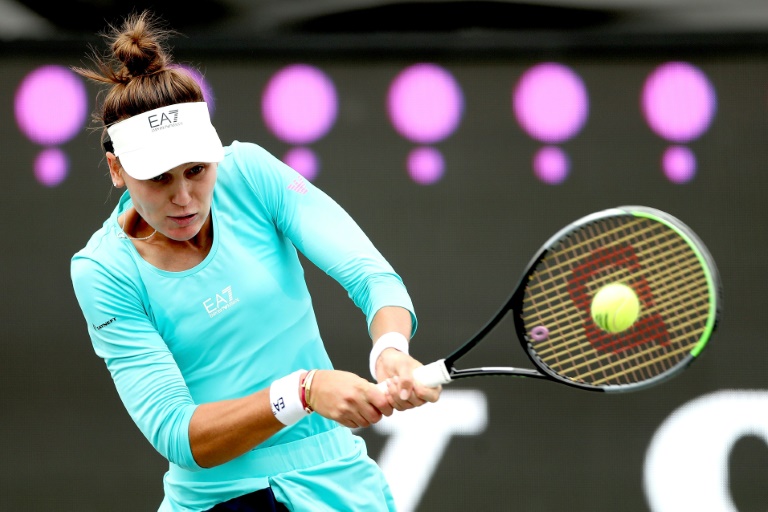 Veronika Kudermetova of Russia on the way to victory over Spain's Paula Badosa in the semi-finals of the WTA clay-court tournament in Charleston. AFP/Matthew Stockman

Kudermetova, the 15th seed from Russia, overcame her nerves to beat Badosa 6-3, 6-3 and reach her second final of the season.

She fell to Aryna Sabalenka in the title match at Abu Dhabi in January.

Montenegro's Kovinic defeated Tunisian Ons Jabeur 6-3, 6-2 to give herself a chance at a first WTA crown.

Spain's Badosa, ranked 71st in the world, had reached the semi-finals with a 6-4, 6-3 upset of world number one Ashleigh Barty of Australia.

It was just the second win of her career over a top-20 player, the first coming in the second round against 12th-ranked Swiss Belinda Bencic.

But Kudermetova, ranked 38th in the world, fired 28 winners -- two more than her 26 unforced errors -- and converted four of her six break chances to beat Badosa -- who was able to take advantage of just one of her five break point opportunities.

"Today, I tried to play more aggressive than I played in Abu Dhabi," said Kudermetova, who needed three sets to get past Badosa in the third round there on the way to the final.

"It was a good match for me because I was really nervous. I showed a lot of emotion -- I crushed my racquet -- but I like this match."

Kudermetova, who hasn't dropped a set this week, closed out the contest with back-to-back aces.

Kovinic, ranked 91st in the world, is in her first final in almost five years and her first at the 500 level.