Lamola: SA using all avenues to get the Guptas to account

Justice Minister, Ronald Lamola, is responding to a US decision to blacklist the Guptas and their associate Salim Essa.

JOHANNESBURG - Justice Minister, Ronald Lamola, says South African authorities are using all avenues available to them to get the Guptas to account.

He was responding to a US decision to blacklist the Guptas and their associate Salim Essa.

READ: US sanctions the Guptas

"Some of the prescripts that the US has used for example is the executive order which we do not have in SA. So hence we have taken the route of investigations and through various commissions of inquiry which is to act. You know they were expected to appear before the commission. We are in the process of help to ensure that they are able to come and respond," said Lamola.

On Thursday, the US Treasury announced sanctions on the Gupta family and associate Salim Essa, calling them a "significant corruption network" that dispersed bribes and misappropriated millions in state funds.

END_OF_DOCUMENT_TOKEN_TO_BE_REPLACED 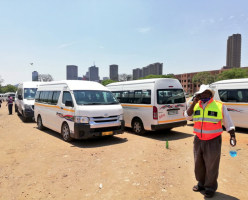