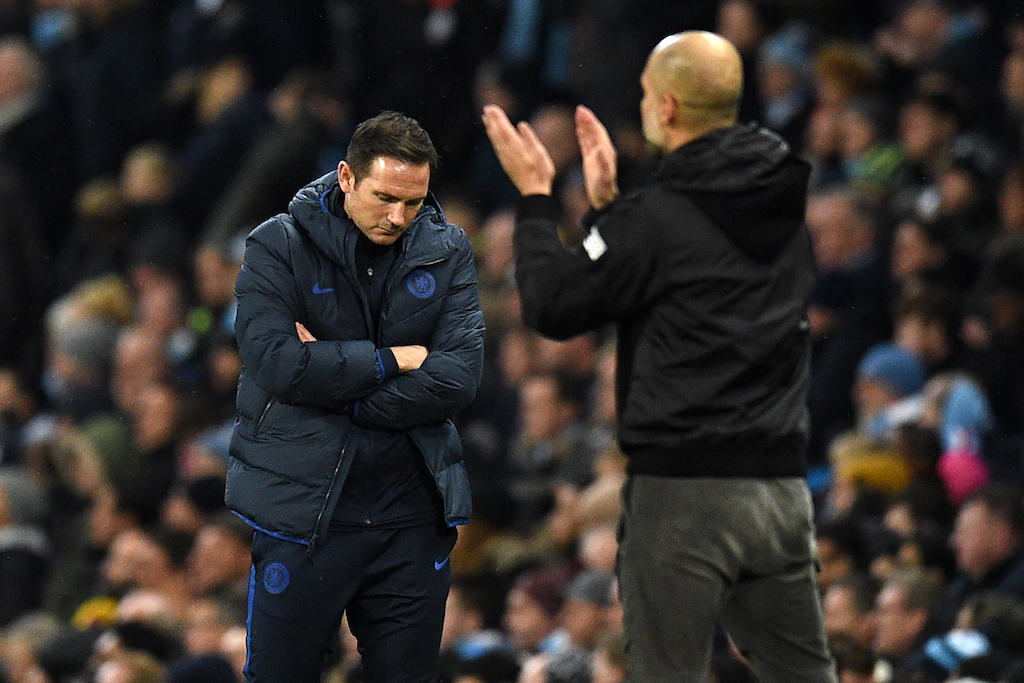 Chelsea head coach Frank Lampard (L) reacts on the touchline during the English Premier League football match between at the Etihad Stadium in Manchester, England, on 23 November 2019.

LONDON - Frank Lampard has set his sights on capping an impressive first season as Chelsea manager by leading the Blues to FA Cup glory against Arsenal on Saturday.

Lampard enjoyed four FA Cup final victories as a Chelsea player, but getting his hands on the first trophy of his nascent managerial career would be an even more significant moment for the 42-year-old.

READ: Liverpool CEO to step down in August

Having led Chelsea into next season's Champions League via a top four finish in the Premier League, Lampard heads to Wembley surfing a wave of positivity.

It is a testament to Lampard's acumen that, in just his second season as a manager, he has Chelsea positioned as an emerging force just 12 months after the club was in turmoil.

When Lampard arrived at Stamford Bridge in June 2019 after one season as boss of second tier Derby, he carried the good wishes of supporters who idolised him during his glittering 13-year spell with the club.

But there were many pundits who doubted whether Lampard was the right man to get Chelsea back on track following the turbulent reign of Maurizio Sarri.

The taciturn Sarri fell out with several of Chelsea's stars, alienating them with his monotonous training regime and inflexible tactics.

Fixing the fractures in Chelsea's dressing room wasn't the only problem facing Lampard, who also had to deal with the club's transfer ban last summer and the sale of Belgium playmaker Eden Hazard to Real Madrid.

Even for an experienced boss, it would have been a daunting situation, but Lampard has risen to the challenge.

"There were a lot of unknowns when I came in, could we move forward without Eden Hazard? We knew we had lost a massive player," Lampard said.

"We've a real spirit within the group now and it's a real team effort now."

With his hands tied by the transfer embargo, Lampard was compelled to give some of the club's youngsters a chance to prove their worth.

That they responded so tenaciously and with such verve was a tribute to Lampard's influence.

A swaggering 5-2 win at Wolves in September served notice that Lampard and his young prodigies wouldn't be out of their depth, while a mature 1-0 Champions League win at Ajax showed they could handle Europe's elite.

Lampard's midas touch hasn't been restricted to the young guns.

He coaxed consistency from Willian and brought Olivier Giroud back into the fold after the French striker had appeared set to leave in January.

Exiled in the first half of the season, Giroud's prolific form since the coronavirus hiatus -- seven goals in 10 matches in all competitions -- played a key role in Chelsea holding onto their top four berth.

"What we've done this season is take the opportunity to bring in the younger players and improve the existing players," Lampard said.

At a club where owner Roman Abramovich dispenses with managers in ruthless fashion, Lampard showed he wasn't intimidated by twice dropping error-prone goalkeeper Kepa Arrizabalaga despite the club's fears it could harm his future transfer value.

Lampard's furious response to perceived antagonism from Liverpool's coaching staff during their recent clash at Anfield was another sign he isn't to be trifled with.

While Chelsea's progress under Lampard has been undeniable, they still lost 12 times in the league for only the second time since Abramovich bought the club in 2003.

Unable to fix Chelsea's defensive frailties and often frustrated by their lack of cutting edge, Lampard has been busy in the transfer market and more new signings are on the way.

He has also been linked with Manchester United keeper Dean Henderson, West Ham's Declan Rice and Bayer Leverkusen's Kai Havertz as he tries to bridge the 33-point gap to Liverpool.

"The challenge now is to see what more we can do next season," Lampard said.