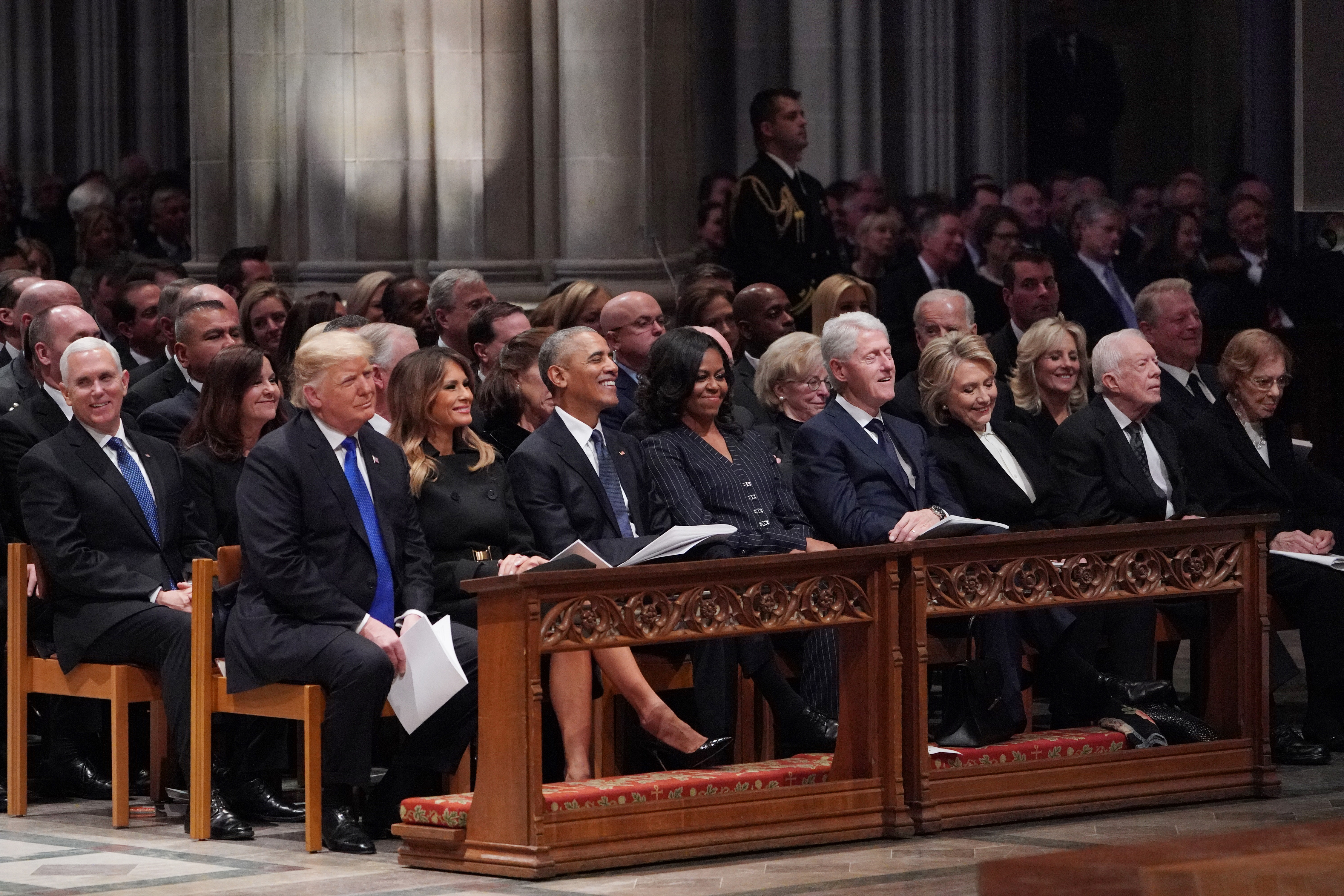 WASHINGTON - International dignitaries gathered with US leaders Wednesday at the funeral service for George HW Bush, a graceful show of unity that allowed Americans to hit pause on the toxic rhetoric that has engulfed Washington and national politics.

The nation's 41st president, who died Friday at age 94, laid in state for two days in the US Capitol rotunda, as President Donald Trump exchanged his usual aggressive posture for one of respect and solemnity.

"Looking forward to being with the Bush family," he tweeted early Wednesday before Bush's remains were transported from the Capitol to Washington National Cathedral.

"This is not a funeral, this is a day of celebration for a great man who has led a long and distinguished life. He will be missed!"

Tens of thousands of Americans quietly filed into the Capitol to pay their respects to a man who steered the nation through turbulent times including the end of the Cold War - and in a style dramatically different from the bombast and combativeness championed by the current commander-in-chief.

In a show of respect, Pennsylvania Avenue was lined with well-wishers as a cortege proceeded toward the cathedral in the first presidential funeral since Gerald Ford died in late 2006.

George W. Bush and wife Laura stood stoically outside the US Capitol as an honor guard carried his father's flag-draped casket to the hearse.

International tributes have poured in for Bush, whose political locus was foreign policy and America's place in the world.

A telegram from the Vatican relayed Pope Francis's "heartfelt condolences" to the Bush family.

Trump's ascendancy to the head of the Republican Party saw him exchange vitriolic attacks with the Bushes, including mocking Bush senior's "thousand points of light" phrase and slamming the presidential son's 2003 invasion of Iraq as "one of the worst decisions in the history of our country."

But he has taken pains to demonstrate unity since Bush's death, and made a low-key visit to the Capitol late Monday with First Lady Melania Trump to salute Bush's casket.

And on the eve of the state funeral, the couple met with George W. Bush and former first lady Laura Bush at the presidential guest residence Blair House.

'Civility and good will'

Many federal offices are closed along with Wall Street stock markets.

Congress also suspended votes - even in the midst of a looming potential shutdown that requires congressional action before midnight Friday.

The passing of Bush, only the second president to see his son follow him to the Oval Office, has led Americans to reflect on his life of duty and service to country as a leader of the so-called "Greatest Generation."

At a time of extraordinary and deep political fissures, Bush was looked to this week as a gracious, humble servant of country who aimed to bridge the divide.

"We can agree or disagree with the policies," Monica Harisson, who worked eight years for the Reagan administration, told AFP.

"But if we respect the human being, I think it's a much broader framework for civility and good will in the country."

Bush was a decorated World War II aviator who nearly lost his life when he was shot down on a bombing mission.

He served as a congressman, envoy to China and ambassador to the United Nations, director of the Central Intelligence Agency, and vice president to Ronald Reagan before winning the White House.

After the Washington service, Bush's casket will be flown back to Houston. The former head of state will lie in repose at St Martin's Episcopal Church, where the Bushes worshipped for decades, until Thursday's funeral.

He will be interred at the George HW Bush Presidential Library Center in College Station, Texas, next to his wife, who died in April, and their daughter Robin who died of