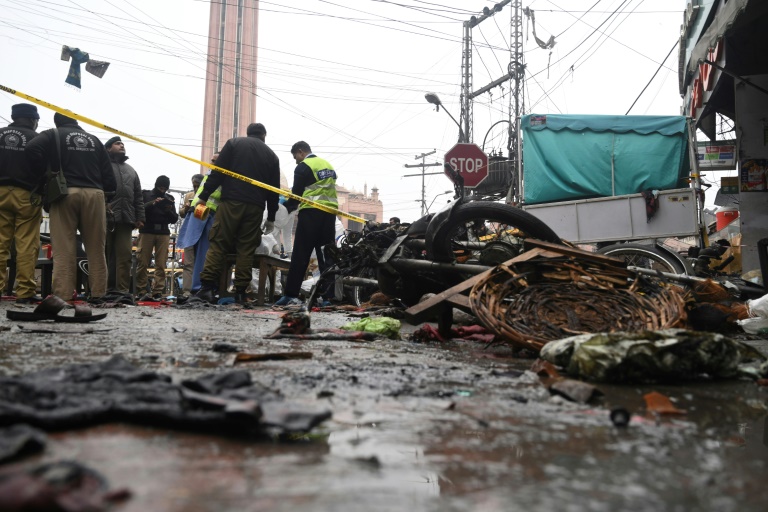 LAHORE - At least two people were killed and 22 wounded Thursday by a bomb blast in a busy shopping district of the Pakistani megacity of Lahore, police and officials said.

The attack was claimed on Twitter by a spokesman for the Baloch Nationalist Army, one of several ethnic separatist groups that have been waging an insurgency for years in southwest Pakistan.

"Initial investigations show that it was a time-controlled device on a motorbike which was the cause of the blast," Rana Arif, spokesman for Lahore police, told AFP.

Officials said a nine-year-old child was one of those killed.

Pakistani Prime Minister Imran Khan expressed regret over the "loss of precious human lives", a spokesman for his office said.

On Twitter, a spokesman for the Baloch Nationalist Army said it was responsible.

"This attack targeted bank employees. A detailed statement will be issued soon," the tweet said.

Mineral-rich Balochistan, bordering Afghanistan and Iran, is the largest of Pakistan's four provinces, but its roughly seven million inhabitants have long complained they do not receive a fair share of its gas and mineral wealth.

China is investing in the area under a $54-billion project known as the China-Pakistan Economic Corridor (CPEC), upgrading infrastructure, power and transport links between its far-western Xinjiang region and Pakistan's Gwadar port.

Baloch separatists previously claimed several attacks on CPEC projects, and thousands of Pakistani security personnel are deployed in the region to counter the violence.

Pakistan has suffered a string of blasts and attacks against police since December, when a truce between the government and Pakistan's Taliban lapsed.

Tehreek-e-Taliban Pakistan (TTP) -- a home-grown movement that shares common roots with the Afghan Taliban -- has claimed responsibility for most recent attacks.

The TTP said earlier this week it was responsible for a deadly shootout in Islamabad on Monday night -- a rare attack by the militants in the heavily guarded capital.

A police officer was killed and two others injured when two TTP gunmen opened fire from a motorbike on a police checkpoint.

Police said both attackers were killed, and Pakistan's interior minister warned afterwards of the potential for further violence.

Pakistan's government announced late last year it had entered a month-long truce with the TTP, facilitated by Afghanistan's Taliban, but that expired on December 9 after peace talks failed to make progress.

The TTP has been blamed for hundreds of suicide bomb attacks and kidnappings across the country, and for a while held sway over vast tracts of the nation's rugged tribal belt, imposing a radical version of Islamic law.

But after the 2014 massacre of nearly 150 children at a Peshawar school, the Pakistan military sent huge numbers of troops into TTP strongholds and crushed the movement, forcing its fighters to retreat to Afghanistan.