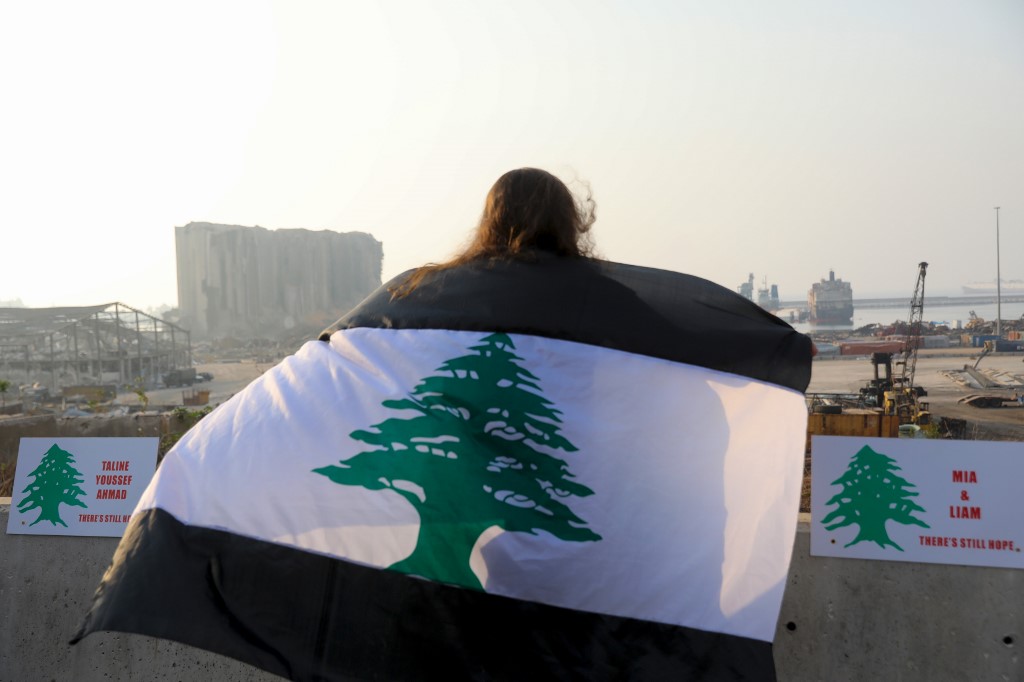 A woman, draped in a black-striped Lebanese flag, looks at the site of the massive explosion at Beirut's port area, during a demonstration to mark one month since the cataclysmic August 4 explosion that killed 191 people, in the Lebanese capital Beirut on September 4, 2020. The explosion piled on new misery for Lebanese already reeling from the coronavirus pandemic and the country's worst economic crisis in decades. As well as killing more than 190 people, the explosion injured at least 6,500 and left 300,000 homeless.

BEIRUT - Lebanon was left reeling Sunday without the slightest prospect of ending multiple crises, after its premier-designate stepped down following the failure of talks to form a government, despite international pressure.

Mustapha Adib's resignation on Saturday ended efforts to hammer out a reformist government in the wake of a colossal 4 August explosion in Beirut that killed 190 people, injured thousands and ravaged large parts of the capital.

Political parties had pledged in early September, during a visit to Lebanon by French President Emmanuel Macron, to form within two weeks a cabinet of independent ministers tasked with ending the country's economic malaise.

"As the efforts to form a government reached their final phase, it became apparent to me that this consensus... was no longer there," Adib said on Saturday.

Under the Lebanese constitution, the president must now hold further talks to nominate another prime minister to form a government, but it is a process that risks dragging out and even failing.

"There was a chance, there was a lot of pressure to form a government and it didn't happen," he said, adding there was a "bigger problem" of geopolitical tensions, especially between the United States and Iran.

Adib's efforts were hampered by the claims of two Shiite formations, the Iran-backed Hezbollah movement, and its ally Amal, led by parliament speaker Nabih Berri, who demanded the finance portfolio.

According to observers, the Shiite allies dug in their heels after recent US sanctions imposed on a minister of the Amal party and two companies affiliated with Hezbollah.

Adib's decision to step aside 26 days after his appointment has left the people of Lebanon feeling as though they are back to square one.

"The page of Mustapha Adib has turned," the French-language L'Orient-Le Jour newspaper declared on Sunday.

It described the return to the drawing board as "a leap into the unknown, even a highway to hell".

Earlier this week, Lebanese President Michel Aoun warned the country was headed to "hell" unless all political parties stepped up and facilitated the formation of a government.

The Arabic-language newspaper Annahar warned of "grave repercussions", and said all eyes were on Macron, who is due to hold a news conference on Sunday evening.

Even before the devastating Beirut port blast, the country was already mired in its worst economic crisis in decades and mass protests that toppled and replaced the government.

Following the 4 August blast, the country's worst peacetime disaster, the government stepped down and Abid was appointed to form a new one.

Many are worried the country is headed from bad to worse.

On the night of Saturday to Sunday, two soldiers and an alleged "terrorist" were killed in the latest episode of a weeks-long manhunt over a murder last month.

The country's novel coronavirus infection figures are also on the rise, with more than 35,000 cases recorded since February, including 340 deaths.

The UN envoy to Lebanon, Jan Kubis, on Saturday reacted with disbelief: "Such a degree of irresponsibility when the fate of Lebanon and its people is at stake!"

"Politicians, have you really scuppered this unique chance created by France?"

Analyst Karim Bitar said Lebanon was expected to have a rough patch ahead.

"Even if Lebanon is not hell-bound, we will probably witness... the weakening of public institutions, a worsening of the economic crisis... and a wave of emigration," he said.