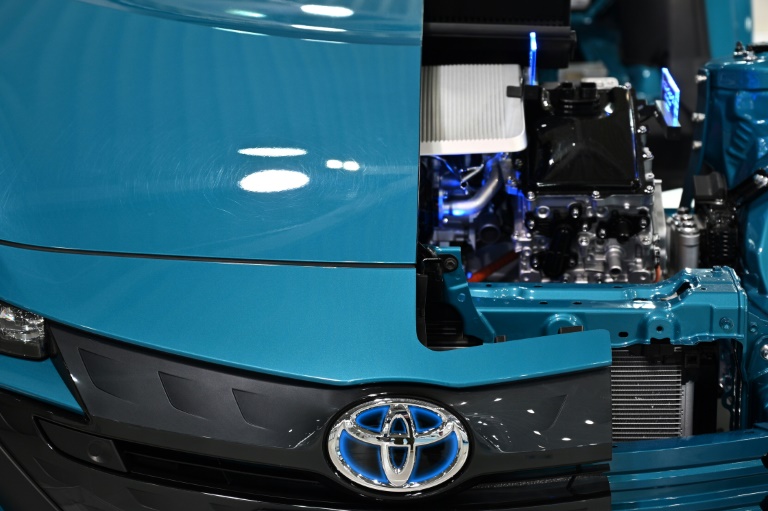 File: Most of Toyota's suppliers, including chipmakers, are Japanese companies. AFP/File | Philip FONG

TOKYO - The global microchip shortage dragging on the auto industry has put barely a dent in production at Toyota, the world's biggest automaker, thanks to lessons it learned after Japan's 2011 tsunami disaster.

While the latest crisis caused by skyrocketing demand for semiconductors has forced global carmakers to revise production plans, Toyota exceeded its sales targets this year and expects to sell even more units in the next 12 months.

Its success lies in part, experts say, in its decision to prepare extensively for disruptions after the experience of Japan's devastating earthquake, tsunami and nuclear crisis 10 years ago.

The catastrophe left parts of Japan's industry on its knees for months, especially vehicle makers, whose domestic supply chains were thrown into turmoil.

Toyota suffered like its rivals and took six months to return to normal production, but the firm resolved not to let the same thing happen again.

"Toyota learned the lessons of the 2011 earthquake probably better than anybody," said Christopher Richter, an auto expert and managing director at the brokerage CLSA.

The Japanese giant reviewed all its suppliers, even the most indirect, giving it a better understanding of its supply chain and allowing it to react quicker in times of crisis.

Faced with a global semiconductor shortage this year, "they were just way better prepared than any other automaker in the world", Richter told AFP.

A source close to another Japanese carmaker agreed.

"We all took steps like that post-Fukushima, but Toyota did it best and kept it up," he said, referring to the nuclear plant that was crippled by the tsunami.

The global auto industry has faced serious headwinds during the pandemic, with lockdowns fuelling declining sales, and a shortage of the chips used in modern vehicles has only compounded the woes.

A surge in demand for home electronics that use semiconductors, as well as a US cold snap, a drought in Taiwan and a fire at Japan's Renesas manufacturer have created a perfect storm throttling chip supplies.

Toyota was a pioneer of the widely used "just-in-time" production model -- where stockpiling is kept to a minimum to reduce costs.

But as soon as it spotted the first signs of a chip shortage, the firm switched things up.

"Toyota was the first automaker to adjust its supply chain management system from a purely 'just-in-time' model to a hybrid model where it stockpiles more of the critical components such as semiconductors," said Joshua Cobb, an auto analyst at Fitch Solutions.

"Toyota has always been a leader in developing supply chain management systems, and other automakers tend to follow Toyota's lead," Cobb said.

German auto giants Volkswagen, BMW and Daimler, and their US rival General Motors have all recently announced that they will change their supply and stockpiling systems to build up more reserves.

But Japanese firm had a head start, and another crucial advantage: most of its suppliers, including chipmakers, are Japanese companies, which will "prioritise supplying Toyota", Cobb said.

Toyota often holds shares and sometimes controlling stakes in these firms, so it has "greater control" over the situation, he added.

"This differs from other automakers, specifically European and American automakers which source most of their components from Asian companies," Cobb told AFP.

An industry source said Toyota also prioritises good relations with suppliers, ensuring consistently solid sales and pledging not to renegotiate fees after a contract has been signed.

All these factors mean Toyota often comes out on top.

"If we receive orders from several clients at the same time, we have to prioritise the most powerful and stable," said the source.

Announcing its earnings Wednesday, Toyota could point to the fruits of its preparations, surpassing its sales target with 9.9 million vehicles sold by all its brands in the financial year to March.