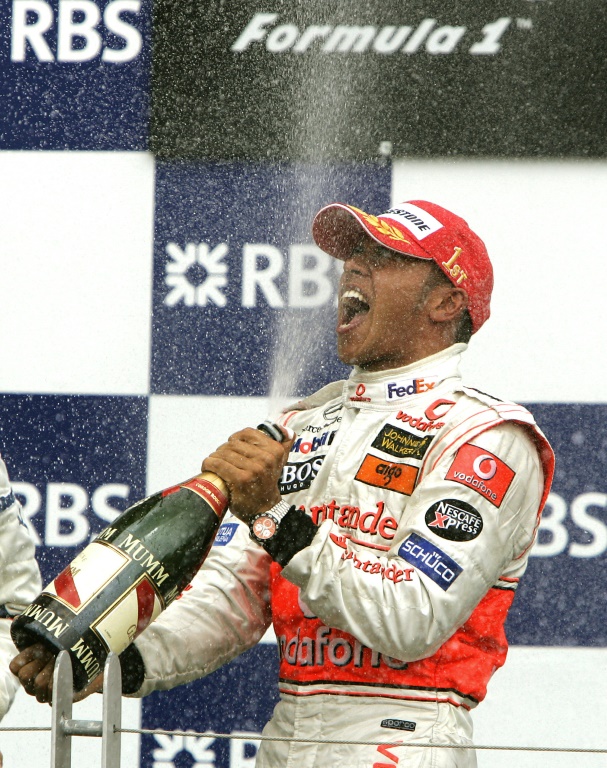 First taste of victory: Lewis Hamilton ceebrating in Montreal in 2007

LONDON - Lewis Hamilton can hit a century of victories on Sunday at the Hungarian Grand Prix.

So far, his 99 wins offer many examples of Hamilton's skill, determination and courage and from them AFP Sport has chosen six of the very best.

The then 22-year-old Hamilton set a record with podium places in his first nine Formula one races.

He started with a third and then four-second places.

In  Montreal, Hamilton beat McLaren team-mate and reigning champion Fernando Alonso to pole and then controlled a race disrupted by four safety car interruptions to win. 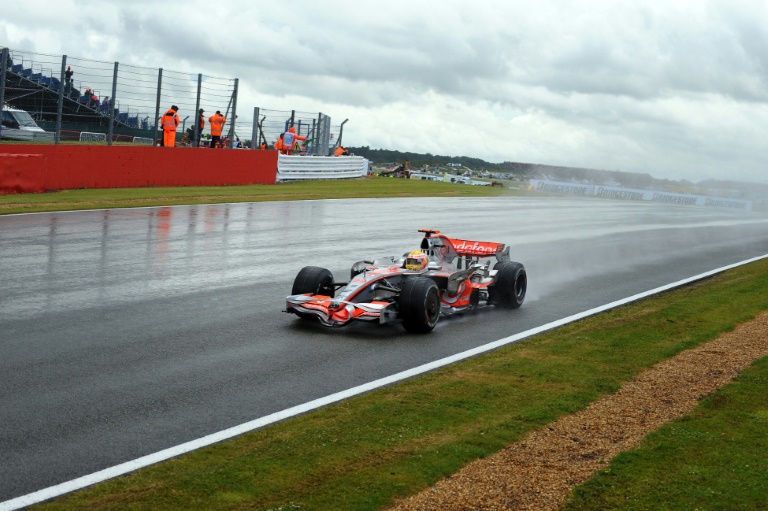 Rain king: Lewis Hamilton cruised to victory through the Silverstone puddles in 2008

It was a breakthrough in more than one sense as Hamilton became Formula One's first Black winner.

"This is history," he said after the race.

Hamilton re-ignited his charge for his first drivers' title with a dominating drive in the wet at Silverstone.

Hamilton started fourth on the grid, splashed through to second by the first corner and took first from team-mate Heikki Kovalainen on lap five.

As Hamilton pulled away, McLaren asked him to slow down.

"If I go any slower, I'll lose concentration," he replied.

He won by 1min 8.6sec after lapping everyone except second-place Nick Heidfeld and Kimi Raikkonen.

"It was so extreme out there," Hamilton said after the race, calling it his "best ever drive".

Mercedes were dominant in 2014 but Hamilton was slower than his team-mate Nico Rosberg.

The German arrived in Bahrain leading the championship. He qualified on pole and even set the fastest lap time in the race yet Hamilton won. 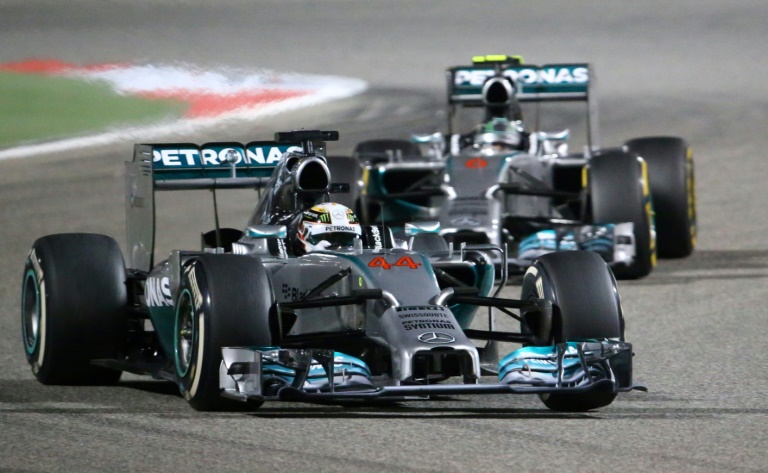 Hamilton slipped past in the run to the first corner and then defended his lead for 57 laps.

Hamilton pulled away but a safety car allowed Rosberg to cut the gap and launch a late assault.

Time and again, Rosberg drew level, but Hamilton judged his line perfectly to protect his lead.

"It felt like one of the best-calculated races I've ever had - how I was using my power and how I was positioning my car," said Hamilton.

Rosberg wasn't so happy with some of Hamilton's driving, fuelling a feud which detonated at the Hungarian and Belgian Grand Prix, after which Hamilton won five straight to take the title.

Hamilton's only win from lower than 10th on the grid was marked by one of his odder brushes with the rules.

Despite qualifying only 14th, he was up to fifth by lap 14.

Then it began to rain.

"I knew there was the possibility to win when it started to rain," said Hamilton.

Suddenly he was three seconds a lap faster than anyone else.

When race and championship leader Sebastian Vettel slid out, bringing out the safety car, Mercedes called their drivers in. 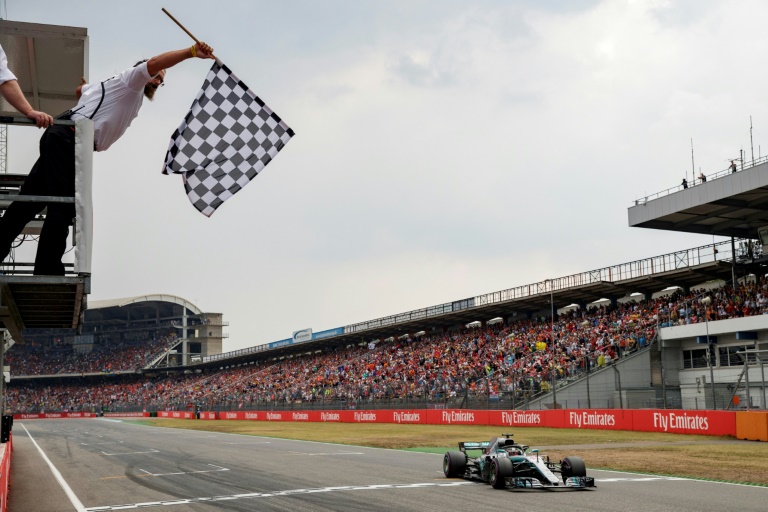 On the charge: Lewis Hamilton took the German GP after a brilliant drive in the rain after qualifying 14th

But they made a mess of the first tyre change. With Valtteri Bottas stuck in the pit, Hamilton heard "Stay out!" over the radio as he entered the lane. Hamilton swerved across the grass and back on to the track, a manoeuvre that put him in the lead when racing restarted.

It earned him only a reprimand from stewards to the fury of rivals.

Hamilton desperately wanted to win at Monaco for his mentor Niki Lauda who had died six days before the race. 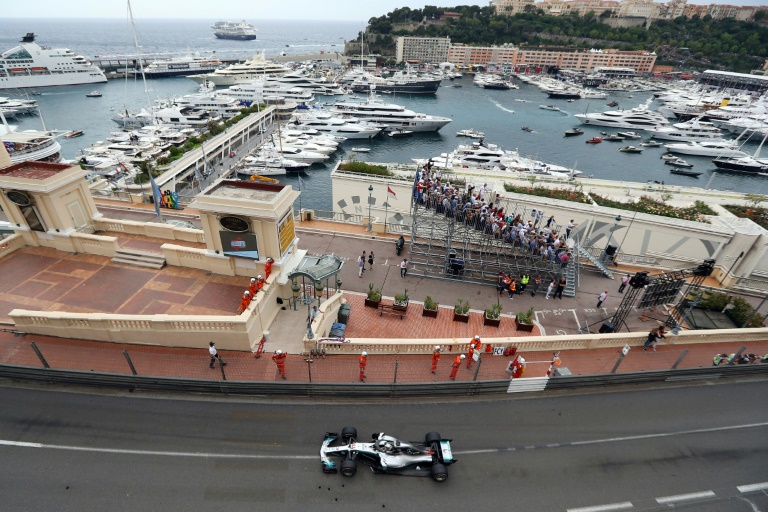 Against the odds: Hamilton won on ruined tyres at Monaco in 2019

His task was made much harder when a bad Mercedes decision at an early pit stop left Hamilton defending the lead from Max Verstappen for 64 laps on slower tyres.

With two laps to go and Hamilton complaining that his tyres had gone, Verstappen tried to pass on the chicane. Hamilton refused to yield and deftly positioned his car to minimise the inevitable collision. He held on to win by 2.6sec.

"That was the hardest race I think I've had," said Hamilton. "I was fighting with the spirit of Niki."

The victory that took him within one of the century and revived a flagging season had all the Hamilton elements: astute tactics, accomplished driving, an aggressive determination to remain the alpha dog and furious accusations from rivals. 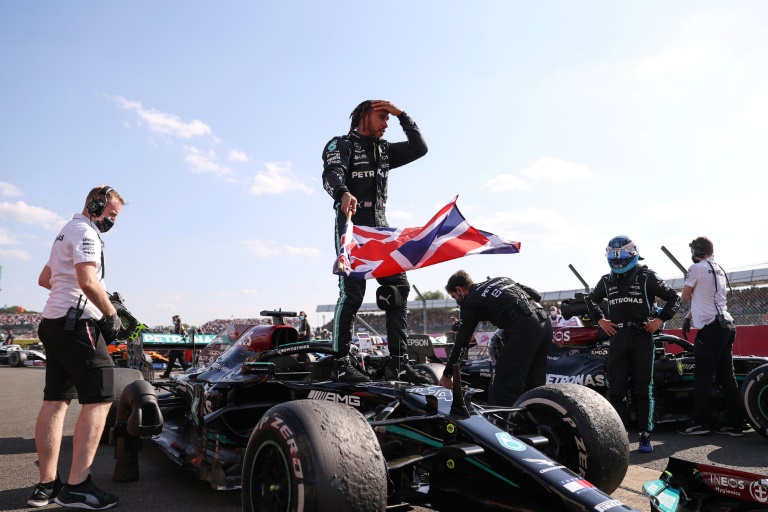 Flying the flag: Hamilton hit 99 with an eighth home victory

Hamilton entered the race losing ground in the championship to the faster Red Bulls. He ended it back in the title hunt.

On the opening lap, Hamilton, determined not to let Verstappen escape, charged through on the inside. The Dutchman shut the door, hit Hamilton and careened out of the race.

Hamilton served a 10-second penalty, then hunted down Charles Leclerc to grab an eighth home victory before his adoring home fans.