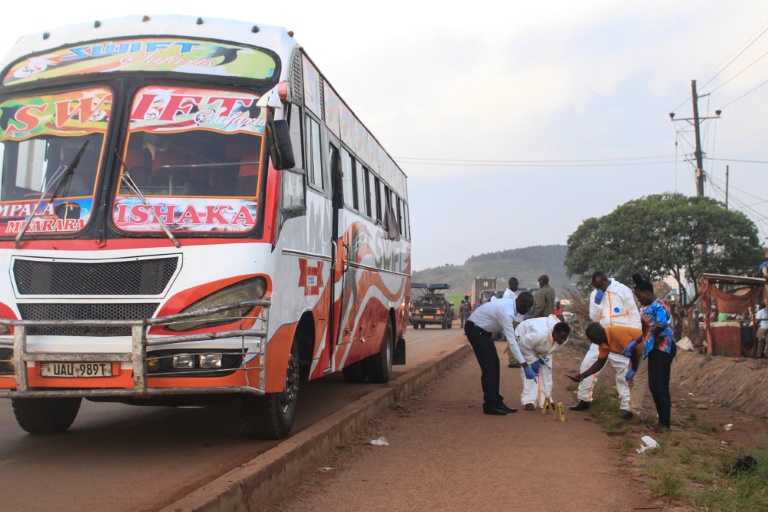 Police investigators at the crime scene. The blast injured several people and killed the bomber. AFP

The attack that wounded several people appears connected to another bombing on Saturday in Kampala that killed one person, police added.

Monday's blast in Lungala was a "suicide bomb attack, where the attacker died in the explosion," police spokesman Fred Enanga said.

The 23-year-old assailant who wore a suicide vest and belt was "on the wanted list of members" of the Allied Democratic Forces (ADF), he added.

The ADF, historically a Ugandan rebel group, has been accused of killing thousands of civilians in eastern Democratic Republic of Congo (DRC). In March the United States officially linked the ADF to the Islamic State group.

Enanga said police had established "a high connectivity" between Monday's attack and a bombing at a roadside eatery in Kampala on Saturday evening that killed a 20-year-old woman and injured three others.

"There are individuals or groups of individuals preparing these IEDs who (belong to) the same group of attackers," Enanga said, referring to improvised explosive devices.

Enanga said police had arrested a number of ADF operatives in the country, who were suspected of hatching "a plot to carry out a major incident on major installations".

"We strongly believe the attackers are part of the sleeper cells in the country, inspired by ADF in close collaboration with the Islamic State," Enanga said in a statement following a press conference.

Police were also pursuing a man believed to be the bomber's accomplice, he added.

Survivors described scenes of chaos and panic following the explosion, with passengers screaming and trying to jump off the bus even before it had ground to a halt.

Uganda's President Yoweri Museveni tweeted on Tuesday that the suicide bomber was part of the same group responsible for a foiled attack on the state funeral in August of army commander Paul Lokech.

Lokech, who was nicknamed the "Lion of Mogadishu", had led a major African Union offensive against Al-Shabaab militants in Somalia.