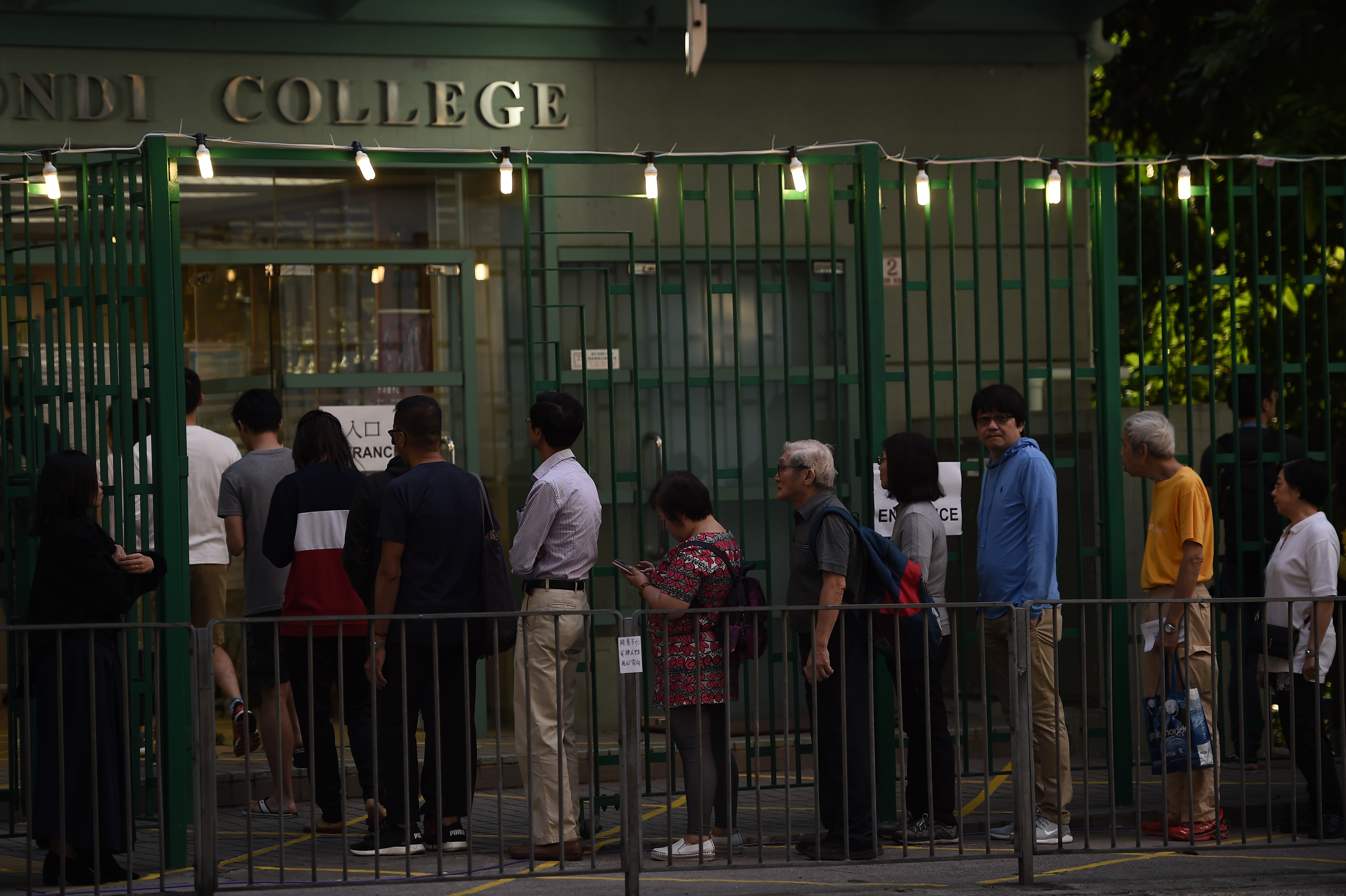 People enter a polling station to cast their vote in the Mid-Levels district of Hong Kong on November 24, 2019. Hong Kong voted in district council elections Sunday in a ballot the city's pro-democracy movement hoped would send a message to the Beijing-backed government.

HONG KONG, China - Hong Kong voters turned out in high numbers on Sunday for district council elections that the city's pro-democracy movement hopes will add pressure on the Beijing-backed government to hear their demands.

Hong Kong has been buffeted by months of mass rallies and violent clashes pitting police against protesters agitating for greater democracy in the Chinese territory.

The poll to choose 452 councillors handling community-level concerns like bus routes and garbage collection has traditionally generated little excitement, but takes on new importance with this year's unrest.

The councils have long been dominated by the city's pro-Beijing bloc, and voters seeking change said they hope that weakening the establishment's grip will give fresh momentum to the democracy movement.

"I hope this ballot can increase our voice in the council," 19-year-old student Michael Ng, voting for the first time in his life, told AFP.

"Even though one ballot can only help a little, I still hope it can bring change to society and support street protests in some way."

Long queues formed at polling stations and the government said turnout in the first two hours was triple the rate seen during the previous district council polls in 2015.

A record 4.13 million citizens have registered to vote -- more than half the population of 7.3 million and an increase of nearly 400,000 -- in polls that are the closest that Hong Kongers get to direct representation.

Some political analysts say high turnout could help the pro-democracy camp, which is calling the polls a referendum on Chief Executive Carrie Lam and the pro-Beijing government, who have refused to concede to their movement's demands.

But the polls are not entirely symbolic: some candidates for next year's legislative elections will be drawn from district councillors, and the councils also will contribute 117 members to the 1,200-strong Beijing-controlled electoral college that chooses the chief executive.

Protests have been muted in recent days after pro-democracy figures urged citizens to avoid disruption so as not to prompt the government to delay the polls.

Police were deployed at some polling stations and on city streets, but the presence was not particularly heavy.

No violence or other disturbances were reported in early polling.

"Facing the extremely challenging situation, I am pleased to say... we have a relatively calm and peaceful environment for (the) election today," Lam said after voting in her constituency on Hong Kong island.

The political unrest kicked into high gear with giant rallies in June against a bill backed by Lam that would allow extraditions to China's opaque justice system.

The bill was eventually withdrawn, but the movement snowballed into wider calls for democracy and investigations into alleged police brutality against demonstrators.

The district polls remain the city's freest. By contrast, members of the city's legislature are elected by a mix of popular vote and industry groups stacked with Beijing loyalists.

Analysts expect pro-democracy candidates to see gains in the district councils but still fall well short of a majority of the 452 seats.

Political bitterness has infected the campaign, with one pro-democracy candidate having his ear bitten off in an attack, while 17 other candidates of all stripes -- some seeking re-election -- have been arrested over protest-related activities.