Looters leave stripped shelves and the question: 'Why?' 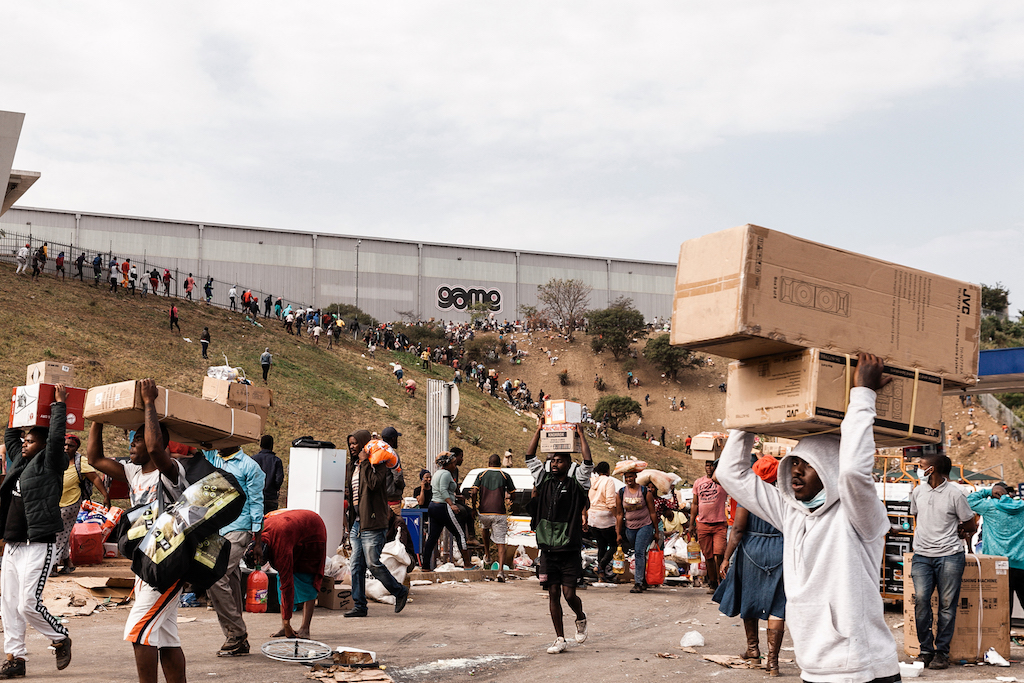 Suspected looters carry goods from the Game Warehouse in Durban on July 13, 2021.

No one paid it any attention: there was nothing left to loot.

A mob had casually stripped the popular store bare, leaving nothing but broken mannequins, hangers and empty shoe boxes, strewn across the floor among debris and rocks.

At a children's store next door, the only item left was a clothing poster. At a laundry, there was just an old sign that read: "No cheques. No credit. No cash refund." Nearby, a cash machine had been ripped from the wall and lay open without a bank note in sight.

Diepkloof Square mall in Soweto is just one of many shopping centres, factories and warehouses around Johannesburg and KwaZulu-Natal that have been ransacked.

The violence and looting started on Friday, a day after former president Jacob Zuma started serving a 15-month jail term for contempt of the country's highest court.

At the nearby Meadowlands mall, where 10 people died on Monday during a looting stampede, a metal shutter was sprayed with the words "Free Zuma."

But the sign may have had very little connection with the pillaging itself.

Several looters who spoke to AFP said they had got caught up in the rush to grab consumer goods for free, or the chance to ease a life blighted by poverty - and no-one was around to stop them.

"I'm really not concerned about Zuma. He is a corrupt old man that deserves to be in jail," said 30-year-old man who works at a car wash.

He admitted to "taking things from the shop for my mum" -- stainless-steel pots, meat and groceries.

"The Zulus in KZN can fight for him (Zuma) - for us, it's about poverty and unemployment," he said, taking a nervous glance for any security patrols in the streets.

"We went to take things when we saw that others were vandalising and nothing was being done to (stop) them," said Karabo Mokone, a 24-year-old woman.

READ: Violence in SA: Is a third force at play?

She said she just took what she could find in the commotion and would sell what she did not use -- "and make some money, because I am unemployed, as you can see," pointing at her old jeans and wornout sneakers.

Standing across the road from the mall, she watched soldiers moving into a parking lot, and munched on sweets and potato crisps she had looted from a shop.

President Cyril Ramaphosa, in a nationwide speech on Monday, lashed the looters and said he was sending in troops to "restore order."

But, for 20-year-old George Litle, "the president must understand we are hungry -- we go to school but we don't have jobs".

Thandie Johnson broke down, sobbing uncontrollably, after she saw what was left of her party accessories shop at the Diepkloof mall.

"Why? Why? Can somebody tell me why?" she asked, walking through the remnants of shelves and empty boxes.

She had put all her savings into the business.

"I've got nothing, no pension money, nothing. So where do I start?"

Godfrey Ratabane's liquor store, a stone's throw away from Diepkloof, had surprisingly been spared despite a ban on booze sales imposed as part of the coronavirus restrictions.

But he was worried that his store could be next on target.

"I'm trying to get the police to help me move my stock from here to my house in Fourways," an up-market suburb of Johannesburg, he said.