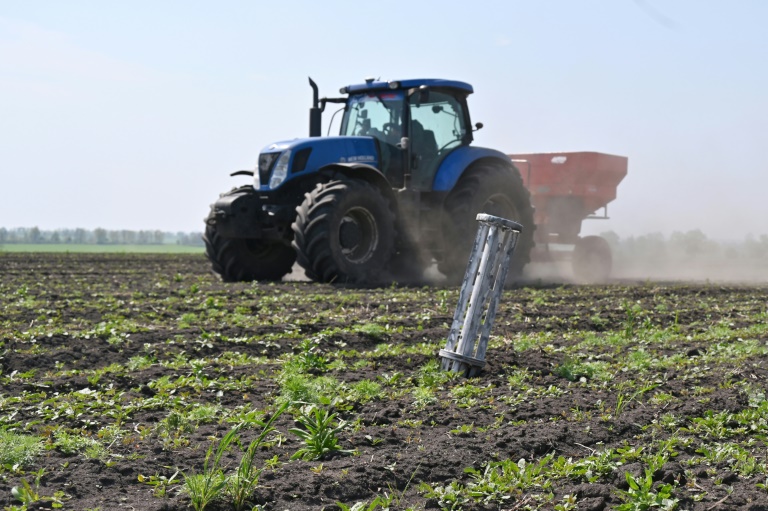 Ukraine farmers, such as this one seen driving past a Russian missile near Kharkiv, have reduced their wheat planting this year. AFP/Sergey Bobok

PARIS - French farmer Robin Lachaux is worried about his wheat. In normal years, it flowers and bulks up in May thanks to regular spring rainfall, but this year hot and dry conditions risk stunting its progress.

"If we don't water it today, we'll lose 50 percent of our output," the young farmer in an orange cap and sweatshirt from Sully-sur-Loire in central France told AFP.

"We wouldn't normally water at this time of the year but the dry periods are coming earlier and earlier," he added as he positioned his pressure hoses and irrigation equipment.

France is Europe's agricultural powerhouse, the biggest grain producer in the 27-country bloc and the world's fourth or fifth biggest wheat exporter.

Its annual production influences global prices which are already at record levels because the war in Ukraine looks set to wipe out a chunk of the country's production, leading to fears of a global hunger crisis.

On Monday, the French agricultural ministry warned about the impact of an unseasonably hot and dry stretch which "will have an impact on cereal production" in France following lower-than-average rainfall over the winter period.

As well as wheat, other crops sown in winter such as barley are in a key development stage in May, while corn and sunflower production over the summer could also be hit.

"Each day that passes, we're seeing the ground cracking more... if it carries on like this, those that can irrigate will be okay, but the others will have dramatic decreases in production."

The French national weather service said the country was in the grip of a hot spell that is "notable for its timing, its duration and its geographical spread", with a 20 percent drop in rainfall between September 2021 and April 2022.

World food prices hit an all-time high in March following Russia's invasion of Ukraine, which accounted for 20 percent of global wheat and maize exports over the past three years, according to the UN's Food and Agriculture Organization. 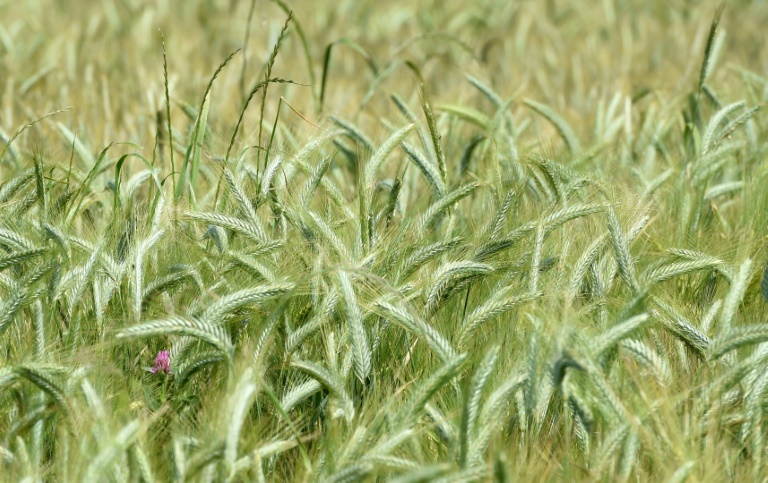 Ukrainian ports are blockaded by Russian naval vessels and French data analysis firm Kayrrosa recently calculated that the area planted with wheat had been reduced by a third this year because of the conflict, according to satellite imagery.

Production could fall by as much as 50 percent this year, according to government and industry forecasts, with some farmers abandoning their fields to join the army.

The strains on global markets have led to warnings from NGOs and the United Nations that hunger or even famine could strike vulnerable import-dependent countries across Africa and the Middle East.

With top wheat-producing states in the United States such as Kansas and Oklahoma also suffering from drought-like conditions, poor French yields could be particularly significant in 2022.

"We already had markets that were very nervous. This is adding to tensions," Nathan Cordier, a grain market analysts at agricultural consultancy Agritel, told AFP. "France is one of the major players in the wheat market and people are counting on it.

"The question is whether export volumes will be enough."

Current wheat prices in Europe are at a record 400 euros a tonne ($420), up from an already high level of around 260 euros a tonne at the start of the year before Russia's invasion of Ukraine.

The high prices are expected to stimulate more planting in the United States and the FAO has forecast that higher yields in Canada and Russia, as well as Pakistan and India could help compensate for below-average harvests in western Europe.

Some of the recent price rises are down to short-term shortages caused by the sudden end to Ukrainian supplies, as well as some farmers holding back from selling their produce in anticipation of higher prices going forward.

"As prices are very high, with wheat at more than 400 euros a tonne for delivery in September, they're waiting," Edward de Saint-Denis, a commodities trader at Plantureux and Associates, a French brokerage.

But as traders and farmers scan the weather forecasts and devise their trading strategies, aid groups warn that lives are at risk in some of the most vulnerable places on earth such as war-wracked Yemen or countries in the arid Sahel region of northern Africa.

"According to our research, food price rises caused by Russia's invasion of Ukraine mean that some local communities in developing countries are already spending more than triple what they were previously paying for food, causing families to skip meals and take their children out of school," Teresa Anderson from ActionAid, a British charity, told AFP.

A prolonged drought in France could make that much worse.

"It would deepen hunger, poverty and debt for low-income families in Africa, Asia and Latin America, making an already desperate situation much worse," she said.

- by Maxime Mamet with Adam Plowright in Paris