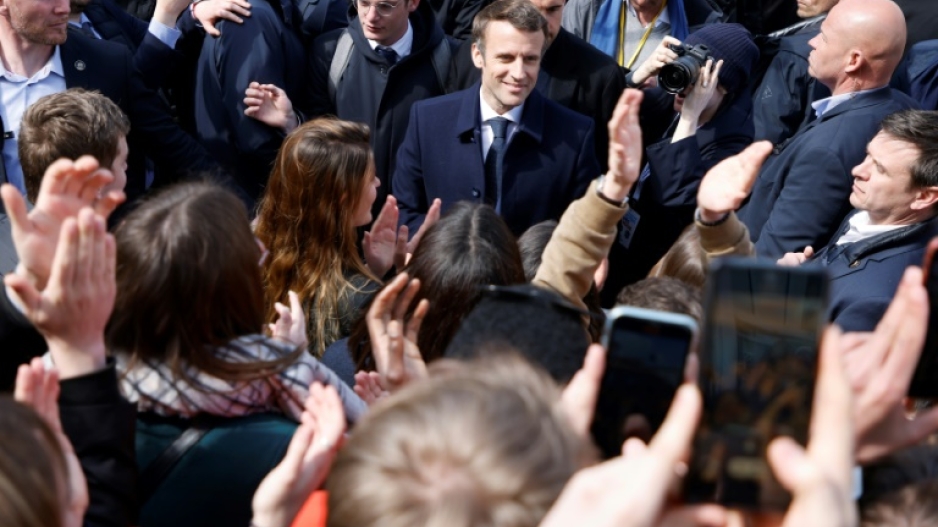 PARIS - President Emmanuel Macron on Thursday launched a bitter attack against far-right leader Marine Le Pen after warning supporters to take nothing for granted in an increasingly tight French election.

Macron is due to address a rally for the first time in his re-election campaign in Paris on Saturday as the clock ticks to the first round of France's presidential polls on 10 April.

The president, who was late entering the campaign as he was sidetracked by Russia's war against Ukraine, for the first time attended a meeting at the headquarters of his Republic on the Move (LREM) party late Wednesday.

"The president-candidate called for a collective mobilisation, based on the idea that nothing is won yet," a source, who took part in the meeting, told AFP.

His attendance, which had not been announced by his team, came after a series of polls showed that Le Pen, the president's main election rival, is catching up on Macron, who has long been the overwhelming favourite to win.

The latest Elabe poll published Wednesday showed Le Pen winning 47.5 percent of the vote in a second-round run-off against Macron, who was projected to garner 52.5 percent, a smaller margin than in the same poll last week.

With a margin of error of up to 3.1 points, those figures suggest Le Pen could theoretically emerge as the winner in the second round.

Analysts say Le Pen has been helped by focusing on basic issues like dwindling purchasing power and also by seeming more moderate in comparison to her fellow far-right candidate, the ex-pundit Eric Zemmour.

Philippe, who has founded his own party but is generally seen as an ally of Macron, added that "if she wins, believe me, things will be seriously different for the country... Her programme is dangerous."

The ex-premier, a heavyweight seen as playing a part in the next government or even as a successor to Macron in 2027, said that the president was "by far" the best candidate standing.

On a campaign visit to the southwestern town of Fouras, Macron insisted that there was no difference between Le Pen and Zemmour. They were both "extreme right," he said.

There is a "duo on the far right and I'm fighting it", Macron said, lamenting the crumbling of the traditional "republican front" against the extremes.

"People have normalised it, looked away, they're saying 'they've got nicer'... so we shouldn't be surprised" to see a strong Le Pen, he added.

Macron's re-election had been seen by many observers as almost a foregone conclusion, as polls suggested Le Pen would again be his rival in the run-off, a repeat of the vote five years ago.

But he formally entered the election campaign only at the last minute, citing his diplomatic efforts to halt Russia's war in Ukraine as the reason for the delay.

Recent days have seen the government on the defensive over liberal use of public money on expensive management consultants such as US-based giant McKinsey.