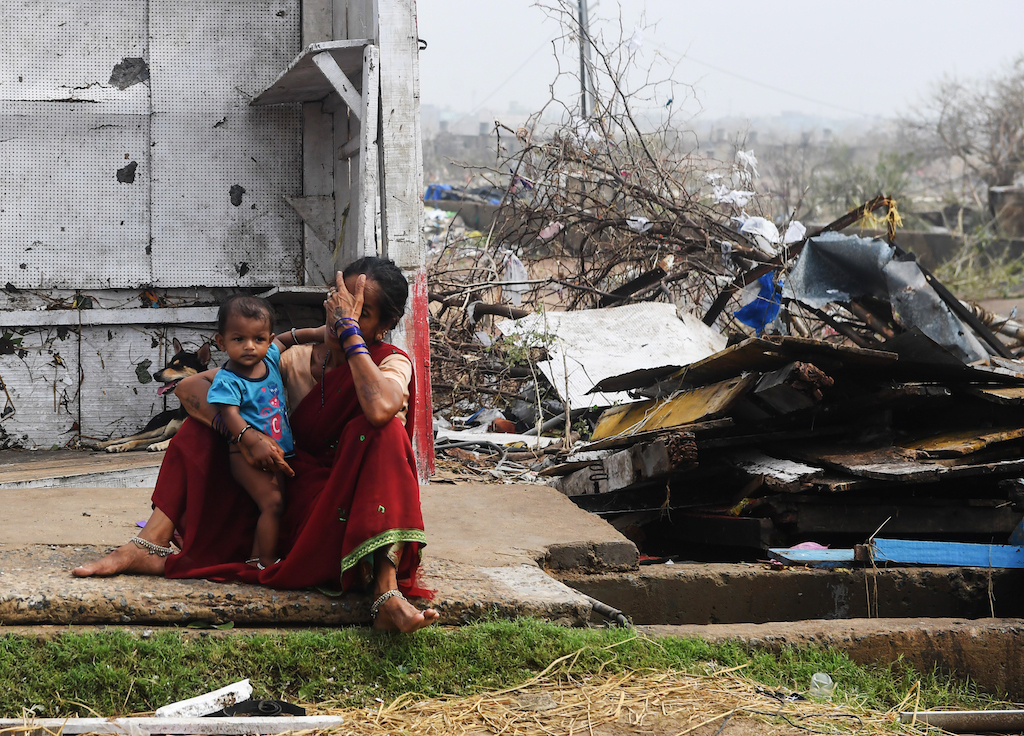 An Indian woman sits with her child next to storm-damaged buildings in Puri after Cyclone Fani swept through the area.

KHULNA - Cyclone Fani weakened to a depression as it barrelled into Bangladesh on Saturday after leaving a trail of deadly destruction in India, although a major human disaster looked to have been averted.

Press reports said 12 people had died in India and police in Bangladesh put the death toll there at the same number -- a fraction of the casualty numbers seen in past cyclones, earning authorities praise from the United Nations.

With 1.2 million evacuated in India's Odisha state, more than 1.6 million people were taken to shelters in Bangladesh, officials told AFP, with at least 36 villages flooded by a storm surge and more than 2,000 homes destroyed.

"Six people died after they were hit by falling trees or collapsed walls, and six have died from lightning," Bangladeshi disaster official Benazir Ahmed told AFP.

Ferries on large rivers remained out of action but those on smaller waterways resumed operations, and many people were beginning to return home with the wind still strong and skies overcast.

India's Meteorological Department posted to Twitter that Fani had weakened to a depression over Bangladesh.

But the storm was still packing a punch, with winds of up to 70 kilometres per hour and heavy rain battering the Indian state of West Bengal, its capital Kolkata and the Sundarbans mangrove forest area overnight and on Saturday morning.

In Kolkata, home to 4.6 million people, 5,000 residents were removed from low-lying areas and old, dilapidated buildings.

Kolkata's airport was meanwhile reopened, as was that of Bhubaneswar, capital of Odisha, the Indian state whose 46 million people are among India's poorest and who bore the brunt of Fani.

Fani made landfall in Odisha on Friday, packing winds gusting up to 200 kilometres an hour, sending coconut trees flying, knocking down power lines and cutting off water and telecommunications.

Twelve people were killed there, the Press Trust of India (PTI) news agency reported, including a teenage boy crushed under a tree and a woman hit by concrete debris.