Manufacturers getting to grips with airless tyres 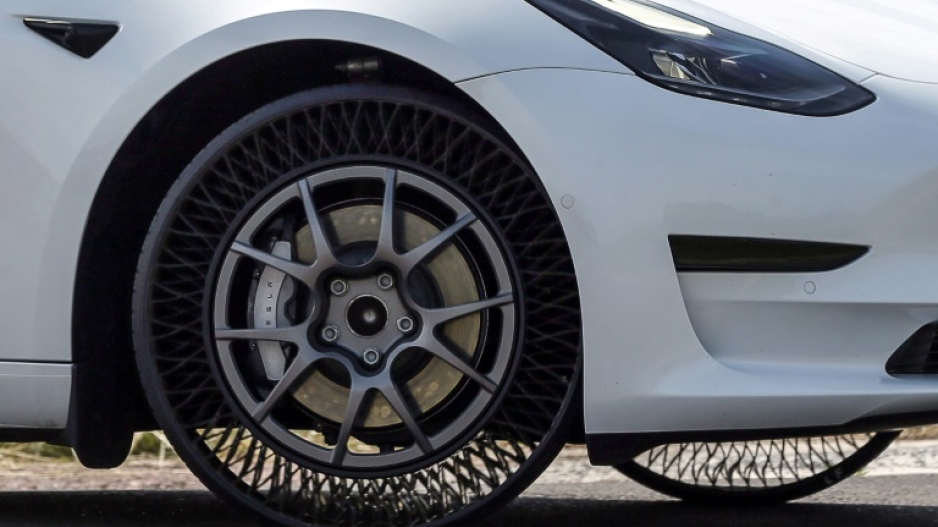 Puncture-proof tyres could one day become a reality

COLMAR-BERG - Airless tyres that never go flat or need to be inflated: It's a decades-long dream that manufacturers hope to turn into a reality soon, but for truck drivers first.

The challenges that the technology faces were put on display at a Goodyear test track in Luxembourg, where a group of journalists put a Tesla equipped with airless tyres through its paces.

Instead of being filled with air, the tyres have a web of spokes that keep the wheels firm and give them a see-through look.

The thin layer of rubber gripping the asphalt has a gargantuan physical challenge to meet: supporting the weight of the car and absorbing shocks as well as standard pneumatic tyres for thousands and thousands of kilometres.

That challenge is being overcome: the tyre's rubber and plastic structure resisted the huge stress as the car banked into the track's tight turns.

The ride is smooth but the grip is not as good as on conventional tyres -- and they are noisier.

The tyres were tested for 120,000 kilometres (75,000 miles) at speeds of up to 160 kph in both scorching temperatures as well as snow, said Michael Rachita, who heads up Goodyear's efforts to develop airless tyres.

"The most obvious advantage is that it's puncture proof," said Rachita.

"It will never run flat, you could drive over any nail and expect not to lose performance," he added.

Rachita said airless tyres will also be maintenance free for drivers as they will never need to check and adjust air pressure.

He said a second generation of airless tyres that are lighter, quieter and roll better are in the works.

Michelin has released the Tweel, but it is for construction vehicles rather than cars where the demands in terms of driving performance are much greater.

The French firm has also unveiled the Uptis which it is developing with US car manufacturer General Motors, and which it hopes can make the jump from auto shows to showrooms next year. 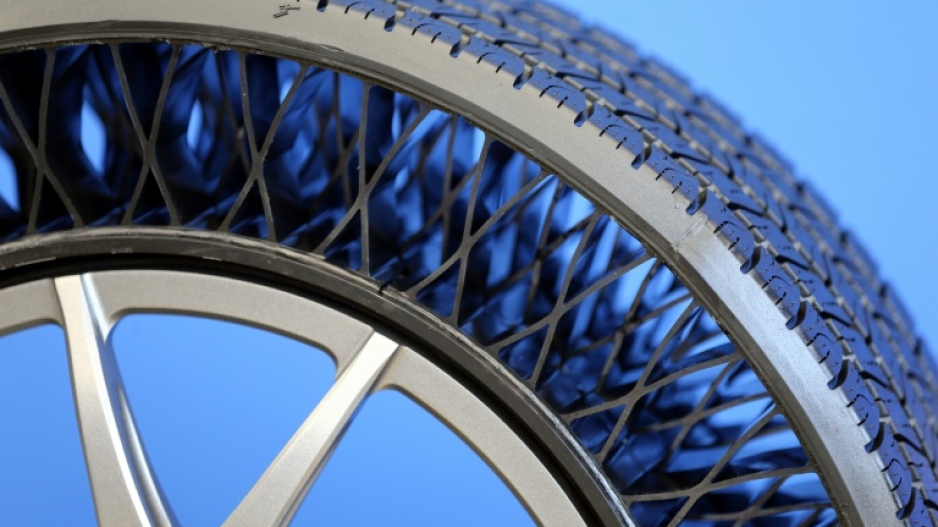 The challenges that the technology faces were put on display at a Goodyear test track in Luxembourg, where a group of journalists put a Tesla equipped with airless tyres through the paces

Its researchers are working on a cocktail of fibreglass and resin to hold the rubber onto the honeycomb structure of the new tyre.

"We're going continue to have air tyres for several decades," he said.

Goodyear, which submitted its first patent on airless tyre technology in 1982, has recently put its food down on the accelerator in terms of research and development.

The US firm aims to have a maintenance-free and long-lasting airless tyre for cars by the end of the decade.

It already has an early version for shuttle buses and automated delivery vehicles on university campuses.

Bridgestone also hopes to have an airless tyre ready within a decade, having already tested early versions on utility vehicles.

Other manufacturers are more sceptical that airless tyres will ever offer comparable shock absorption as traditional tyres and the noise can be reduced sufficiently.

"They aren't a viable solution and I don't expect they will become one," a Continental researcher, Gerrit Bolz, said at a tyre convention in 2017.

But independent researcher Ulf Sandberg at the Swedish National Road and Transport Research Institute, which is working on an airless tyre for trucks, believes they will eventually become a viable alternative.

"I believe that sooner or later airless tyres could take over," he told AFP.

"If rolling resistance is reduced by 50 percent, it would increase the range of vehicles by 25 percent, and could be extremely valuable" for car manufacturers, particularly for electric vehicles where range is a key concern.

Airless tyres could prove to be environmentally beneficial as they could last the entire lifetime of most vehicles and could then be recycled or retreaded for a second life.

But manufacturers may not be burning rubber to bring airless tyres to market because they also pose threats to their business model, said Sandberg.

A switch to airless tyres would strand the manufacturing equipment used for pneumatic tyres, a heavy cost for the companies to bear.

Given the longevity of the airless tyres, companies would be making less of them.

Yet the possibility of gaining a lead on competitors or being left behind by an affordable and high-performing airless tyre for the consumer market keeps their research rolling forward.