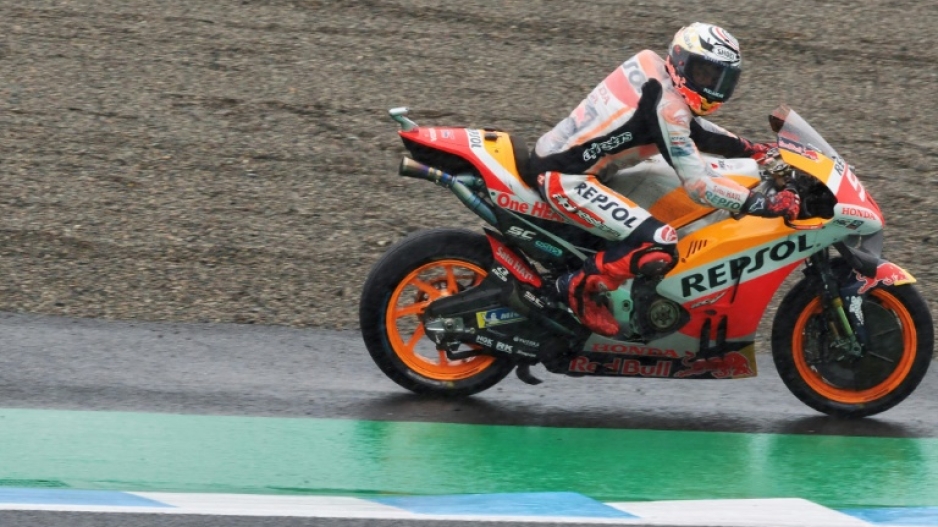 Marc Marquez in action at Motegi in the wet

On a badly disrupted day of heavy rain and lightning at Motegi, the world title contenders struggled to master the conditions.

Spanish great Marquez had no such trouble however on his Honda with his leading time of one minute and 55.214 seconds, ahead of France's Johann Zarco, 0.208 seconds behind, and South Africa's Brad Binder (0.323sec).

The weather is forecast to be considerably better for race day on Sunday, for Japan's first MotoGP since 2019 because of the pandemic.

The 29-year-old Marquez, who was also fastest in a wet second practice, last took pole more than 1,000 days ago, again in Japan.

This was his 63rd MotoGP pole and comes with him only recently back from yet another bad injury.

"Really happy to be on pole today," he said, adding it was "really important for me... to achieve this small target".

But he cautioned: "Tomorrow in the dry will be a different race and different story."

Of the trio of title challengers, Spain's Aleix Espargaro was best-placed at sixth on the grid for Aprilia, with reigning world champion Fabio Quartararo ninth on his Yamaha.

Francesco Bagnaia, who has closed Quartararo's championship lead to 10 points with five races left in the season, was a disappointing 12th on his Ducati.

There are just 17 points separating the top three in the title race but prior to this all the momentum had been with the Italian.

Enea Bastianini is also mathematically still in it but he will start the race way down the grid after crashing his Ducati on Friday and in qualifying, dealing a potential fatal blow to his remote championship hopes.