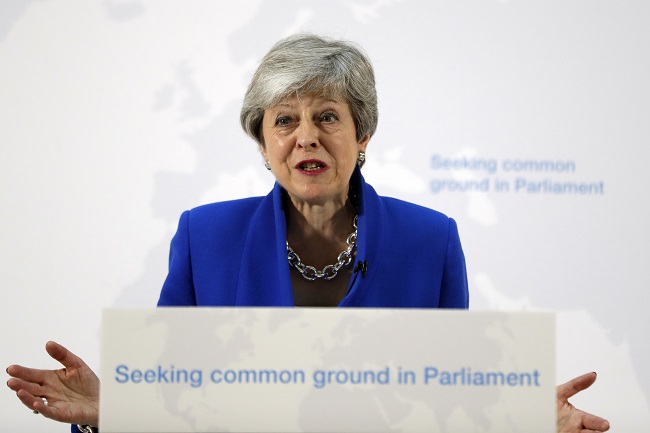 Britain's Prime Minister Theresa May delivers a speech in central London on May 21, 2019.

May is likely to face an intense session at Prime Minister's Questions in parliament on Wednesday, a day before Britain votes in EU elections it had not expected to take part in three years after the Brexit referendum.

The embattled leader promised to give lawmakers a vote on holding a second Brexit referendum and dangled a package of sweeteners she hoped could resolve the Brexit crisis.

May has already said she will leave office shortly after the measures she outlined are put up for a vote early next month -- no matter the outcome.

In her televised address on Tuesday, she promised to give lawmakers a chance to set a confirmatory referendum on whatever version of Brexit they end up approving in the weeks or months to come.

"I recognise the genuine and sincere strength of feeling across the house on this important issue," May said.

The measure is a key demand of the main opposition Labour Party but is bitterly opposed by Brexit-supporting Conservatives whose votes May also needs if she is to get her deal passed.

May said her proposals were this parliament's "last chance" to end the political deadlock that has already delayed Brexit past its original March deadline and caused huge public anger.

She called them "a new Brexit deal" that Britain must now rally behind.

The government is aiming for the law to be approved by the time parliament's summer recess begins on July 20, which would allow Britain to leave the EU at the end of that month -- as long as MPs reject a second referendum.

Otherwise the process could be delayed until October 31 -- the deadline set by the EU -- or even later if EU leaders grant Britain another postponement.

"The majority of MPs say they want to deliver the result of the referendum. So I think we need to help them find a way. And I believe there is now one last chance to do that," May said.