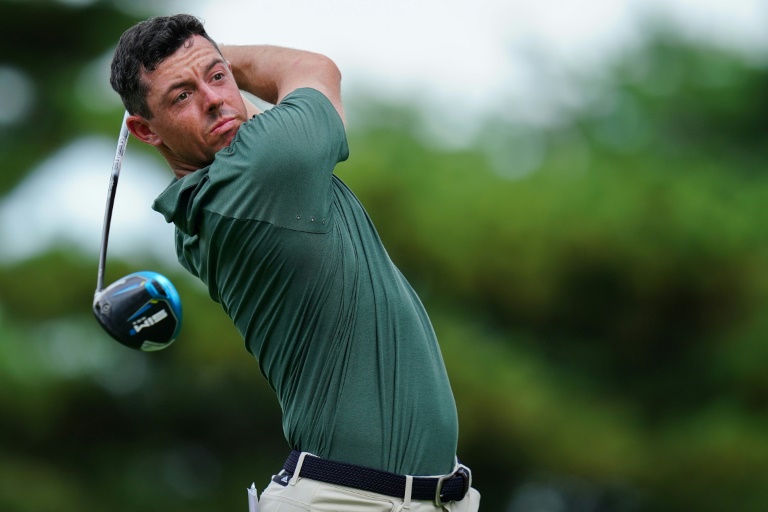 Rory McIlroy watches his drive from the 18th tee during round two of the Tokyo Olympics golf tournament. AFP/Yoshi Iwamoto

TOKYO - Rory McIlroy thundered into contention as Xander Schauffele shot an eight-under 63 to grab the clubhouse lead before a second "dangerous weather" suspension left 16 still to complete their second rounds at the Tokyo 2020 golf tournament.

American Schauffele carded an outrageous 44-foot eagle putt at the par-five 14th and finished with three straight birdies in a back nine of 30 to move to 11-under.

It left the world number five on 131, a shot clear of Mexico's Carlos Ortiz who had a four-under 67 to follow his first round 65.

Schauffele had just finished his round when play was halted because of a severe thunderstorm at 5:20 pm and eventually abandoned for the day more than an hour later.

"I just kind got in a nice flow there at the end. Kind of one of those situations where I wish I could play some more holes," Schauffele said.

"It was nice to sort of make that last putt on 18 before they blew that horn (to call off play)."

Earlier, Ireland's four-time major champion McIlroy shrugged off the day's first suspension for lightning, which lasted more than two hours, to card a 66 and stand four shots behind Schauffele.

McIlroy, taking the opportunity to play without a cap because of having no sponsor's obligations, ignited his round with a brilliant birdie-birdie-eagle run from the sixth hole.

"I sort of played similarly to how I played yesterday," said McIlroy after his five-under par round on the 7,447-yard par-71 course softened by days of rain storms.

Birdies at 14 and 17 took McIlroy briefly to eight-under par before an errant drive at the final hole saw only his second dropped shot of the day.

It proved a good day for Team Ireland as Shane Lowry carded a superb six-under 65 to move level with McIlroy meaning the pair, who were both resplendent in traditional green, are likely to play in the same third-round group on Saturday.

"It's not like we would be out there helping each other, bur we're definitely trying to produce at least one medal for the team," said Lowry, the 2019 British Open champion

"We would be out there kind competing against each other, but it would be nice to be playing with a friend and a really good golfer."