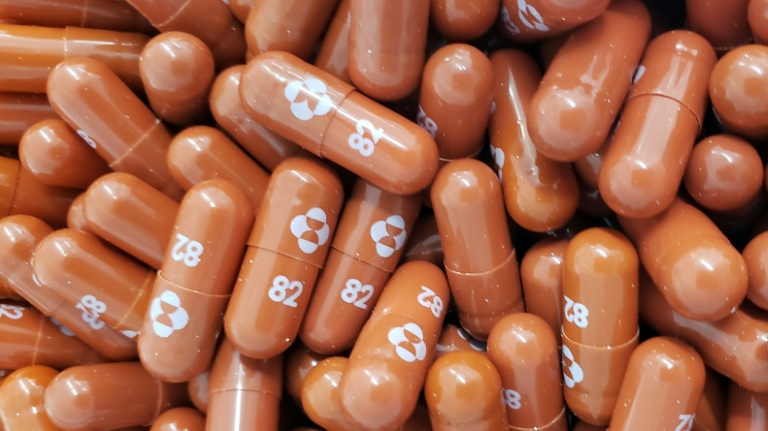 Capsules of the experimental anti-Covid drug molnupiravir, for which Merck is seeking emergency use authorization in the US

WASHINGTON - US pharmaceutical giant Merck said Monday that it has applied for emergency use authorization of its oral anti-Covid drug in the United States, a major step towards finding a simple pill to treat the disease.

Merck has submitted the application for molnupiravir, which it said earlier this month was shown to reduce hospitalisations by 50 percent.

It said it was working "with regulatory agencies worldwide to submit applications for emergency use or marketing authorization in the coming months."

"The extraordinary impact of this pandemic demands that we move with unprecedented urgency," Robert Davis, chief executive officer and president of Merck, said in the statement.

"That is what our teams have done by submitting this application for molnupiravir to the FDA within 10 days of receiving the data," he added.

Wendy Holman, chief executive of Merck's partner Ridgeback Biotherapeutics, called the application a "critical step towards making molnupiravir available to people who may benefit from an oral antiviral medicine that can be taken at home shortly after diagnosis with Covid-19."

In a late-stage clinical trial, Merck and Ridgeback evaluated data from around 770 patients -- roughly half of whom received either a five-day course of the pill, while the other received a placebo.

All the patients had lab-confirmed Covid-19 with symptoms that developed within five days of them being assigned to their respective groups.

Of the patients who received molnupiravir, 7.3 percent were hospitalized by day 29, compared to 14.1 percent of those on a placebo -- a relative risk reduction of around 50 percent.

Efficacy was said to hold up against variants of concern, including Delta, and the drug had a good safety profile.

Experts have said it is not a miracle cure and should complement vaccines, not replace them.

Merck said in the statement that it expects to produce 10 million courses of treatment by the end of 2021, with more courses expected to be produced in 2022.

The US has procured 1.7 million courses of molnupiravir should it be approved, with the option to buy more, and global health agency Unitaid said it was working with a partnership called ACT-Accelerator to secure supply for low- and middle-income countries.

Merck said it "plans to implement a tiered pricing approach based on World Bank country income criteria to reflect countries' relative ability to finance their health response to the pandemic."

The company said that, pending authorizations, it has also signed non-exclusive voluntary licensing agreements for molnupiravir with established Indian generic manufacturers to accelerate the drug's availability in more than 100 low- and middle-income countries.