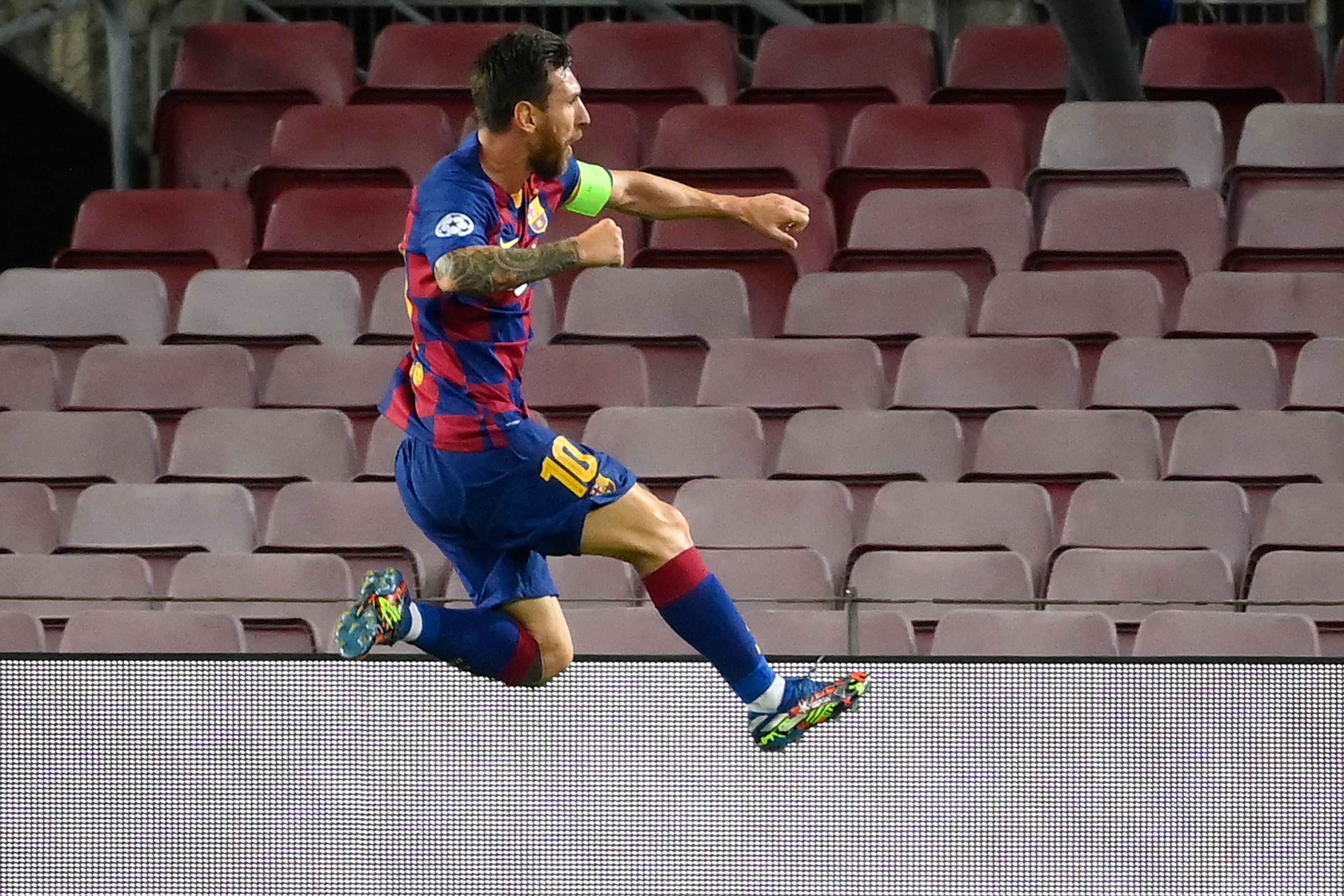 Barcelona's Argentine forward Lionel Messi celebrates after scoring a goal during the UEFA Champions League round of 16 second leg football match between FC Barcelona and Napoli at the Camp Nou stadium in Barcelona on August 8, 2020.

MADRID - Lionel Messi might never have been faced with a more daunting task at Barcelona than engineering a victory against Bayern Munich in Lisbon on Friday.

The only surviving former winners of European club football's greatest prize -- with five titles each -- meet in a heavyweight Champions League quarter-final behind closed doors at the Estadio da Luz.

It is not often that Messi's Barcelona come into such a big European tie as the underdogs, but they have this time, with Quique Setien's team having lost out to Real Madrid in the Spanish title race while Bayern appeared flawless on the way to winning a German league and cup double.

Messi is now 33, yet Barcelona appear more reliant on him than ever.

He scored twice against Bayern in the quarter-finals in 2009 when Barcelona went on to win the Champions League under Pep Guardiola.

He hit four against Arsenal the following year and five against Bayer Leverkusen in 2012 but on both occasions, Barca were favourites.

Messi also sank Real Madrid at the Santiago Bernabeu in 2011 when his double in the first leg of the semi-final, including one of the finest goals the competition has ever seen, transcended a rivalry that had been dragged to its ugliest point.

And he was part of perhaps the tournament's greatest comeback, the 6-1 destruction of Paris Saint-Germain in 2017 after Barcelona lost 4-0 in the first leg of that last-16 tie.

Yet this time threatens to be different.

With Luis Suarez and Antoine Griezmann alongside him, Frenkie de Jong and Sergio Busquets behind him and Jordi Alba out wide, Messi should not be on his own.

Even in defence, Gerard Pique still has a claim to be the best defender in La Liga and Marc-Andre ter Stegen is among the most impressive goalkeepers in the world.

"Bayern are playing really well and are full of confidence but we have the weapons to beat them," Griezmann told Barca TV.

But the sense remains that Messi must perform if Barcelona are to defeat Bayern, widely seen as the favourites to lift the trophy on August 23, at the end of the express knock-out tournament in Lisbon.

It will take something very special not only to lift his own team out of the doldrums but also to neutralise an opponent that many believe are the most complete side in Europe.

Barcelona therefore must first of all hope that Messi shows no ill effects from the ankle knock he suffered in last weekend's last-16, second-leg win over Napoli -- he has been back training normally.

The Catalans should certainly wonder how it got to this point, given they spent more than 500 million euros ($590m) over the last three seasons, bringing in players that should have complemented, not isolated, the Argentine.

The worry is that Bayern might not just beat Barcelona at the Estadio da Luz, but humiliate them.

If they do, Setien is likely to pay with his job, even if he only took over as coach in January, replacing Ernesto Valverde, who was also unable to shake this current crop into life.

The alternative is a statement performance that vindicates Setien, establishes him for next season and sends Barcelona into the semi-finals with the kind of momentum that could even take them all the way.

"We have to be optimistic, we are in good shape," said Setien after the Napoli game.

However, it would be a surprise to see Barcelona go on and lift the trophy, and it seems unthinkable they could do it without an intervention from Messi, who must be wondering too how the club that won the treble five years ago have come to rely on him so completely.

The challenge is not beyond Messi. But Barcelona must know he deserves more.