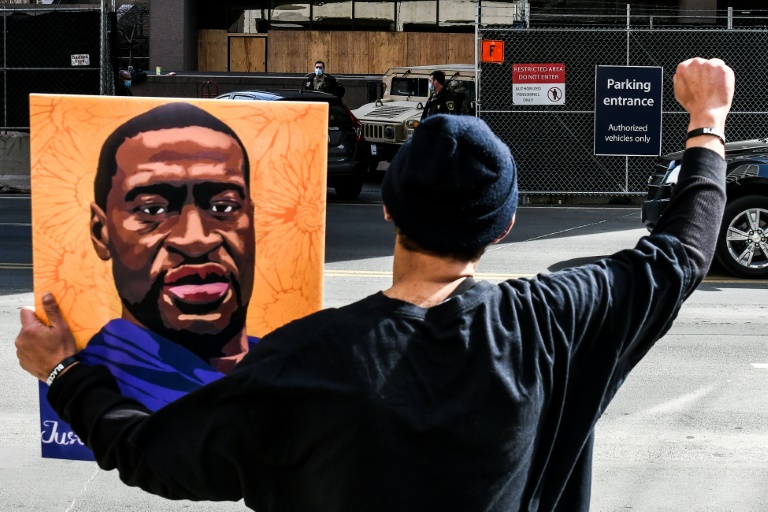 "Black Lives Matter" protesters in Minneapolis, Minnesota ahead of the trial of the police officer charged with killing George Floyd. AFP/Stephen Maturen/Getty Images

MINNEAPOLIS - Minneapolis residents braced for the opening on Monday of what is sure to be one of the nation's most closely watched trials in years -- that of the white policeman charged with killing George Floyd, a black man whose dying struggles were captured on a video seen around the world.

Jury selection begins at 8am (2pm GMT), though final debates over the exact charges against Derek Chauvin -- the now-former city officer who used his knee to pin a pleading, gasping Floyd by the neck to the pavement for nearly nine minutes -- could yet delay the proceedings.

For now, Chauvin is facing second-degree murder and manslaughter charges.

READ: Trial to begin for US policeman charged with George Floyd death

Chauvin, a 19-year veteran of the force, was released from prison on bail in the fall and is expected to plead not guilty to the murder and manslaughter charges.

Floyd's death laid bare already sore racial wounds in the United States, sparking months of sometimes violent protests against racial injustice and police brutality, both in the US and abroad.

Lawyers for both sides face the difficult task of finding jurors who, in the intensely publicised case, have not already made up their minds about Chauvin's guilt.

READ: US policeman accused of murdering George Floyd to appear in court

The process is expected to take up to three weeks, with arguments slated to begin on 29 March.

Protesters already gathered near the courthouse on Sunday, with many holding up "Black Lives Matter" placards and demanding "justice for George Floyd."

Chauvin's case promises to be extraordinary: It will feature star attorneys, be held under tight security and be livestreamed.

READ: George Floyd: The man who became symbol of fight against racism

It will feature gripping testimony, as foreshadowed Sunday by Benjamin Crump, a prominent civil rights attorney representing the Floyd family.

"The public is begging the police to take the knee off his neck. They say his nose is bleeding; he can't breathe; he is going unconscious -- you're going to kill him."

All four officers were fired by the Minneapolis Police Department.

Floyd's arrest was prompted by accusations that he tried to pass a counterfeit $20 bill in a nearby store.