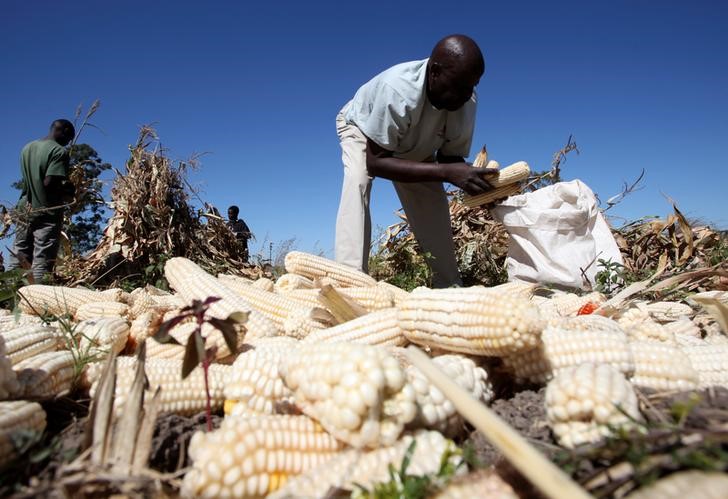 The country is experiencing its worst economic crisis in a decade, marked by soaring inflation and shortages of food, fuel, medicines and electricity.

Half of Zimbabwe’s population needs food aid after a devastating drought across the southern Africa region, worsened by an economy expected to shrink by 6.5% this year and month-on-month inflation at a four-month high of 38.75%. [nJ8N27A00W]

Zimbabwe’s grain agency buys grain from farmers and releases it onto the market at subsidised prices, costing the treasury tens of millions of US dollars. The government had planned to remove the subsidy in its 2020 budget.

Mnangagwa was quoted in the state-owned Herald newspaper as saying that would no longer happen.

“We cannot remove the subsidy,” he was quoted as saying. “So I am restoring it so that the price of mealie-meal is also reduced (next year).”

The removal of the government’s grain subsidy would have seen a 10 kg bag of maize meal, the country’s staple, costing 102 Zimbabwean dollars (about US$6.30), against 60 Zimbabwe dollars now, in a country with 90% unemployment.

Zimbabwe’s reintroduction of a local currency after 10 years of dollarisation, coupled with the removal of subsidies on fuel and electricity, unleashed inflation, triggering frequent and sometimes deadly protests against Mnangagwa’s government.

Rights groups say at least 17 people were killed and hundreds were arrested in January, after security forces cracked down on protests against fuel price increases. Police have banned further protests.

Early hopes that Mnangagwa, who took over from the long-ruling former president Robert Mugabe after a November 2017 coup, would revive the economy are fast fading amid a worsening economic crisis and slow-paced political reforms.