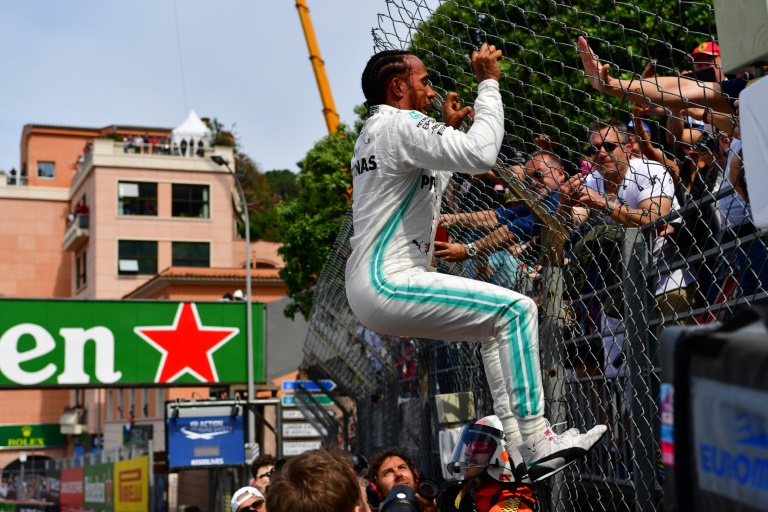 Lewis Hamilton celebrated victory with the crowd in Monaco in 2019, but the principality has yet to decide if fans will be allowed this year. AFP/Andrej Isakovic

MONACO - Monaco announced that it was easing health restrictions, without resolving the thorny dilemma of whether fans would be allowed at its Formula 1 Grand Prix next month.

"Monaco is taking its decisions in the light of its own situation, in full sovereignty but also in mutual agreement with France," the principality's Minister of State Pierre Dartout told a press briefing.

He said that from Monday, the curfew would move to 9pm and there would be a controlled reopening of restaurants in the evening. The provisions extend to May 2, three weeks before the Monaco Grand Prix is scheduled for May 23.

"It is not a question of complacency, but a certain number of favourable developments have taken place," Dartout said, saying an infection rate of the virus had fallen to 80 per 100,000 on Wednesday.

The health crisis has wiped out two years of growth in the principality, halving turnover in the casino, hotel and restaurant sectors but the biggest blow in 2020 was the cancellation of the Grand Prix, which usually generates around 100 million euros ($120-million) in revenue.

Three motor races cancelled last year, are back on the calendar this year: the Monaco Historic Grand Prix on April 25, the E-Prix on May 8 and the main event, the F1 Grand Prix.

For the Historic Grand Prix, there will be a closed practice session on Friday but a crowd, limited to local residents and employees, will be allowed for qualifying on Saturday and for the race on Sunday, the government announced.

For the Grand Prix at the end of May, Monaco has not yet given any public indication of whether fans would allowed to watch from the stands, terraces and balconies, or whether the  traditional influx of visiting fans would be permitted.

According to the generally well-informed weekly Monaco Hebdo, "the closed-door system has been ruled out for the moment" and "several scenarios are being studied by the authorities. Among them, a 30 percent to 50 percent rule seems to be favoured".