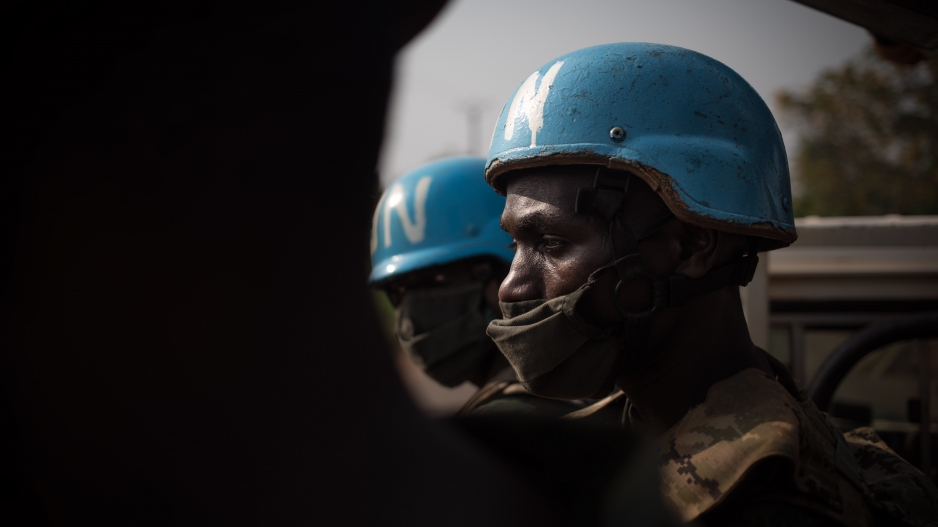 File: Soldiers from the Rwandan battalion of the United Nations Multidimensional Integrated Stabilization Mission in the Central African Republic (MINUSCA) scan the horizon during a patrol on the road to Damara, where skirmishes took place during the week, on January 23, 2021. FLORENT VERGNES / AFP

GENEVA - More than 200,000 people have been displaced by election-based violence in the Central African Republic in the past two months, the UN said Friday, with around half fleeing to neighbouring countries.

UNHCR, the United Nations refugee agency, said 100,000 people remained internally displaced within the CAR, while 92,000 refugees have crossed the river border with the Democratic Republic of Congo (DRC) and 13,240 have fled to Cameroon, Chad and the Republic of Congo.

"Refugees have told UNHCR that they fled in panic when they heard gunshots, leaving their belongings behind.

"Most refugees are living in dire conditions in remote, hard-to-reach areas close to the rivers without basic shelter and facing acute food shortages."

He said they were dependent on catching fish and whatever food local villagers could spare.

For many refugees, the river is the sole water source for drinking, washing and cooking. Malaria, respiratory infections and diarrhoea have become commonplace, said Cheshirkov.

"Refugees urgently need food and shelter, drinking water, essential aid items, sanitation and healthcare to prevent the spread of Covid-19 and other diseases," he said.

Landlocked CAR is one of the world's poorest nations and has seen a string of coups and wars since it gained independence from France in 1960.

Rebels controlling about two-thirds of the perennially-volatile nation launched an offensive a week before presidential elections on December 27, trying to blockade the capital Bangui and carrying out several attacks on key national highways.

On January 4, President Faustin Archange Touadera was declared victor of the ballot, although the CAR's political opposition cried foul.

Two voters out of three did not cast their ballot, mainly due to insecurity in a country caught up in civil conflict for eight years.

Within the CAR, the continuing unrest has hampered the humanitarian response and made access to the internally displaced more difficult, said Cheshirkov.

"The main road used to bring supplies has also been forced shut," he added.

"Armed groups are reportedly present in the Batangafo and Bria sites where displaced communities are sheltering, in violation of the humanitarian and civilian nature of those sites.

"Such presence poses a grave protection risk for those displaced, from risk of forced recruitment to restriction of movement to extortion or threats."

He said the refugee agency was receiving troubling reports of human rights violations, with armed groups moving into villages.

"We're hearing reports of pillaging, of sexual violence that is increasing rapidly and the situation is really concerning," said Cheshirkov.

The UNHCR issued an urgent appeal for funding so humanitarian organisations can deliver assistance to the CAR refugees and their hosts.

"Funding for UNHCR's humanitarian response is already critically low and under severe pressure as the numbers of refugees and their needs have continued to increase," Cheshirkov said.

"Our funding requirements for the CAR situation in 2021 amount to $151.5 million and is just two percent funded," he said.

"Needs are likely to grow with the new displacement."

The UNHCR said it was pre-positioning emergency supplies in the DRC before areas become inaccessible by road when the rainy season arrives in six weeks' time. After that, supplies would have to be airlifted in, at far greater cost.