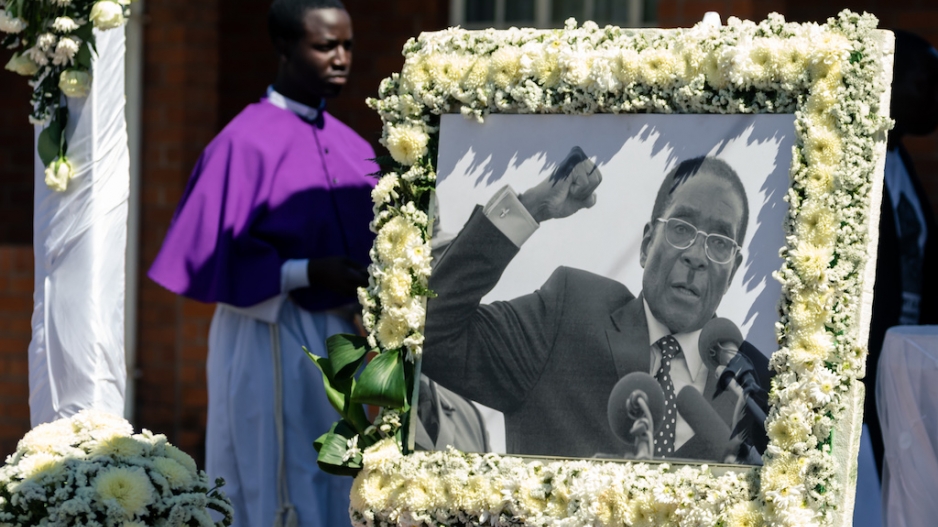 A priest walks past a portrait of Robert Mugabe during the burial of the former Zimbabwe leader at his home village in Kutama, on 28 September 2019.

HARARE - The family of former Zimbabwe president Robert Mugabe gathered in his rural homestead on Saturday, three weeks after his death, to attend a much-awaited burial ceremony in the village of Kutama.

His remains will be laid to rest in the courtyard of his home in the district of Zvimba, about 90 kilometres west of the capital Harare.

Hundreds of mourners assembled for the low-key event, which was initially intended to be a private family ceremony.

Some were singing and dancing.

Others sat quietly under two white tents set up for the occasion.

Mugabe's widow Grace and his children accompanied the casket A- drapped in Zimbabwe's green, yellow, red and black flag.

No senior government officials were among the audience.

The Mugabe family decided to bury Zimbabwe's founding father in Kutama after weeks of wrangling with the government, who wanted the body to rest at the National Heroes Acre in Harare.

A mausoleum was being constructed at the site, which is reserved for heroes of Zimbabwe's liberation struggle.

Initially hailed as a pan-African liberator, Mugabe's rule became increasingly repressive as he cracked down on his political opponents.

This combined with a series of disastrous economic policies to drive millions of Zimbabweans abroad. Mugabe was toppled by his formerly loyal army generals in 2017.

Many in Mugabe's family are bitter over his ouster and the role played by his deputy and successor Emmerson Mnangagwa, who was elected president in 2018.