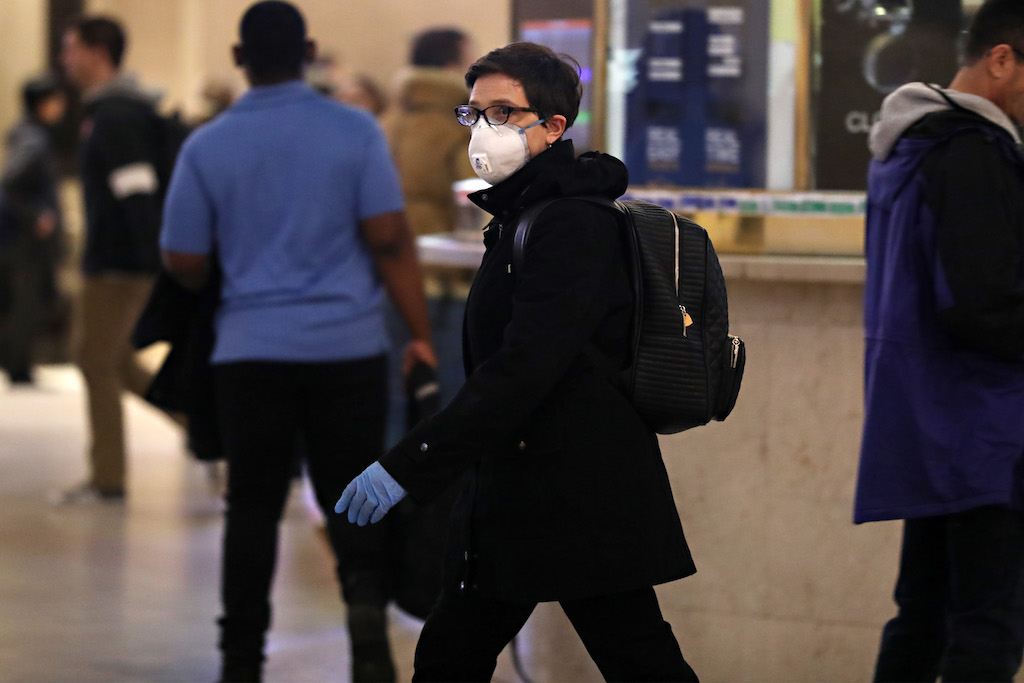 A commuter wears a mask and gloves at Grand Central Terminal during rush hour in New York City.

NEW YORK - New York Governor Andrew Cuomo warned of "troubling and astronomical numbers" in the rate of coronavirus infections in New York, saying they were doubling every three days.

Cuomo said the virus could now peak in one of the country's most populous states in as few as two weeks, with some 40,000 people needing intensive care -- numbers that could severely stress under-equipped hospitals that currently have only 3,000 intensive care unit beds.

"We haven't flattened the curve and the curve is actually increasing," he told reporters at Manhattan's Javits Center, where the Army Corps of Engineers is constructing an emergency hospital in the large space that normally hosts conventions.

"We are not slowing it. And it is accelerating on its own," he said.

"One of the forecasters said we were looking at a freight train coming across the country. We're now looking at a bullet train."

The governor urged the federal government to release some 20,000 ventilators to New York, a need he dubbed "critical."

"Deploy the ventilators around the country as they are needed," Cuomo pleaded. "New York is the canary in the coal mine."

He also urged Washington to use the federal Defense Production Act, which empowers the national government to order manufacturers to produce necessary equipment.

"First order of business is save lives period, whatever it costs."

The governor of New York -- which has all but shut down, with only essential businesses like supermarkets and pharmacies allowed to continue operating normally -- reiterated that most people who contract coronavirus will self-resolve.

He said research is underway into an antibody test that could detect the virus in people even after the infection has passed, who may now have immunity for a "significant" time period.

Cuomo also said federal authorities had authorized experiments in taking plasma from those who had been infected and transferring it into people still struggling, hoping antibodies can assist recovery.