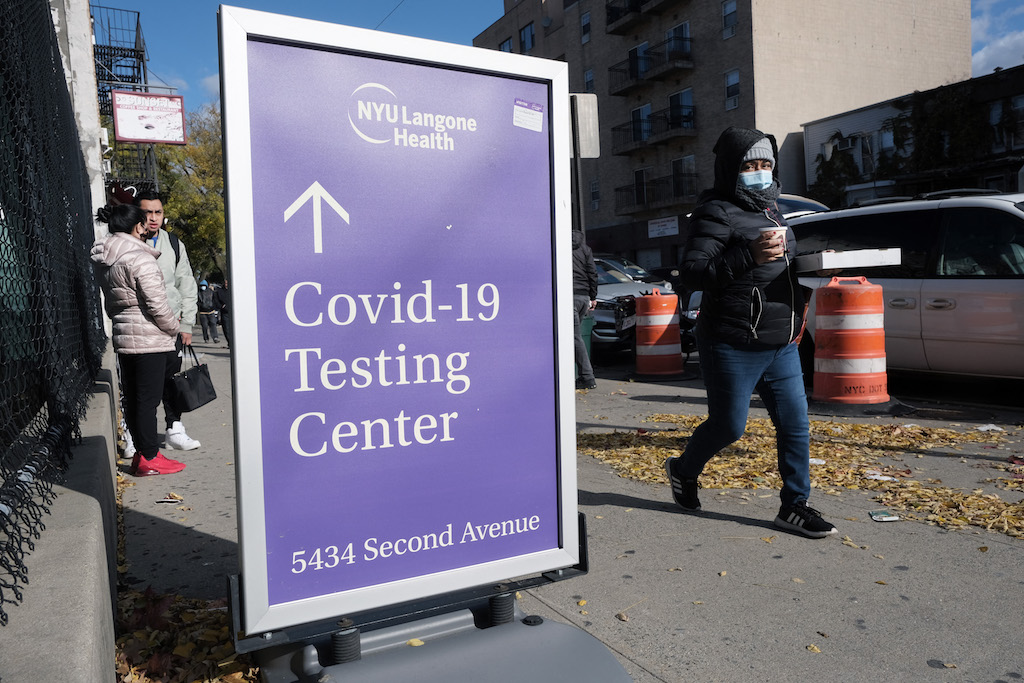 A sign outside of a hospital advertises COVID-19 testing in New York City. AFP/Spencer Platt/Getty Images

NEW YORK - With Omicron cases on the rise, New York health officials have reported an increase in hospitalised children, as the White House promised to quickly resolve the United States' Covid-19 test shortage.

The New York State Department of Health warned "of an upward trend in pediatric hospitalisations associated with Covid-19," in a statement.

In New York City, it "identified four-fold increases in Covid-19 hospital admissions for children 18 and under beginning the week of December 5 through the current week," it said.

Approximately half of the admissions are younger than five, an age group that is vaccine ineligible, the department added.

The number of Covid-19 cases in the United States is on the rise, with an average of nearly 190,000 new infections daily over the past seven days, according to figures from Johns Hopkins University.

The arrival of the new Omicron variant, compounded by holiday celebrations that typically include travel and family reunions, have caused a rush on tests in the United States, where it is difficult to get one in many locations.

"One of the problems is that that's not going to be totally available to everyone until we get to January and there are still some issues now of people having trouble getting tested," Fauci told ABC News.

"But we're addressing the testing problem," he added, saying it should be corrected "very soon."

On Tuesday, President Joe Biden announced a raft of new measures as the United States battles its latest Covid surge, including shipping half a billion free home tests in the wake of the Christmastime testing crunch.

However, the White House, whose strategy has for weeks been mainly focused on vaccinations, has faced strong criticism over the fact that many tests won't be available until January.

Fauci on Sunday emphasised that the administration was ramping up to tackle the spike and stressed that Omicron was "extraordinarily contagious."

Recent studies in South Africa and Britain indicate that Omicron was less likely to lead to hospitalisation than the previous strains of the virus and that the duration of hospital stays and oxygen needs for patients were lower, Fauci noted.

But he also warned that Omicron's apparent lower severity is likely to be neutralized by how fast it is spreading.

"The issue that we don't want to get complacent about... is that when you have such a high volume of new infections, it might override a real diminution in severity," Fauci said.