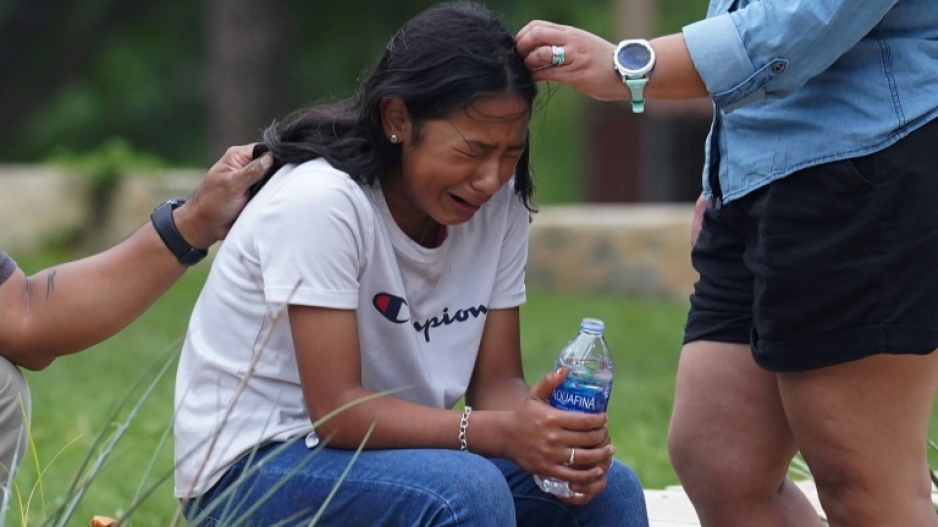 Tears outside the Willie de Leon Civic Center in Uvalde, Texas after a gunman killed 19 small kids and two teachers at an elementary school

UVALDE - A tight-knit Latino community in Texas was wracked with grief Wednesday after a teenager wearing body armour marched into an elementary school and killed 19 children and two teachers -- the latest spasm of America's gun violence crisis.

Details of the atrocity, the victims and the 18-year-old gunman -- who was killed by police -- emerged as America grappled with its deadliest school shooting since the Sandy Hook tragedy in Connecticut a decade ago.

"This town is heartbroken, devastated," said Adolfo Hernandez, whose nephew was at Robb Elementary in Uvalde, a small mainly Hispanic town about an hour from the Mexican border, during the Tuesday shooting.

"We feel like there's a black cloud above this town," he told AFP. "You just want to pinch yourself and wake up from that horrible nightmare."

Grief-stricken and angry, President Joe Biden addressed the nation in the hours after the attack, calling on lawmakers to take on America's powerful gun lobby and enact tougher laws to curb gun violence. 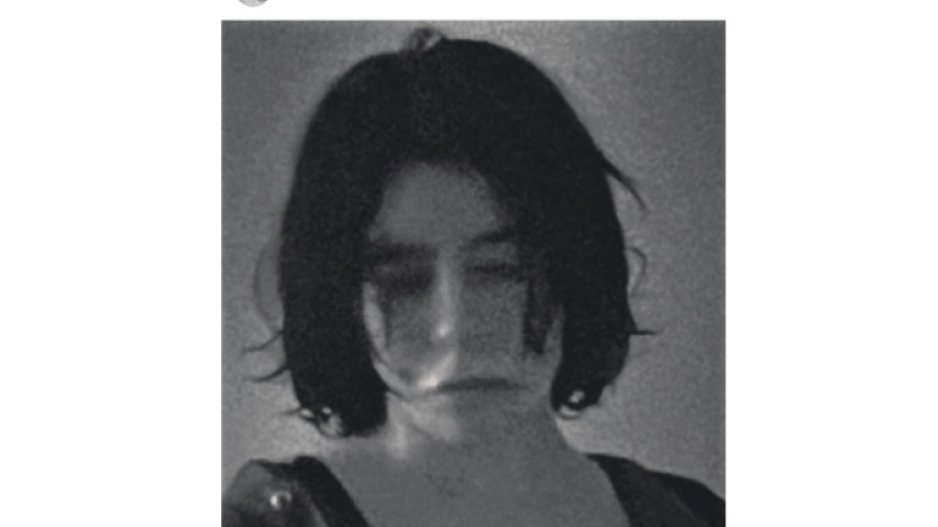 An undated screenshot from the Instagram account of Salvador Ramos, identified as the gunman in the May 24, 2022, shooting at Robb Elementary School in Uvalde, Texas

"When in God's name will we do what we all know in our gut needs to be done?" Biden asked, his voice slow and heavy with emotion.

In Uvalde, police blocked off the area around the school on Wednesday and there was little traffic or pedestrian movement. The neighborhood is one of modest single-story homes, with small yards and often a swing set and an outdoor grill for barbecues.

Identified as Salvador Ramos, the gunman was a resident of the town and a US citizen.

According to Texan officials, Ramos shot his grandmother before heading to Robb Elementary School around noon where he abandoned his vehicle and entered with a rifle.

Law enforcement officers at the school engaged Ramos with gunfire but he managed to get into a classroom and lock it to barricade himself, then started shooting kids and the two teachers, said Chris Olivarez of the Texas Department of Public Safety.

All the fatalities occurred in the one classroom, until police managed to shoot and killed Ramos.

"Just goes to show you complete evil from this shooter," Olivarez told CNN.

Details have emerged of the gunman as a deeply troubled teen -- he was repeatedly bullied over a speech impediment that included a stutter and a lisp and once cut up his own face "just for fun," a former friend of Ramos, Santos Valdez, told The Washington Post. 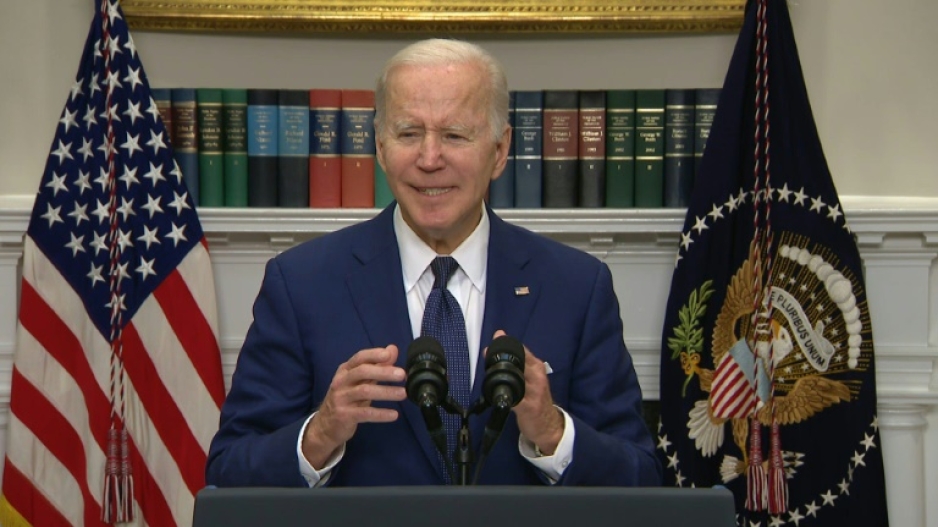 As shattered families shared the news on social media, the names of the murdered children, most of them of Latino heritage, began coming out: they included Ellie Garcia, Jayce Carmelo Luevanos, Uziyah Garcia.

"My little love is now flying high with the angels above," Angel Garza, whose daughter Amerie Jo Garza had just celebrated her 10th birthday, posted on Facebook.

"I love you Amerie jo," he wrote. "I will never be happy or complete again."

More than a dozen children were also wounded in the attack at the school, attended by more than 500 students aged around seven to 10 years old, most of them economically disadvantaged. 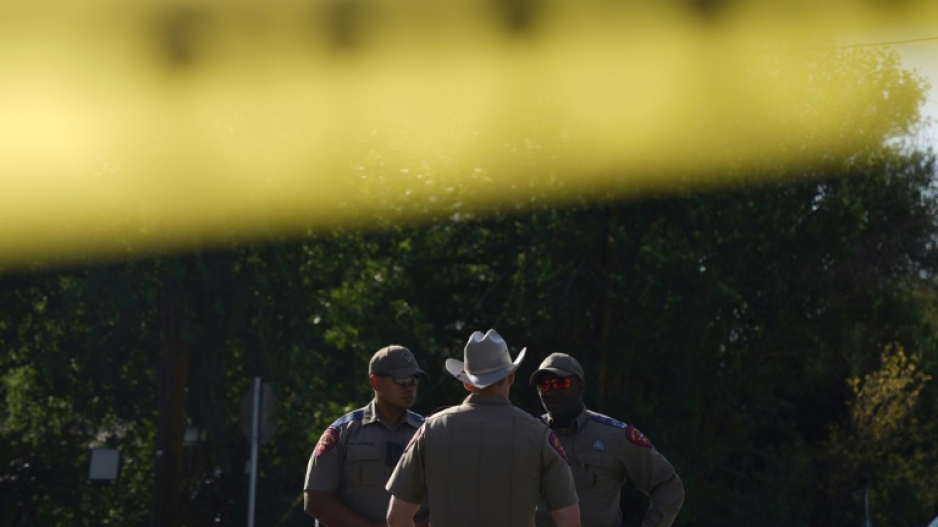 Officers stand outside Robb Elementary School in Uvalde, Texas, on May 25, 2022 after the massacre

Fourth-grade teacher Eva Mireles was shot and killed while trying to protect her students, her aunt Lydia Martinez Delgado told the New York Times. She said Mireles was proud of teaching kids of Latino heritage.

A cousin of Mireles, Amber Ybarra, called her a hero.

"Her cooking was amazing. Her laughter was contagious, and she's going to be missed," Ybarra told NBC's "Today" show. "She put her heart into everything that she did."

There have been more mass shootings -- in which four or more people were wounded or killed -- in 2022 than days so far this year, according to the non-profit Gun Violence Archive which recorded 213 such incidents.

The Uvalde shooting was the deadliest such incident since the 2012 Sandy Hook shooting in Connecticut, in which 20 elementary school children and six staff were killed. 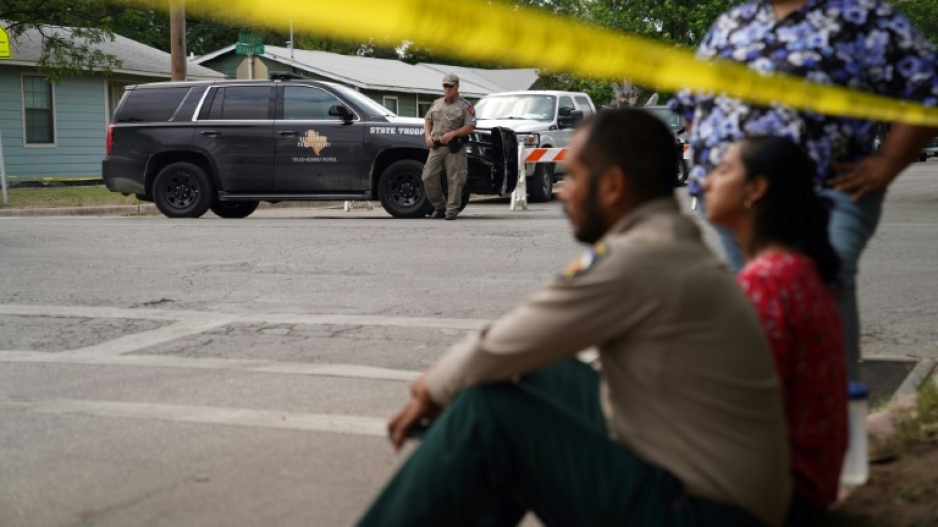 Despite recurring mass-casualty shootings, multiple initiatives to reform gun regulations have failed in the US Congress

Senator Chris Murphy, a Democrat from Connecticut, where the Sandy Hook shooting took place, made an impassioned appeal for concrete action to prevent further violence.

"This isn't inevitable, these kids weren't unlucky. This only happens in this country and nowhere else," Murphy said on the Senate floor in Washington.

The deadly assault in Texas follows a series of deadly mass shootings in the United States this month: most recently on May 14 when an 18-year-old self-declared white supremacist shot 10 people dead at a grovery store in Buffalo, New York.

Despite recurring mass-casualty shootings, multiple initiatives to reform gun regulations have failed in the US Congress, leaving states and local councils to strengthen -- or weaken -- their own restrictions.