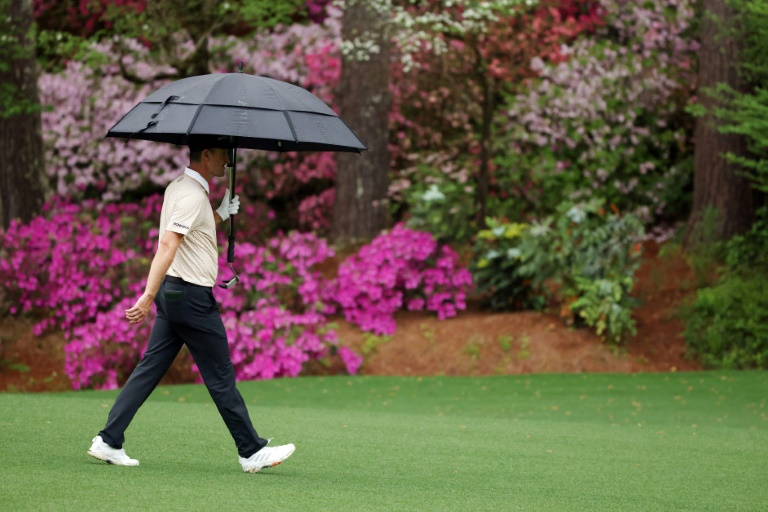 England's Justin Rose walks up the 13th fairway during rain showers in Saturday's third round of the Masters. AFP/Kevin C. Cox

AUGUSTA - Justin Rose had been looking for a wire-to-wire victory at the Masters. Now his chances to win are hanging by a thread.

The 40-year-old Englishman sank a long par putt at the 18th hole on Saturday to fire a level par 72 for the second straight day at  Augusta National and watch Japan's Hideki Matsuyama seize a four-stroke lead on 11-under 205 with a stunning 65.

Rose shares second on seven-under 209 after 54 holes with Australian Marc Leishman and Americans Will Zalatoris and Xander Schauffele entering Sunday's final round.

"All the guys chasing at 7-under par are all capable of that little run that Hideki has had, so it's all up for grabs tomorrow," Rose said.

Reigning Olympic champion Rose, whose only major win came at the 2013 US Open, began with back-to-back birdies but had bogeys at the fourth and fifth holes and only played level par the rest of the way.

"There's not really a linear progression to 12-under par or whatever you might need to be. You know there's going to be those dips and peaks and valleys out there."

Two-time Masters runner-up Rose said the secret to fighting back on Sunday would be driving.

"Probably drive it better," Rose said. "The drives that hit the fairway were a little spinny as well, so I wasn't really connecting with the back of the ball just as I would like."