By the numbers: Japan's Typhoon Hagibis compared to killer 1958 storm 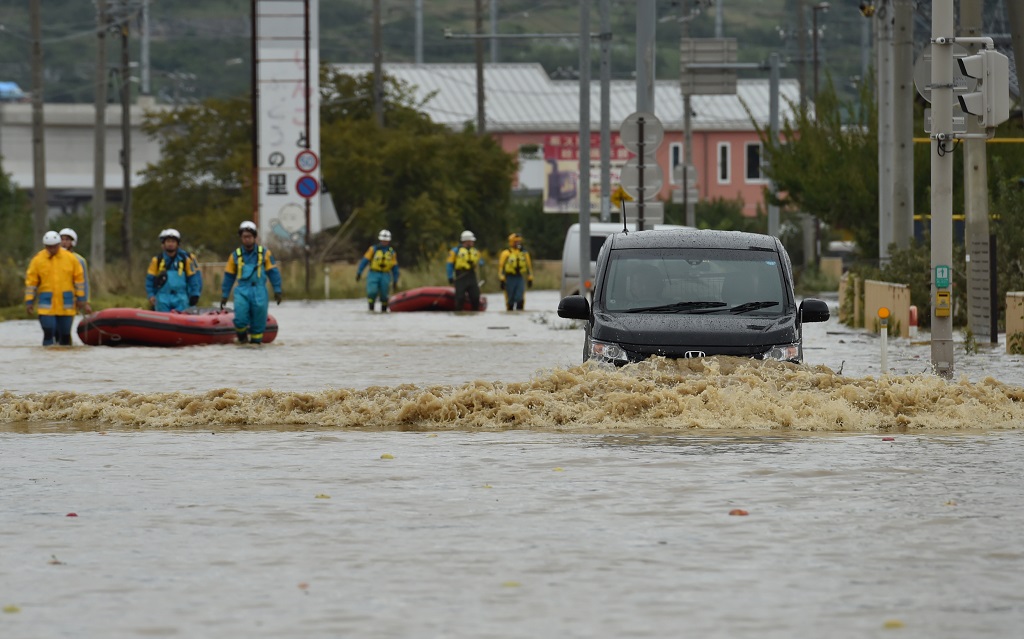 A vehicle travels down a flooded street in the aftermath of Typhoon Hagibis in Nagano on October 14, 2019.

TOKYO - Typhoon Hagibis, which means "speed" in the Philippine language Tagalog and made landfall on Japan's main island of Honshu on Saturday evening, could be the worst storm the country has experienced since 1958, the government said.

Here are some facts and figures to compare this typhoon with the one that hit Japan then:

- At least 31 people were killed in Typhoon Hagibis that left vast sections of towns in central and eastern Japan under water, with another 15 missing and 186 injured, public broadcaster NHK said.

- More than 92,000 households were still without power early on Monday, a national holiday, Japan's Ministry of Economy, Trade and Industry said. About 425,000 homes had lost power, the government said on Sunday.

- Hagibis was packing winds of 180 km per hour near its centre and gusts of up to 252 kmph, broadcaster NHK reported the Japan Meteorological Agency (JMA) as saying on Saturday.

- The storm brought record-breaking rainfall to many areas, including the popular resort town of Hakone, which was hit with 939.5 mm of rain over 24 hours.

- The heavy rain caused Chikuma river in Nagano prefecture, northwest of Tokyo, to flood its banks. Some houses along the river were nearly fully submerged in water and at least one person was rescued from the roof of a house by helicopter, NHK said. Part of a road was swept away in flooding.

READ: Blame it on the weather: how typhoon caused storm at RWC

Typhoon Ida, known as the "Kanogawa Typhoon" in Japanese, which struck on September 26, 1958, was named after the river that runs through the Izu Peninsula in Shizuoka Prefecture.

- The flooding of the Kanogawa and other rivers, along with mudslides, left 888 people dead and 381 missing, the Mainichi newspaper reported. Another 12,000 people were left homeless, according to the Encyclopaedia of Hurricanes, Typhoons and Cyclones.

- Ida had winds of 190 kmph when it hit, according to the encyclopaedia.

- The central Izu Peninsula and the Kanto region, which includes Tokyo, both received record rainfall. The Izu Peninsula received a total of 750 mm of rain, while central Tokyo got 392.5 mm in 24 hours, NHK reported.

- The heavy rain resulted in at least 1,900 landslides, including 786 in the Tokyo area, according to an article from the time in the Lodi News-Sentinel daily newspaper.