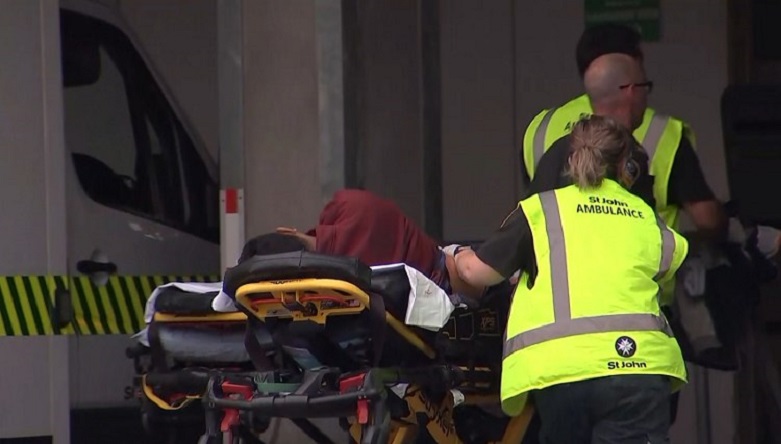 File: An image grab from TV New Zealand taken on March 15, 2019 shows a victim arriving at a hospital following the mosque shooting in Christchurch.

The government this week ordered a judicial inquiry into whether the South Pacific nation's intelligence services could have prevented the March 15 attack amid criticism the white supremacist gunman went unnoticed as they were too focused on Muslim extremists.

Andrew Little -- the minister responsible for the GCSB and SIS intelligence services -- said he had signed powerful surveillance warrants as information gathering continued in the wake of the attack.

"I have given authority to the agencies to do intrusive activities under warrant, the number of those (warrants) I'm not at liberty to disclose," he told Radio New Zealand.

Little said intelligence services typically monitored 30-40 people but that number had now increased, although he was unwilling to reveal by how much.

He said a warrant permitted anything from physical surveillance to the monitoring of telecommunications activity.

"The whole gambit of what would otherwise be described as intrusive activity," he told the New Zealand Herald.

"The purpose of a warrant is to authorise and effectively make lawful what would otherwise be unlawful activity."

Little denied New Zealand had proved a "soft target" for the accused gunman, an Australian with apparent links to right-wing groups who reportedly moved to the country with the intention of carrying out an attack.

Little said he maintained confidence in the intelligence services and until the inquiry into their actions was complete it was "premature" to say they had failed.

"Until there's a very microscopic look at what the agencies have been doing and whether they've missed anything, I can't say for certain," he told RNZ.

"It's important for me, the agencies, but ultimately for public confidence that we let that commission of inquiry do its job and reach its conclusions."

The raids took place at opposite ends of the city centre, the first at 8:00pm (0700 GMT) Tuesday and the second around 1:00 am Wednesday.

Police said the first operation was "in relation to an ongoing inquiry" but refused to say if either raid was linked to the Christchurch shootings.