Oil spill adds to list of Dorian-induced woes in Bahamas 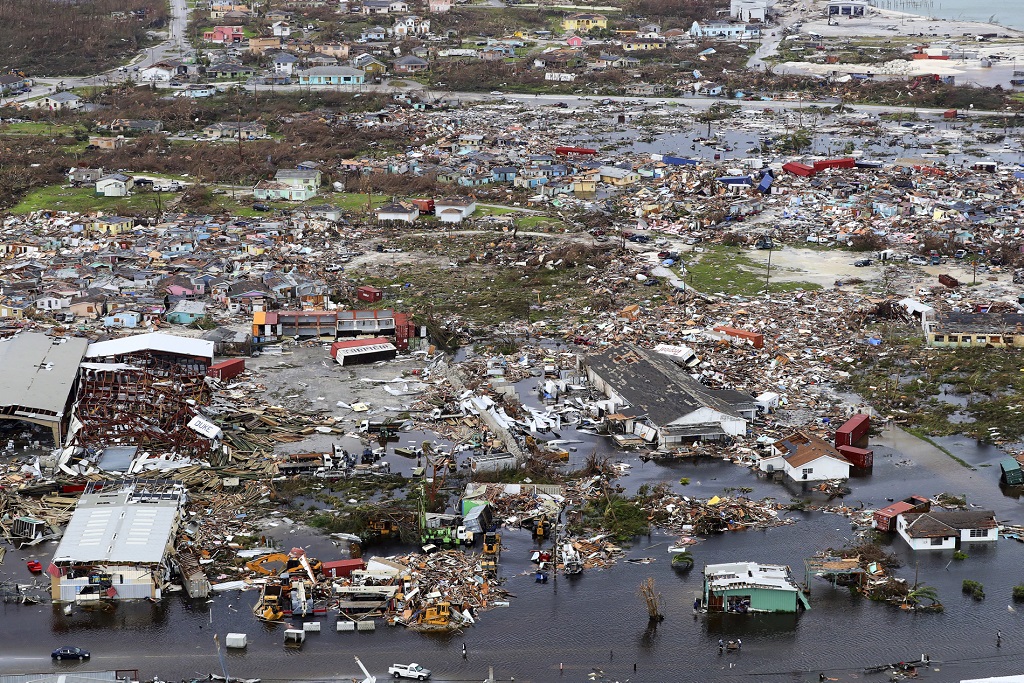 A handout aerial photograph released by the UK Ministry of Defence (MOD) on September 4, 2019 shows debris and destruction in the aftermath of Hurricane Dorian on the island Great Abaco in the northern Bahamas on September 3, 2019.

FREEPORT, Great Bahama, Bahamas - The air smells like fuel, the ground is covered in a black paste-like substance and the residents of Grand Bahama are afraid.

After sowing mass destruction across the island, Hurricane Dorian delivered one final blow: an oil spill at the Norwegian Equinor facility.

Dozens of residents of the small town of High Rock have set up tents among the rubble that was once their homes, where they divvy up meager handouts that come their way.

They survive amid the disaster, but now, adding insult to injury, they fear that the air that they breathe and the water that they drink is not safe.

Residents say the water filters they were given are not useful against the toxicity.

The oil is "deadly, deadly," said Marco Roberts, 38, holding a mask and lamenting the poisoned state of his island.

Six kilometers away the ground is saturated with a black, thick paste.

"They need to evacuate the whole East End or come do something," Roberts said.

At ground zero, several huge oil storage tanks are colored black by overflown oil, which has spread over a still yet to be defined section of land near the coast.

It remains unknown if oil from the Equinor facility reached the ocean.

Equinor said in a statement "there is currently no observed leakage of oil to the sea from the South Riding Point terminal."

However, it said, "surveillance has identified potential product in open waters 70-80 kilometers northeast of the terminal within Long Point Bight close to Little Abaco Island."

"There are also indications that the product may have impacted a section of the coastline," it said.

The spill occurred at Equinor's South Riding Point terminal, which has a storage capacity of 6.75 million barrels of crude and condensate.

According to Equinor, the tanks were storing 1.8 million barrels when the hurricane hit.

Normally, hurricanes blow through the Bahamas in a matter of hours.

But Dorian stalled for three days over the northern edge of the archipelago, causing widespread damage on the islands of Grand Bahama and Abaco.

"Before the hurricane hit, nine of our 10 tanks at the terminal had aluminium domed roofs," said Equinor spokesman Erik Haaland. "Five of these roofs are now gone."

Equinor said it had an "advanced onshore response team" working onsite, as well as more than 200 personnel focused on response around the world.

Two vessels, one of which arrived Tuesday and one slated to arrive Thursday, were to help in the effort, carrying 42 personnel and onshore oil recovery equipment.

Environmental activist Joseph Darville said he has fought for years with the NGO Waterkeepers Bahamas against the terminal, located along a coast that is dependent on tourism and fishing and whose water table is only a meter (yard) deep.

Darville came to the site to examine whether the spill contaminated the beach.

The ocean was calm and intensely turquoise, but the vegetation has been destroyed and strewn branches from the hurricane create a sad landscape.

He was glad to see small, recently born fish in the water and thought it was a good sign for now.

"This is where most of all of our seafood come from, from this area, from these magnificent coral reefs," he said, including deep-sea fish, like red snapper, grouper, and lobster.

The area's bonefish, he said, is a $7-billion industry.

Pointing to the beach, he said: "This is where they go along the shore... and spawn by the millions about three miles offshore."

"So this is a sign to us not to be so foolish in the future," he said.