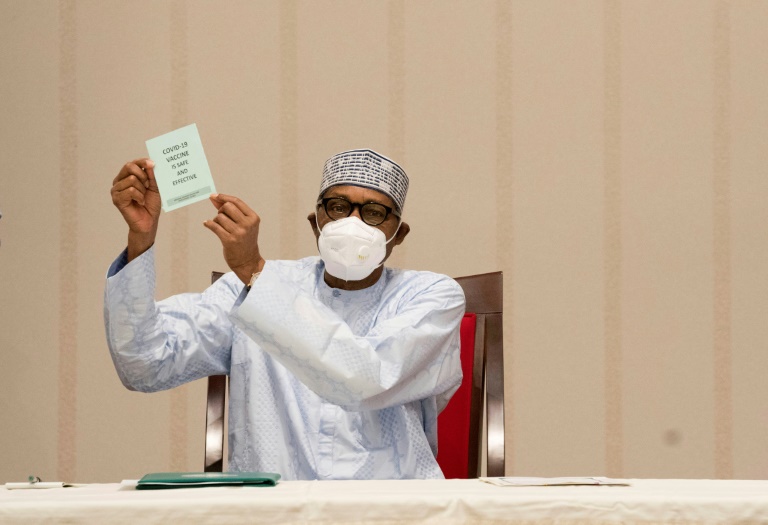 Nigerian President Muhammadu Buhari shows his vaccination certificate after getting a COVID-19 jab at the presidential villa in Abuja. AFP/Kola Sulaimon

ABUJA - Critics of Nigerian President Muhammadu Buhari have launched an outcry after he flew to London for a medical visit, highlighting his frequent trips abroad for treatment and the country's ramshackle health system.

Buhari (78) has made several trips to London since he came to power in 2015 and was re-elected for another four-year term in 2019.

Although the nature of his ailment has never been made public, Buhari confessed in one of the trips that he had "never been so ill" and that he had received several blood transfusions.

In his latest visit to the British capital on Tuesday, the presidency said the retired general, who was military ruler in the 1980s, would be away for two weeks.

"He is due back in the country during the second week of April," his office said in a statement.

The main opposition Peoples Democratic Party (PDP) condemned the trip, saying it was an indication that Nigeria's healthcare system had failed.

"It is indeed worrisome that under President Buhari, even the hitherto highly rated State House Clinic, has become so moribund that it cannot provide a simple medical checkup service for Mr. President," the PDP said in a statement.

The party said Buhari's frequent trips were a drain on the treasury.

"The PDP is disturbed that while Mr. President jets out for medical treatment in well-equipped hospitals abroad, our hospitals and medical personnel are in very sorry situation while millions of our compatriots suffer," it said.

Both local and social media were also full of outraged remarks by Nigerians over the trip.

The latest London visit came just hours before a threatened strike by doctors in government hospitals over pay and inadequate facilities.

Buhari's health became a subject of debate ahead of the last election when the opposition claimed he was not physically fit to govern -- but Buhari won a second term.

The president's state of health became a sensitive subject in Nigeria after former leader Umaru Musa Yar'Adua, died in 2010 and it emerged that his ailment had been kept secret for months.