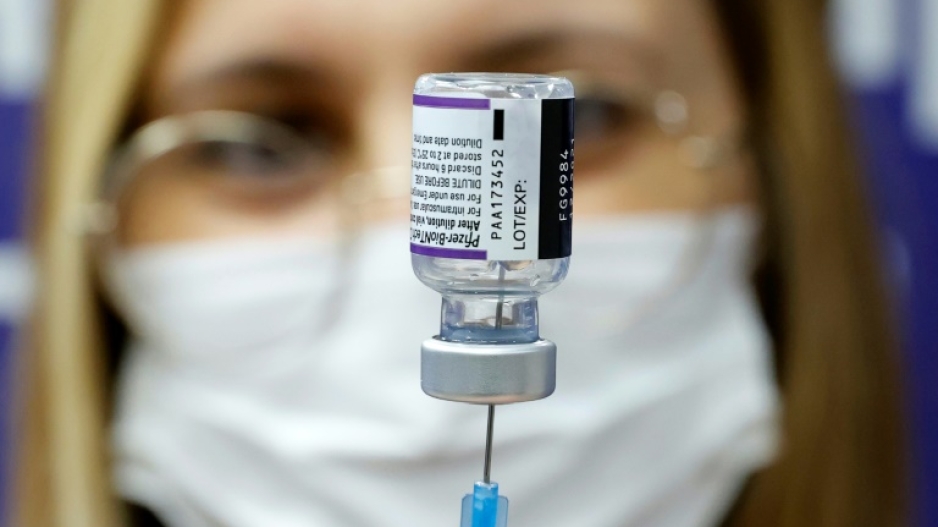 The efficacy of the Pfizer/BioNTech vaccine among kids aged six months to under five years was 80.3 percent

WASHINGTON - The Pfizer/BioNTech COVID vaccine is safe and effective for children aged six months to under five years when given in three doses, the companies said in a statement Monday.

READ: COVID-19 in SA | WHO calls for more vaccinations

The announcement comes as the US Food and Drug Administration (FDA) is planning meetings in the coming weeks to weigh authorizing COVID vaccines among the youngest children, the only age group who are not yet eligible in most countries, a source of concern to many parents.

Pfizer/BioNTech evaluated three doses, given at three micrograms, in a clinical trial and found the vaccine evoked a strong immune response. Side effects were similar in the vaccine and placebo groups.

Vaccine efficacy was 80.3 percent, according to a preliminary estimate.

"We are pleased that our formulation for the youngest children, which we carefully selected to be one-tenth of the dose strength for adults, was well tolerated and produced a strong immune response," said Pfizer CEO Albert Bourla in a statement.

"We look forward to soon completing our submissions to regulators globally with the hope of making this vaccine available to younger children as quickly as possible, subject to regulatory authorization," he added.

The FDA has tentatively scheduled three dates in June where experts will meet and likely decide whether to authorize the Pfizer Covid vaccine for under-fives and the Moderna vaccine for under-sixes, which is given as two shots of 25 micrograms.

The agency was originally set to evaluate the Pfizer vaccine given as two doses in February, but data showed it did not provoke a strong enough immune response in children aged two to four. The FDA then asked to see data for a third shot.

According to the new data, 1,678 children received a third dose at least two months after the second dose, at a time when Omicron was the predominant variant.

An analysis of a subset of participants showed antibody levels were similar to 16- to 25-year-olds who were given the full strength vaccine at two doses.

No new adverse events were identified, and the majority of side effects were mild or moderate.

"Three doses of (Pfizer's) COVID vaccine appear to be very safe and highly effective in preventing not only severe disease, hospitalization, and death from COVID, but even symptomatic COVID at a time when Omicron was the dominant variant," Celine Gounder, editor-at-large for public health at Kaiser Health News told AFP.

"However, we know that protection against SARS-CoV-2 infection and milder symptomatic disease wanes over time," added Gounder, an infectious disease specialist and epidemiologist.

"Pfizer is reporting follow-up data only out to seven days after the third dose of vaccine. It's too early to say how the three-dose series would perform out to several months or a year."

Jeremy Faust, of Brigham and Women's Hospital Department of Emergency Medicine, told AFP: "My first impression is very positive. These numbers are exactly the kinds of signals we wanted to see."

"I wish the two-dose series had worked for Pfizer/BioNTech. It didn't. But the three-dose series appears to have given these very young children the protection we want them to have," the doctor added.

If and when both Pfizer's and Moderna's vaccines are authorized, US parents will have to consider whether they want their children to receive Moderna's two dose vaccine -- which will offer faster protection -- or Pfizer's three doses -- which will take longer to be effective but may ultimately be more protective.

Pfizer's announcement comes one week after US health authorities gave the green light for the company's COVID booster shots to be administered to children age five to 11.

Severe disease from COVID is very rare among under-fives but can occur, with 477 US deaths in this age group since the start of the pandemic, or about 0.1 percent of all deaths.

Children can also contract a rare post-viral condition called multisystem inflammatory syndrome in children (MIS-C), which has affected some 8,210 US children and killed 68.

Like adults, some children who get COVID may go on to develop long COVID, with new, ongoing or returning symptoms, including brain fog and fatigue.