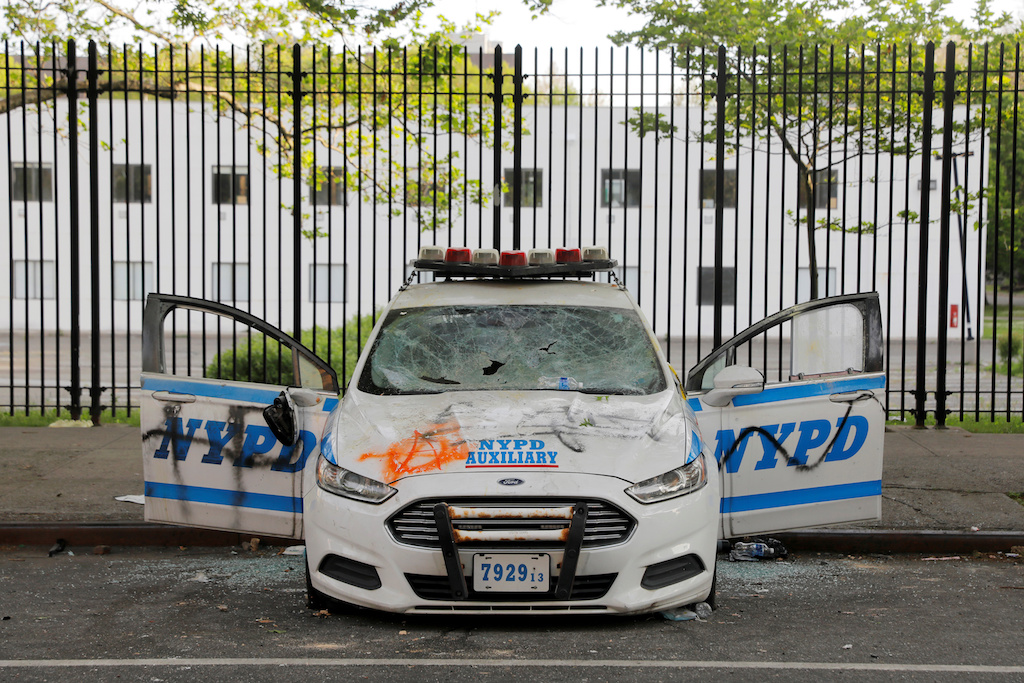 A vandalized New York Police Department vehicle is seen the morning after a protest following the death of African-American George Floyd in Minneapolis Police custody, in the Brooklyn borough of New York City, US, May 30, 2020.

MINNEAPOLIS - Protests flared late into the night in many cities in the United States over the killing of George Floyd, a black man who died this week after being pinned down by the neck by a white police officer in Minneapolis.

The sometimes violent demonstrations hit cities from New York to Atlanta in a tide of anger over the treatment of minorities by law enforcement.

Derek Chauvin, the former Minneapolis police officer shown in video footage pinning Floyd down on the street with his knee, was charged with murder in the case on Friday.

Chauvin, who was dismissed from the police with three fellow officers the day after Monday's fatal encounter, was arrested on third-degree murder and manslaughter charges for his role in the death of Floyd, 46.

In Detroit, a 19-year-old man protesting in the city was shot dead on Friday night by a suspect who pulled up to demonstrators in a sport utility vehicle and fired gunshots into the crowd, then fled, the Detroit Free Press and other local media reported. Police could not immediately be reached for comment.

Hundreds in the city had joined a "March Against Police Brutality" late in the afternoon outside the Detroit Public Safety Headquarters.

Many chanted, "No justice, no peace." Some carried signs that read, "End police brutality" and "I won't stop yelling until everyone can breathe."

In lower Manhattan, demonstrators at a "We can't breathe" vigil and rally were pressing for legislation outlawing the police "chokehold" used by a city police officer in the 2014 death of Eric Garner, who was also black. 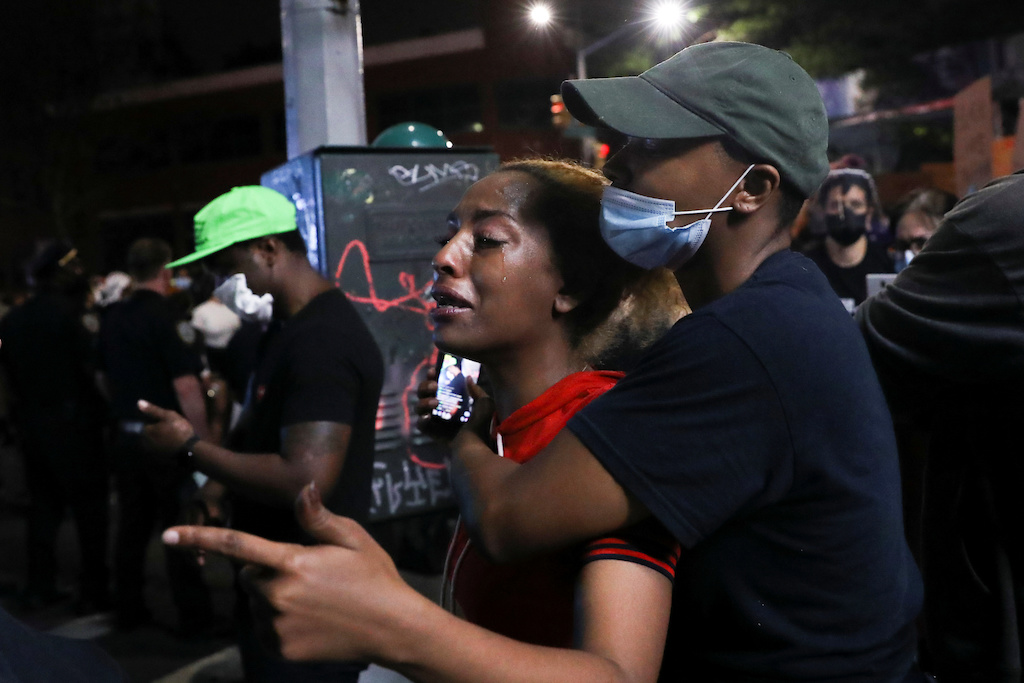 A woman reacts during a protest following the death of African-American George Floyd who was seen in graphic video footage gasping for breath as a Minneapolis Police officer knelt on his neck, in the Brooklyn borough of New York City, US, May 29, 2020.

Protesters also took to the streets in other cities including Denver and Houston.

In Minneapolis, hundreds of protesters defied an 8 pm curfew to gather in the streets around a police station burnt the previous night.

"We are out here because we, as a generation, realize things have to change," said one marcher, Paul Selman, a 25-year-old black man.

The charges brought by Hennepin County prosecutors against the police officer came after a third night of arson, looting and vandalism in which protesters set fire to a police station, and the National Guard was deployed to help restore order in Minnesota's largest city.

Another group of protesters later converged near the city's Fifth Precinct station until police arrived and fired tear gas and plastic bullets to break up that gathering. A nearby bank and post office were set on fire.

Still, Friday night's crowds were far smaller and more widely dispersed than the night before.

Law enforcement kept a mostly low profile, a strategy seemingly calculated to reduce the risk of violent confrontations, as was the case in several urban centers across the country where sympathy protests arose.

Hennepin County Attorney Mike Freeman, announcing Chauvin's arrest, said the investigation into Chauvin, who faces up to 25 years in prison if convicted, was ongoing and he anticipated also charging the three other police officers, identified by the city as Thomas Lane, Tou Thao and J Alexander Kueng.

Floyd, a Houston native who had worked security for a nightclub, was arrested for allegedly using counterfeit money at a store to buy cigarettes on Monday evening. 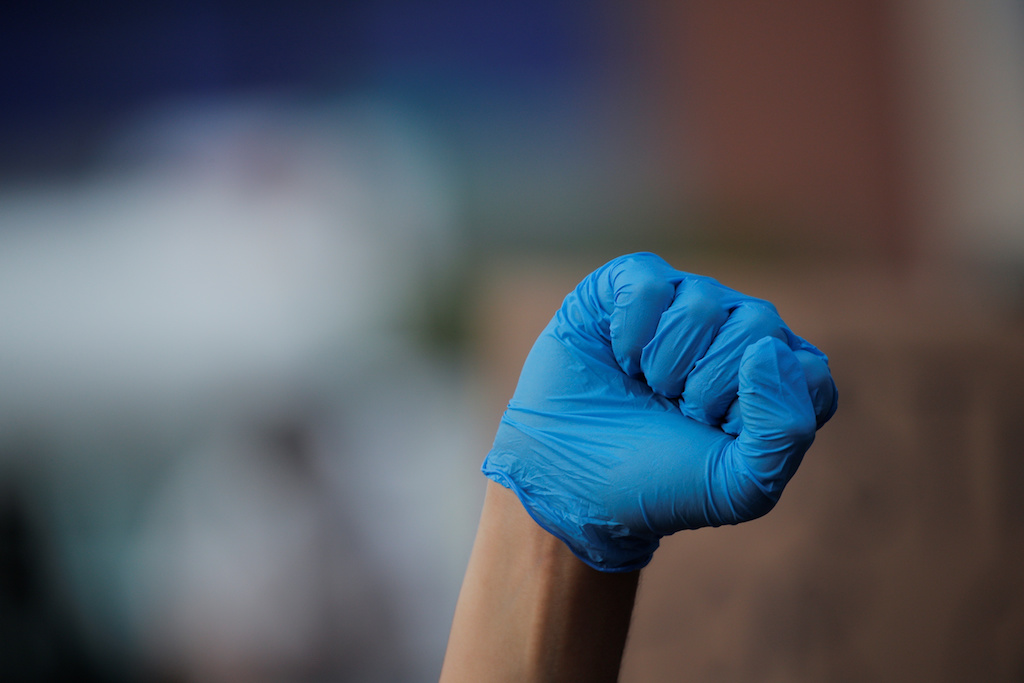 A fist in protective glove is seen raised during a protest following the death of African-American George Floyd who was seen in graphic video footage gasping for breath as a Minneapolis Police officer knelt on his neck, in the Brooklyn borough of New York City, U.S., May 29, 2020. 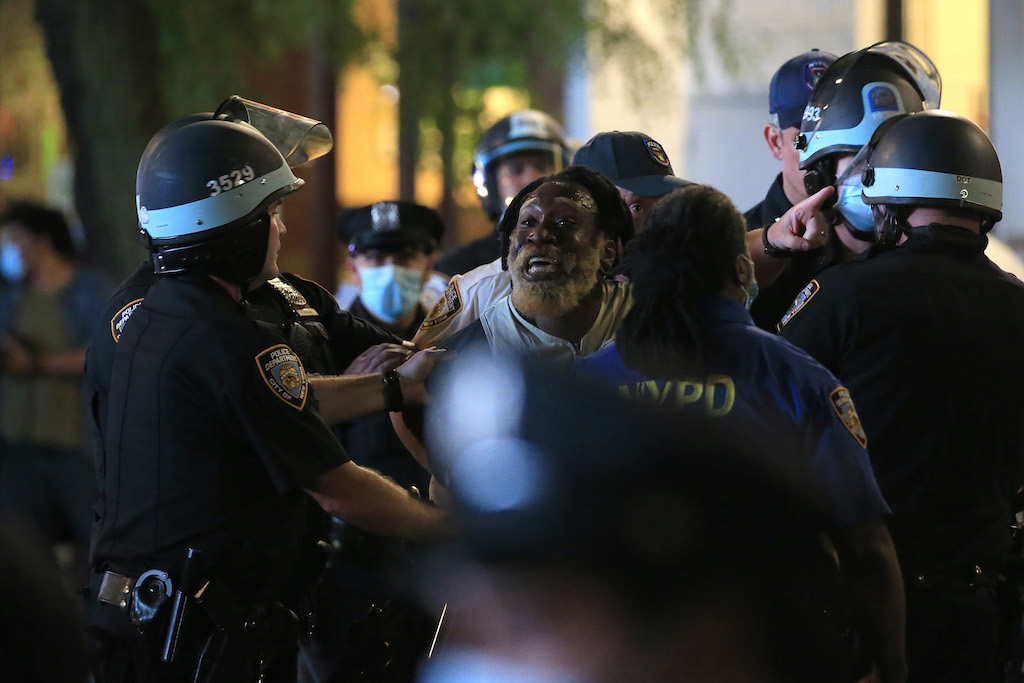 An activist is detained by the New York Police Department (NYPD) as a rally is held in response to the police killing George Floyd in front of Barclays Center on May 29, 2020 in the Brooklyn borough of New York City.

In Washington, police and Secret Service agents were out in force around the White House before dozens of demonstrators gathered across the street in Lafayette Square chanting,"I can't breathe."

The protests erupted and spread around the country this week after video footage taken by an onlooker's cell phone was widely circulated on the internet. It shows Floyd gasping for air and repeatedly groaning, "Please, I can't breathe," while a crowd of bystanders shouted at police to let him up.

The video reignited rage that civil rights activists said has long simmered in Minneapolis and cities across the country over persistent racial bias in the US criminal justice system.

In Atlanta, Bernice King, the youngest daughter of civil rights icon Martin Luther King Jr., implored people to go home on Friday night after more than 1,000 protesters marched to the state capitol from the Centennial Olympic Park, blocking traffic and an interstate highway along the way.

The demonstration turned chaotic and at times violent. Fires burned in downtown Atlanta near the CNN Center, the network's headquarters.

At least one police car was among several vehicles burnt. Windows were smashed at the CNN building, along with store fronts. Police pushed back the crowd, but they hurled bottles at officers. 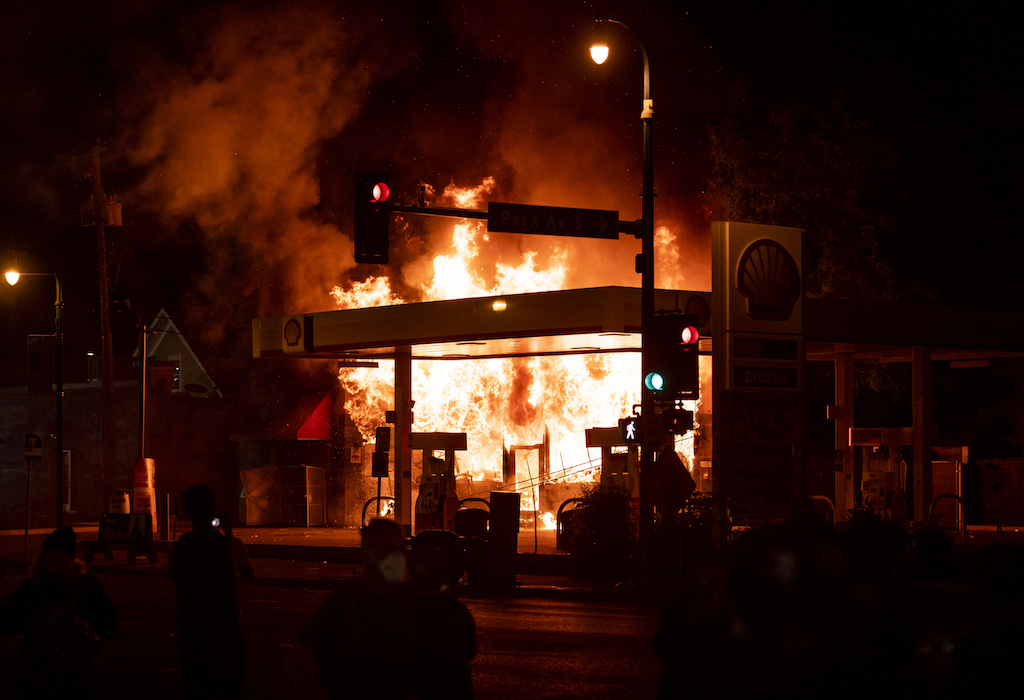 A fire burns at a gas station on Lake Street on May 29, 2020 in Minneapolis, Minnesota. Protests have been ongoing in the state and around the country since George Floyd's death while in police custody on Monday. 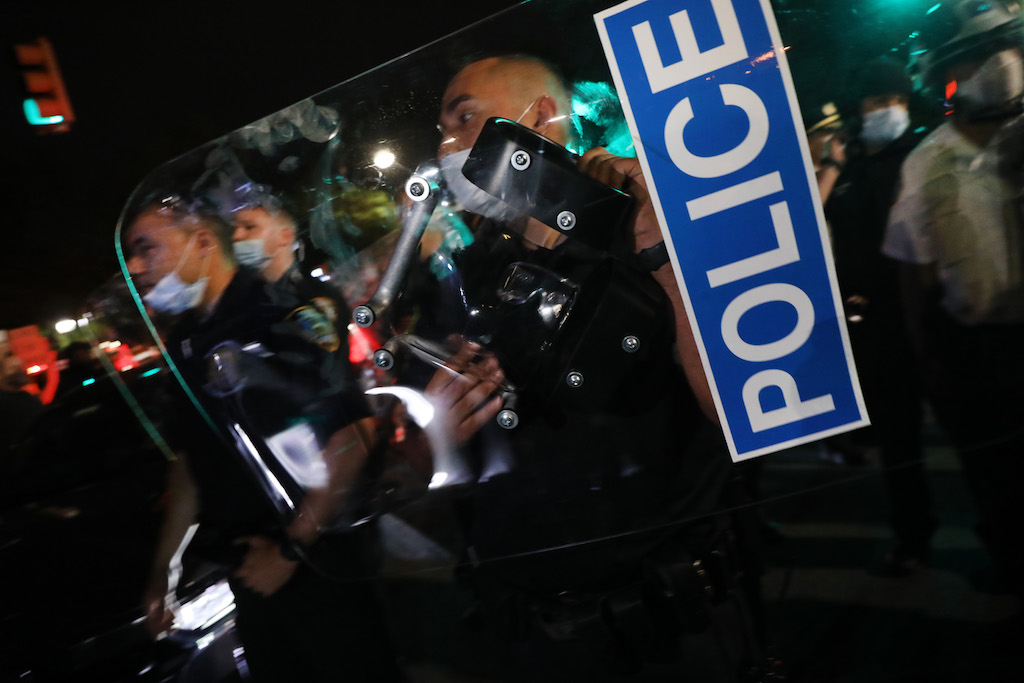 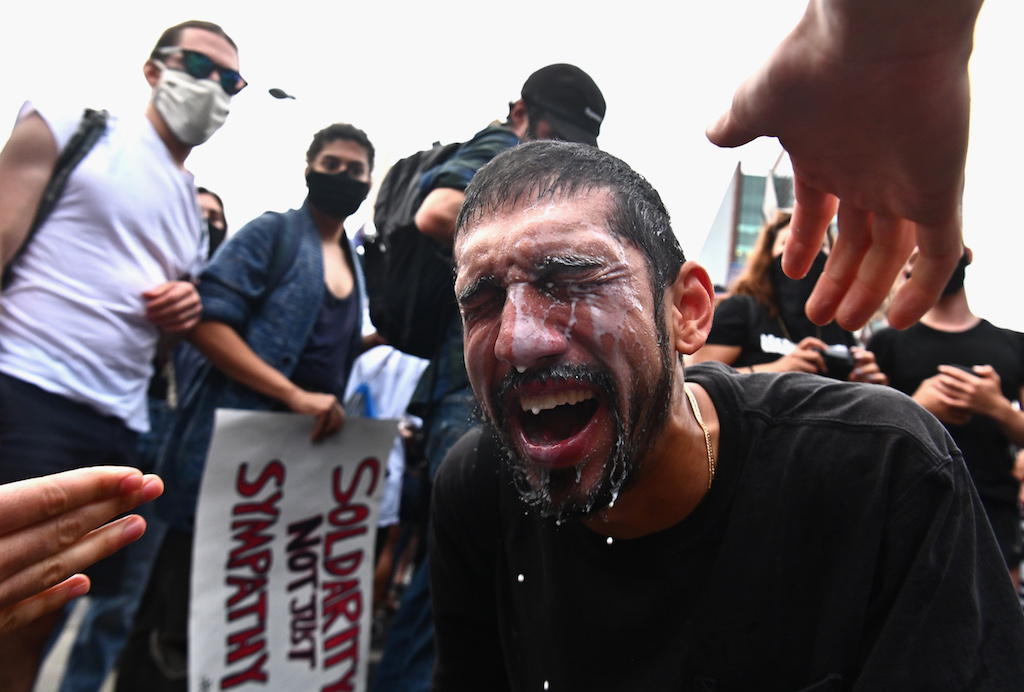 A protestor had milk splashed in his eyes after being struck by tear gas during a "Black Lives Matter" protest near Barclays Center on May 29, 2020 in the Brooklyn borough of New York City, in outrage after George Floyd. 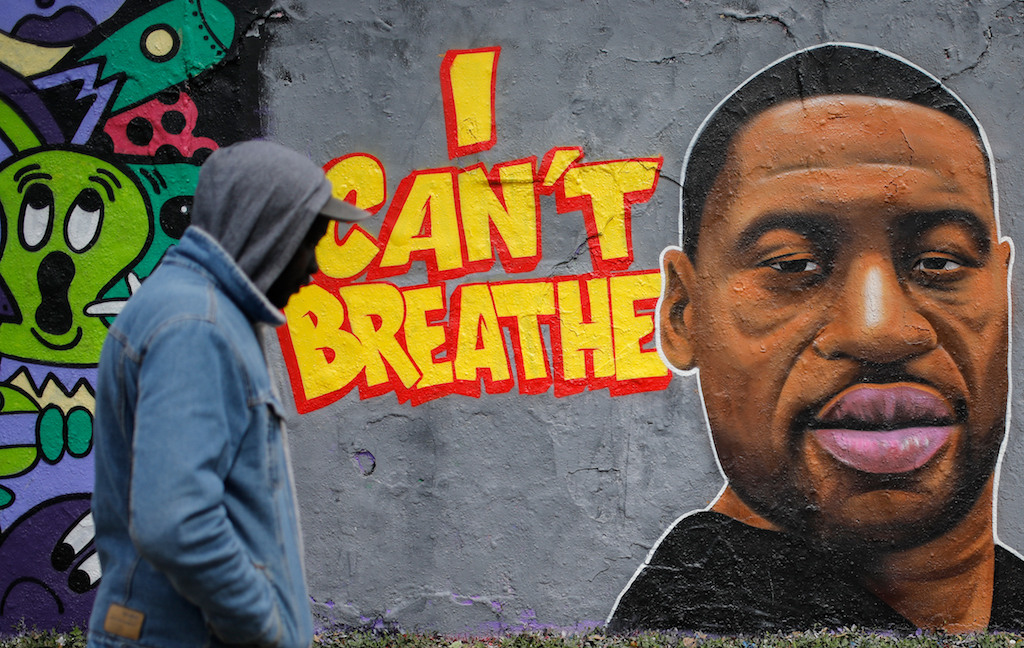 A man walks past a graffiti on a wall depicting a portrait of George Floyd, a black man who died in Minneapolis after a white policeman kneeled on his neck for several minutes, at Mauer Park in Berlin's Prenzlauer Berg district on May 30, 2020.

Protesters face off with police near the Third Police Precinct on May 29, 2020 in Minneapolis, Minnesota. 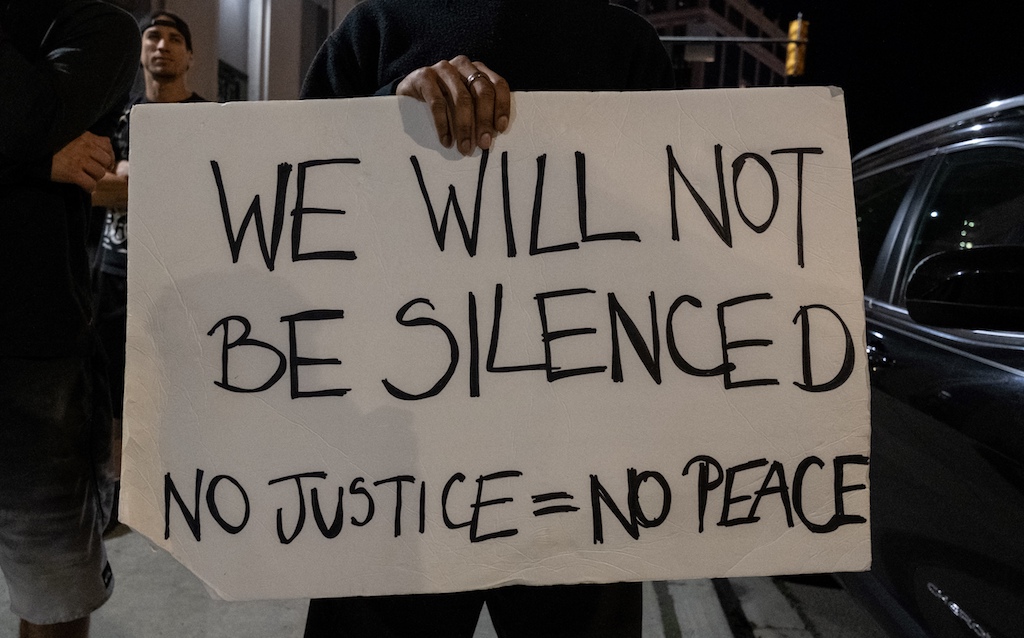 A protester holds a placard during a demonstration in Detroit, Michigan late May 29, 2020, over the death of George Floyd, a black man who died in Minneapolis after a white policeman kneeled on his neck for several minutes.