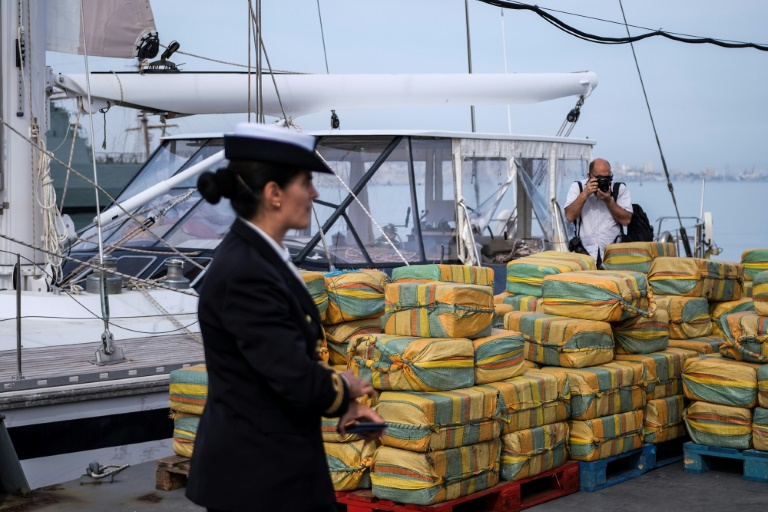 Judicial police chief Luis Neves said it was 'the biggest narcotics haul in Portugal in 15 years'.

LISBON - Portuguese authorities said Monday they had seized a 5.2-tonne haul of cocaine from a Spanish-registered sailing ship, arresting two Spanish citizens and a Peruvian.

Showing off 183 bales of the drug at a navy base outside Lisbon, judicial police chief Luis Neves said it was "the biggest narcotics haul in Portugal in 15 years".

"This is a heavy blow for those who want to flood Europe with cocaine," he told reporters.

Investigators pounced on the ship as part of an operation dubbed "White Tide", in cooperation with Spanish authorities and with support from the US and Britain.

The three men arrested on Saturday are suspected of belonging to a powerful criminal network smuggling large amounts of cocaine from Latin America into Europe.

One is a trafficker already known to authorities and subject to an arrest warrant since March, Spanish authorities said in a statement.

Cooperation between the two countries "lets us send a clear message that it won't be easy to smuggle in Spain and Portugal", Spain's narcotics police chief Antonio Martinez Duarte said.

In Belgium meanwhile, Belgian prosecutors said they had broken up a gang suspected of having smuggled 15 tonnes of cocaine into the country, arresting 27  suspects in raids around the country.

Another suspect was arrested in Spain and in the Belgian raids police seized drugs, weapons and luxury goods.

Spanish authorities on Friday announced they had swooped on a sailing ship carrying 2.5 tonnes of cocaine off Portugal's Azores archipelago, arresting two people on board and three more in the region around Malaga in southern Spain.