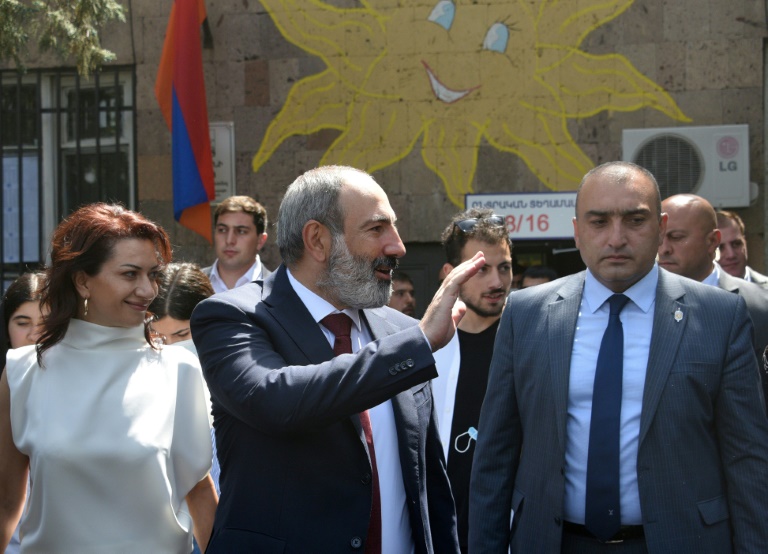 Armenian Prime Minister Nikol Pashinyan, waving to supporters as he heads to a polling station, has lost much of his lustre after a military defeat to Azerbaijan

YEREVAN - Armenians voted Sunday in snap parliamentary elections called by Prime Minister Nikol Pashinyan in an attempt to heal divisions after a disastrous war with Azerbaijan and reaffirm his mandate.

But the reformist leader, who spearheaded peaceful protests in 2018, has lost much of his appeal after a humiliating defeat last year to Azerbaijan over a decades-old territorial dispute and is in a tight race with former president Robert Kocharyan.

"The destiny of our Armenian nation will be decided today," said one voter, 73-year-old Emma Sahakyan.

Analysts say the election result is hard to predict, with both Pashinyan and Kocharyan drawing massive crowds on the eve of the polls and planning rallies after the vote.

The election in the South Caucasus country of three million people was watched by Armenia's Soviet-era master Moscow, arch-foe Baku and Ankara, which backed Azerbaijan in the six-week war over the breakaway region of Nagorno-Karabakh.

Kocharyan, who hails from Karabakh and was in power between 1998 and 2008, appeared in good spirits as he showed up at a Yerevan polling station. 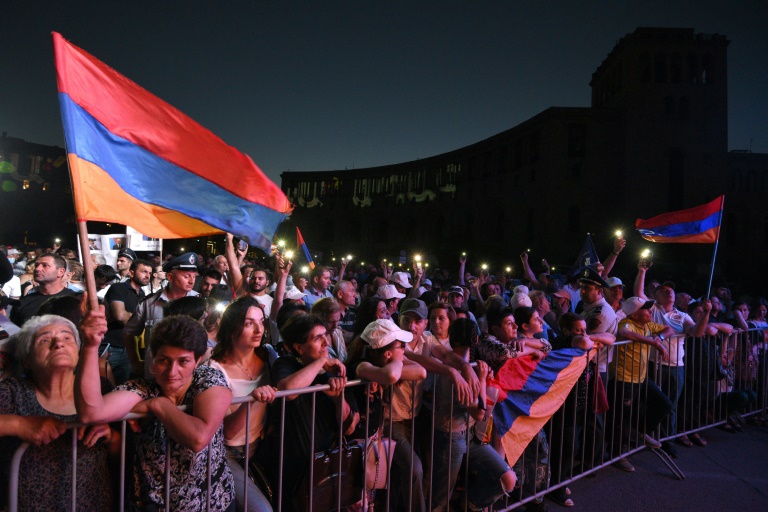 During a campaign marred by polarising rhetoric, Pashinyan said he expected his Civil Contract party to secure 60 percent of the vote

"I voted for worthy peace and economic growth," he said.

Pashinyan wrote on Facebook: "I am voting for the future of our state and people, for the development of Armenia."

During a campaign marred by polarising rhetoric, he said he expected his Civil Contract party to secure 60 percent of the vote, though some pollsters say the estimate is far-fetched.

One voter, Anahit Sargsyan, said the prime minister deserved another chance, adding that she feared the return of the old guard whom she accused of plundering the country.

"I voted against a return to the old ways," said the 63-year-old former teacher. 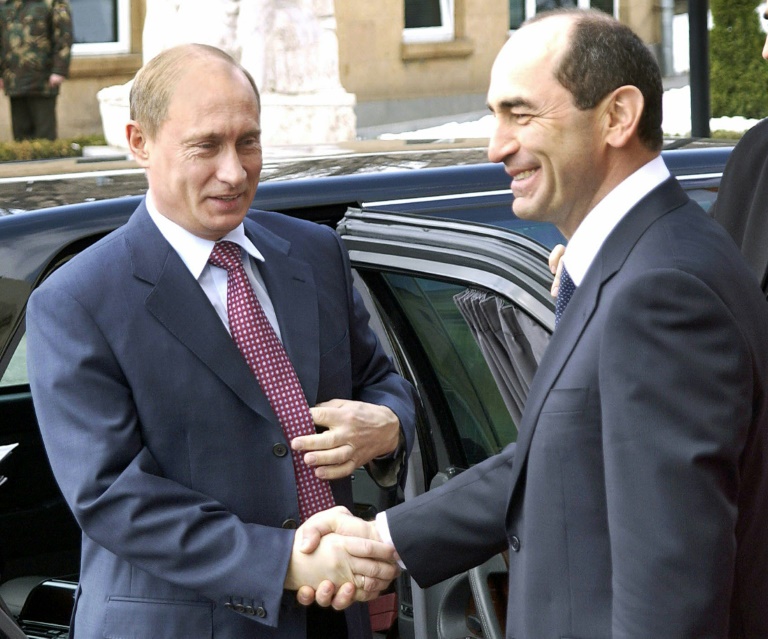 Putin with Kocharyan in 2005

Another voter, Vardan Hovhannisyan, said he cast his ballot for Kocharyan, who calls Russian leader Vladimir Putin his friend.

"I voted for secure borders, solidarity in society, the return of our war prisoners, the well-being of the wounded and a strong army," said the 41-year-old musician.

Despite stifling heat, turnout stood at over 38 percent as of 5 pm.

Critics accuse Pashinyan of ceding territory in and around Karabakh to Azerbaijan in a humiliating truce agreement, and of failing to deliver reforms.

Pashinyan says he had to agree to the Moscow-brokered truce with Azerbaijan in order to prevent further human and territorial losses.

More than 6,500 people were killed in the war, according to the latest official figures from Armenia and Azerbaijan.

Besides Kocharyan, two other leaders of post-Soviet Armenia are backing parties in the race. All three are in opposition to Pashinyan.

Voting was held in a relatively calm atmosphere, but Kocharyan called for a probe into distributors of leaflets condemning him. 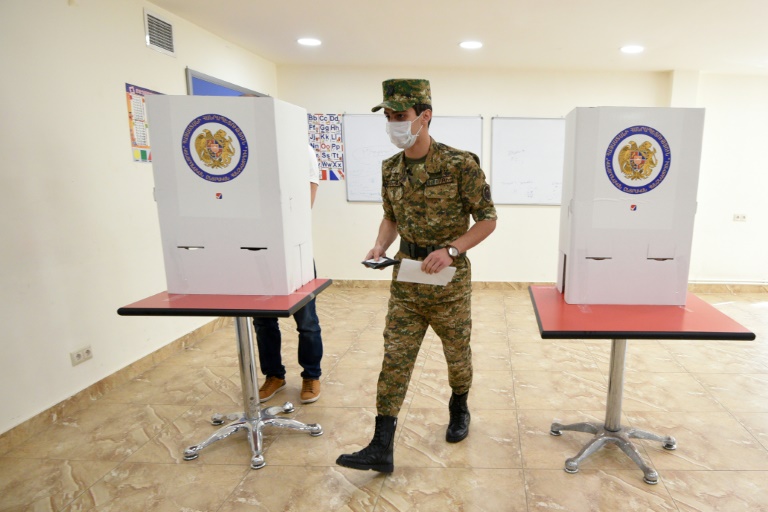 A soldier votes: More than 6,500 people were killed in the war

His bloc also alleged irregularities and said the security service searched its campaign offices in the southern town of Sisian.

Kocharyan was himself accused of rigging a presidential election in favour of his hand-picked ally and presiding over a deadly crackdown on protesters in 2008.

Armenia won international praise for holding its first free and fair vote under Pashinyan in 2018.

A venomous campaign saw candidates exchange insults and threats. Pashinyan, 46, brandished a hammer at rallies, while Kocharyan, 66, said he would be ready to fight the prime minister in a duel.

Following in third with 10.8 percent was an alliance linked to Pashinyan's predecessor Serzh Sargsyan.

A record four electoral blocs and 21 parties are running for election but only a handful are expected to win five-year terms in parliament.

Around 2.6 million people are eligible to vote to elect the minimum number of 101 parliament members under a proportional electoral system. 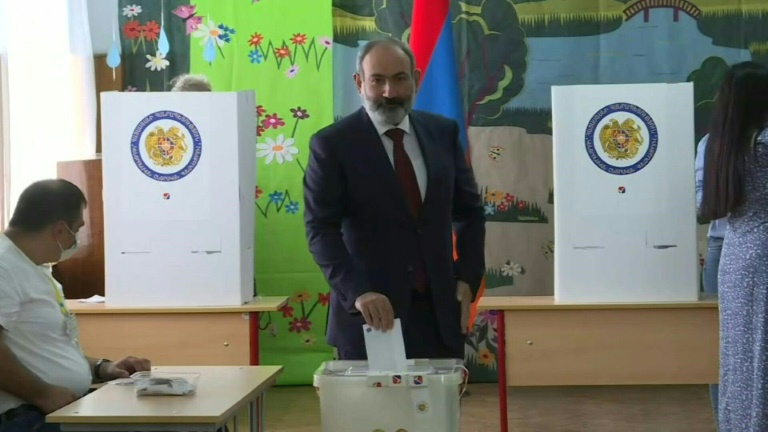 Prime Minister Nikol Pashinyan votes in Armenia's parliamentary elections. Pashinyan has lost much of his appeal after a military defeat last year to Azerbaijan, but hopes to renew his mandate in a tight race with ex- president Robert Kocharyan.