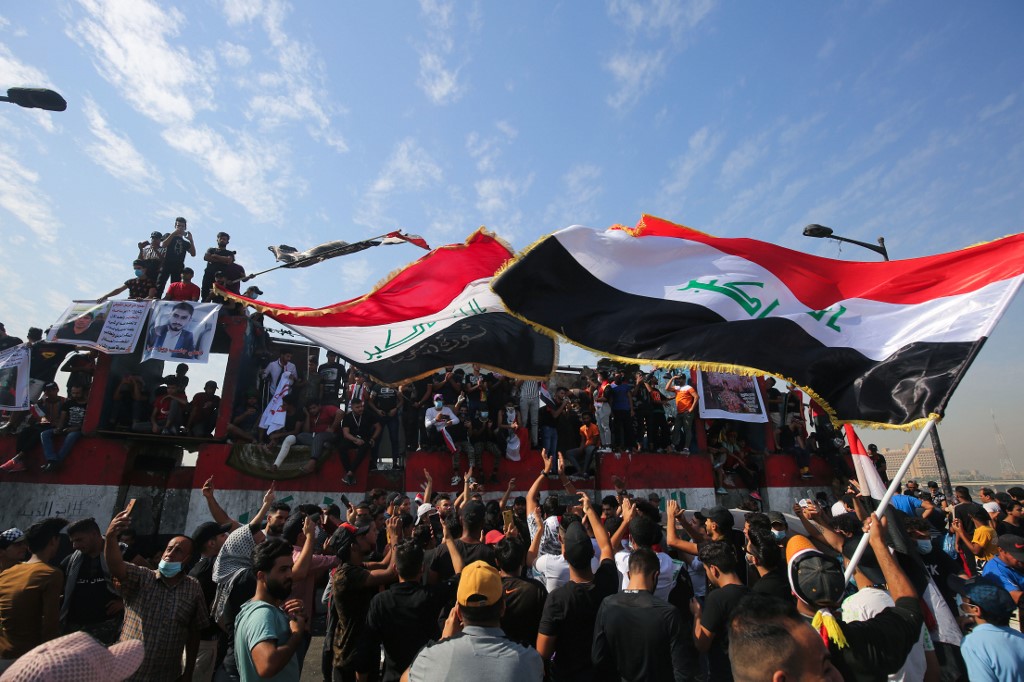 Iraqi demonstrators wave flags as they gather in Tahrir Square in the centre of the capital Baghdad.

NASIRIYAH, Iraq - Anti-government protesters defied lockdowns and the threat of violence to demonstrate on Saturday in several Iraqi cities, with new clashes with security forces claiming the life of one protester.

Tensions were high in several Iraqi cities, a day after clashes between the dwindling members of the October 2019 anti-government protest movement and supporters of populist Shiite cleric Moqtada Sadr.

Sadr had called on his followers to hit the streets in a show of force on Friday, prompting tens of thousands to turn out in the capital Baghdad and other cities.

In the southern hotspot of Nasiriyah, anti-government activists accused the Sadrists of shooting at them and torching their tents in their main gathering place of Habboubi Square late Friday.

Clashes continued into the night, with medics reporting a total of seven dead by Saturday morning, five of them from bullet wounds, and at least 60 wounded.

Nasiriyah was a major hub for the protest movement that erupted last year against a government seen by demonstrators as corrupt, inept and beholden to neighbouring Iran.

Violence also broke out on Saturday night in the southern city of Kut, where a police source told AFP on condition of anonymity that a protester was killed in skirmishes with security forces.

Authorities in Kut had imposed new restrictions on movement at dawn on Saturday and fired tear gas at anti-government demonstrators in an effort to clear out their camp.

The fresh violence has coincided with the one-year anniversary of one of the bloodiest incidents of the 2019 anti-government uprising.

The deaths sparked outrage across Iraq and prompted the resignation of then-prime minister Adel Abdel Mahdi.

His successor, Mustafa al-Kadhemi, has sought to reach out to protesters and set June 2021 as a date for early elections -- a major demand of the youth-dominated movement.

But in Nasiriyah on Saturday, demonstrators were just as enraged at him as they were at his predecessor a year ago.

Despite a curfew imposed in the city since Friday night, outraged protesters gathered at Habboubi Square starting early on Saturday, their numbers swelling throughout the day.

Under an early winter drizzle, the young men erected metal frames and rolled out orange and blue tarps to hang atop them, an AFP correspondent said.

A few carried a poster bearing pictures of both Kadhemi and Abdel Mahdi and the caption: "Two sides of the came coin."

There were no police in sight around Habboubi Square, but a security source told AFP that units had been deployed to the city's edges to seal off access to Nasiriyah to anyone except its residents.

Authorities had sacked the city's police chief, launched an investigation into the events and imposed an overnight curfew in Nasiriyah.

But there is little hope that the official probe would lead to much closure, as families of those who died in last year's rallies say they are still waiting for justice.

On Saturday evening, the massive crowd left Habboubi Square in a memorial march to honour those who lost their lives a year ago, carrying symbolic coffins as they made their way to Zeitun Bridge.

"Submit your resignation, have mercy on yourself and do Iraq a favour," he wrote on Twitter.