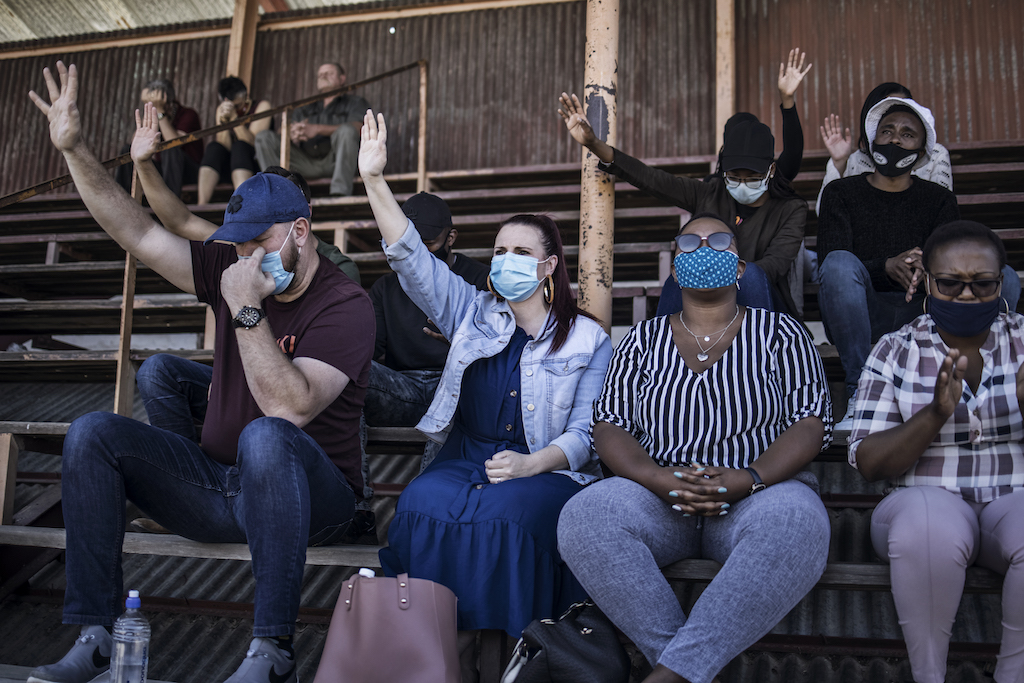 Residents take part in a special mass prayer meeting in Senekal, on October 14, 2020.

SENEKAL - Dozens of Christians prayed for peace and unity on Wednesday in a small South African town rocked by racial tensions after white farmers stormed a courthouse where two black suspects were on trial over the killing of a 21-year-old farm manager.

Black, white and mixed-race worshippers held hands, sitting next to each other in the stands of an agricultural exhibition arena in Senekal during the lunchtime prayers.

The sleepy town sparked international headlines after the protesting farmers burst into the hearing last week.

One of the suspects had been arrested 16 times before the latest arrest over the murder early this month of Brendin Horner, according to Police Minister Bheki Cele.

On Wednesday the faithful, some waving placards, came together to pray that tensions do not ratchet up further on Friday when the trial resumes.

One placard showed a biracial handshake with a caption reading "Brotherly Love".

Another, written in English, Afrikaans and Sesotho, read "Love all, Dare to love farmers".

"We are here to pray for Senekal and to pray for our nation," said John Mathuhle, 39, a black pastor with the Christian Revival Church in the town some 300 kilometres south of Johannesburg.

Mathuhle said what was meant to be a "peaceful" protest by the farmers outside the courthouse, unfortunately, "didn't really end well".

"So as a result of that we had a lot of racial tension."

"We just pray for peace. Civil war will not start in Senekal and that is what we are here to say, no to civil war, no to racism, no to farm killings."

Pearl Kupe, a lawyer who drove from Pretoria for the prayer session, said "it's very important for South Africa to stand in unity at this time".

She said South Africa faced a general problem of murder and that it should be tackled as such.

"We must not categorise it specifically to say the problem is against farmers," she said.

She called on political parties not to exploit the tensions, which she warned could sow "more division and more strife".

EFF leader Julius Malema on Tuesday warned he would mobilise supporters to descend on Senekal on Friday when the two defendants return to court.

"We are going to face white men face-to-face," Malema said in Johannesburg two days after he tweeted a picture of a rifle.

He also faces a possible charge of terrorism, according to the prosecuting authority.

Jean Labuschagne, 37, who grew up in Senekal but now lives in the nearby town of Bethlehem, discouraged people from gathering at the courthouse on Friday.

"It just needs a small spark to light a whole bushfire," he said. "I will encourage people to stay at home".

"Killings on farms are not ethnic cleansing," he said in a weekly newsletter. "They are not genocidal. They are acts of criminality and must be treated as such."