The controversy surrounding President Cyril Ramaphosa and his CR17 campaign funding has taken another twist. Courtesy of #DSTV403

JOHANNESBURG - The controversy surrounding President Cyril Ramaphosa and his CR17 campaign funding has taken another twist.

News24 has published details of what it says are leaked emails between Ramaphosa and his campaign manager, ahead of his ANC presidential campaign of 2017.

The news site says it's verified the communication, and the emails have been circulated among his political opponents and by anti-Ramaphosa accounts on social media.

Public Protector, Busisiwe Mkhwebane, made reference to emails when she found that Ramaphosa misled Parliament about the source of the Bosasa donation to his campaign.

Mkhwebane has not said how the emails she received were obtained.

Ramaphosa previously claimed he wasn't involved in fundraising efforts but the emails show he was asked to make contact with some donors.

There's no indication from the emails that Ramaphosa has done anything illegal.

eNCA has tried to get comment from his campaign manager and the office of the Presidency.

END_OF_DOCUMENT_TOKEN_TO_BE_REPLACED 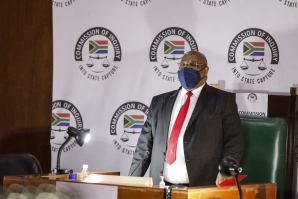