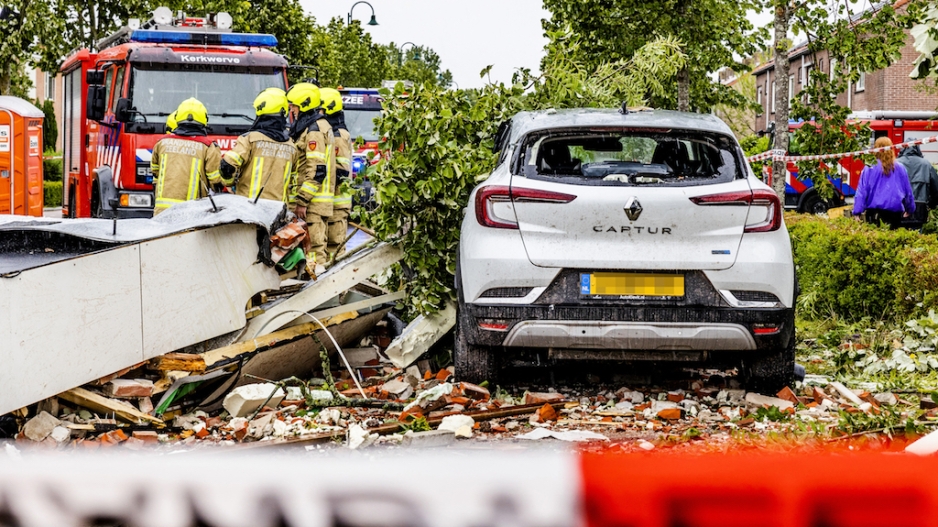 A damaged car after a tornado hit Zierikzee in the Netherlands. AFP/ANP/Sergey Bobok

AMSTERDAM - A tornado ripped through a city in the Netherlands on Monday, killing at least one person and injuring 10 others in the first fatal twister to hit the country for three decades.

The whirlwind left a trail of destruction through the southwestern seaside city of Zierikzee, blowing the roofs off four homes and sending debris flying into the air.

"There was one fatality in the tornado. In addition, the first picture is about 10 more injured. Emergency services are still busy mapping out the total size," the Zeeland province safety authority said in a statement.

"The damage is considerable in several streets in Zierikzee. In addition to flying roof tiles and fallen trees, roofs have been blown off four houses."

Images on social media showed debris thrown high into the air on a column of rotating wind.

Others showed a large white funnel of clouds extending from the base of a darkened sky, as people stopped their cars or left their restaurant tables to watch.

"The whirlwind kept getting bigger. It reminded me of American films, with those storm chasers," resident Maurice van den Nouweland was quoted as saying by the Dutch national news agency ANP.

"It felt like the room was being vacuumed," added another resident, Douwe Ouwerkerk, who was at home when the tornado struck.

He said he saw "roof tiles, a garden pool, something that looked like a tent" lifted off the ground.

Tiles were ripped from the roof of a church and trampolines were sent flying through the air, Dutch public broadcaster NOS said.

The front of one house completely collapsed, it said.

As many as 20 rental homes were left temporarily uninhabitable by the whirlwind and officials were arranging shelter for the residents, the local housing association said.

One of those injured was a worker who was renovating one of the properties, it said.

Emergency services asked people to stay away from the area to avoid hindering the work of police and the fire brigade, and because of the danger from falling tiles and branches.

The Netherlands experiences several tornadoes a year but the last fatal one to hit the country was in 1992, the Dutch meteorological agency KNMI said.

"Heavy whirlwinds, also called a tornado, are rare in our country," the KNMI said on its website after Monday's twister.

"The area in which they occur is usually no larger than a narrow track of two to several tens of kilometres in length and a few hundred meters in width."