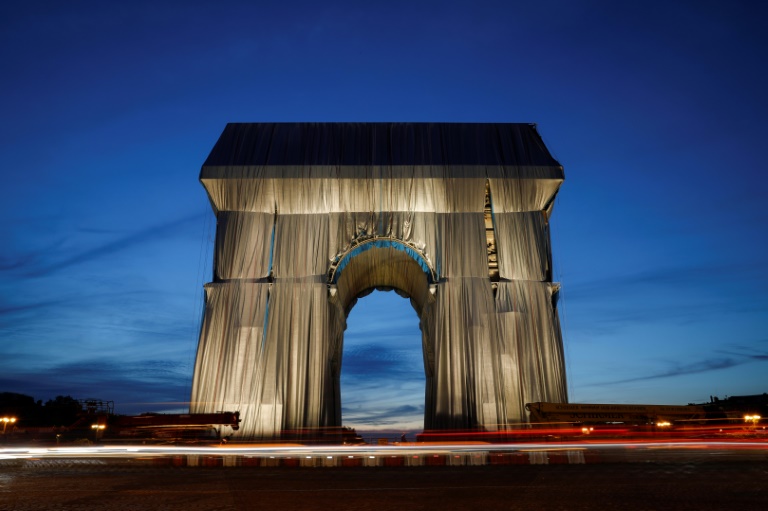 Bulgarian-born Christo had dreamt of wrapping the war memorial since living nearby in the 1960s. AFP/Geoffroy van der Hasselt

PARIS - The entire 50-metre-high Arc de Triomphe has been wrapped in fabric, fulfilling the long-held dream of late artist Christo.

After weeks of preparation, the finishing touches are being put to the transformation of one of France's most iconic monuments ahead of its opening to the public this weekend.

Culture Minister Roselyne Bachelot called it "a posthumous testament to an artistic genius" and "a wonderful gift to Parisians, to the French, and to all art-lovers."

The imposing war memorial has been wrapped in 25,000 square metres of silver-blue recyclable polypropylene.

It is the signature of Christo, the Bulgarian-born artist who died last year, who had dreamt of sheathing the monument since renting a nearby apartment in the 1960s.

Despite completing other major public works during his lifetime, including wrapping the oldest bridge in Paris in 1985 and the German parliament in 1995, the Arc de Triomphe project never materialised before his death.

The completion of his vision -- and that of his co-designer and wife Jeanne-Claude -- has been overseen by his nephew Vladimir Javacheff in coordination with the Pompidou museum and French authorities.

"Christo always said the hardest part is getting the permissions," Javacheff told reporters with a smile.

Protective barriers will be removed on Saturday, allowing the public to get up close to the transformed monument.

The wrapping will then stay in place until 3 October.